China to Present Its “World View” on Internet 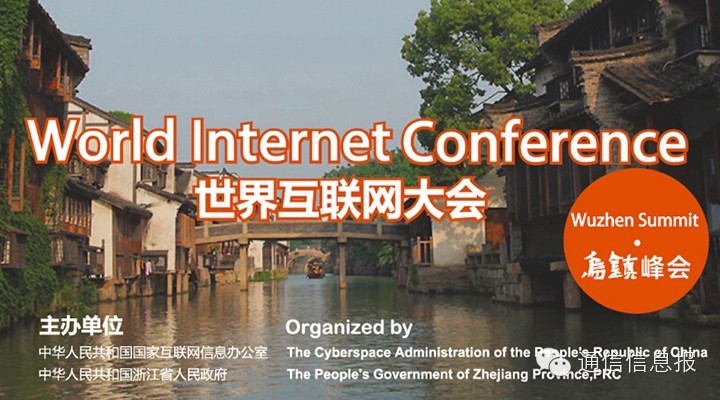 The southern canal city of Wuzhen will host China’s World Internet Conference November 19-21. The CEOs of China’s biggest Internet companies–Alibaba, Tencent, and Baidu–will be in attendance, as will LinkedIn chairman Reid Hoffman. The conference will be put on by the Cyberspace Administration, formerly the State Internet Information Office. While the conference outwardly seeks to “promote the development of (the) internet to be the global shared resource for human solidarity and economic progress,” openness is not a goal, according to the Guardian:

A session titled Constructing a Peaceful, Safe, Open and Cooperative Cyberspace is described as closed-door and for invited guests only.

Some journalists registered to attend the conference were sent notices on Monday laying down rules for reporting.

“If the conference has not arranged an interactive session, please do not ask questions or interview at the scene,” it said, adding: “During the meeting please do not walk about at will within the venue.” [Source]

While reporters do have access to the uncensored Internet at the conference venue, Cyberspace Administration czar Lu Wei has spoken candidly about the “power to choose my friends” when it comes to which websites are accessible behind the Great Firewall.

Those friends have dwindled in the past few days. EdgeCast, a content delivery network (CDN) owned by Verizon, has just been blocked in China. Organizations like Chinese Internet watchdog Greatfire.org have used cloud-based services such as EdgeCast to benefit from “collateral freedom”–in order to block one site hosted by the service, China would have to block the service itself, with consequences for businesses relying on the same service. As Greatfire.org explains, the Chinese government now seems willing to accept the economic consequences:

We have acknowledged all along that our method of unblocking websites using “collateral freedom” hinges on the gamble that the Chinese authorities will not block access to global CDNs because they understand the value of China being integrated with the global internet. However, we can now reveal publicly that the authorities are doing just that – attempting to cut China off from the global internet.

We have seen instances of “collateral damage” due to “collateral freedom” over the past few days and have received emails from some smaller website owners wondering why their non-sensitive sites are being blocked by the great firewall.

[…]The great firewall (GFW) is attempting to block access to our collateral freedom mirror sites, which are hosted in the global cloud infrastructure. GFW cannot distinguish traffic to our mirror sites and other traffic to the cloud provider which means that they cannot block access to our mirror sites without blocking access to the all sites hosted by the CDN. We are forcing the authorities to make a decision between allowing uncensored access to the global internet or blocking global CDNs all together, which will come at a significant economic cost.

In the case of EdgeCast, the authorities have chosen to block access to their service altogether and as a result, they have taken down tens of thousands of websites in one foul swoop. The blocking of such a considerable number of websites in one instance will likely result in significant economic loss as many businesses will be impacted. [Source]

Websites affected by the EdgeCast block include those of The Atlantic, Sony Mobile (both global and Chinese sites), and Drupal. The corporate portal of the international bank HSBC, which is on the CDN Akamai, has also been blocked.

Against this backdrop, China is presenting its own “world view” of the Internet at this week’s conference, China Media Project’s David Bandurski told Bloomberg. “Censorship, on a real-time basis, is the vision China is presenting. They are saying ‘It’s possible. We are big, we are worth a lot of money and we insist on control.’” But on the World Internet Conference website, Beijing News turns this notion of a separate vision for the Internet on its head:

The man’s impermeable wit culminated when he pointed out that “the censorship covers all country and the entire corporate world”.

“The cyberspace in China is a free world, and the country’s management regarding Internet has never done anything to be ashamed of.” Lu Wei concluded with his signature self-confidence. [Source]

At Quartz, Heather Timmons notes that invitations to the conference were only sent out a month ago, and that only 1,000 participants are expected–the vast majority of whom are Chinese. China has been less than welcoming to foreign Internet companies. Facebook, YouTube, and Twitter are blocked outright. LinkedIn, which will be represented at the conference, launched a simplified Chinese site earlier this year. The launch required giving a significant slice of the Chinese operation to local venture capital firms, besides allowing censorship. The CEO of Qualcomm, the recent target of a Chinese anti-trust probe, will also attend.

Read more about Lu Wei and Internet censorship from CDT.