Hu Deping on Rule of Law and Political Reform 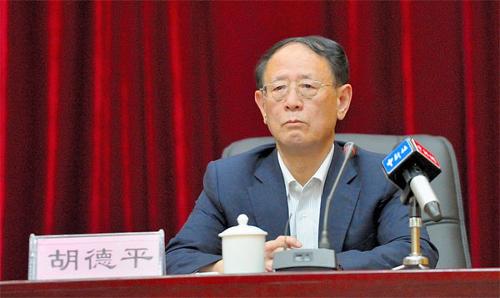 Economist and politician Hu Deping may be best known as the son of Hu Yaobang, the party leader and reformer whose death in April 1989 triggered student protests in Beijing and throughout China. The younger Hu accepted an interview with Beijing News today, and talked about the “sense of terror” he felt during Bo Xilai’s “beat black” campaign, and his thoughts on reform after the Third and Fourth Plenums of the 18th Party Congress. From a translation at China Media Project:

The Beijing News: One year on from the 3rd Plenum of the 18th Central Committee, which raised the issue of “comprehensive reform” (全面改革), could you talk about your ideas about reform?

Hu Deping: There was a period of time [recently], especially when Bo Xilai was in the midst of his “Singing Red and Striking Black” (唱红打黑) in Chongqing, when I felt truly terrified. Wang Lijun said publicly: If only political problems could be changed into legal questions and then be investigated, then we would have an absolute say (发言权). I once wrote a letter to the Central Committee saying that these words were quite terrifying. After that, I made my opinion known publicly, arguing that judicial work [in our country] was going wrong. After the 18th National Congress, the Central Committee talked about comprehensive reform, about punishing corruption, and rule of law started heading in a good direction . . . and my sense of terror started to abate. This time, the Central Committee raising the issue of comprehensively promoting rule of the nation according to law (依法治国), this is major progress.

The Beijing News: The 4th Plenum has just passed. What most made an impression on you about this meeting?

Hu Deping: What most made an impression was that the Party talked about using rule of law to promote the modernization of the country’s governance system and governing capacity. This suits the real circumstances in China, and it also adopts the fruits of the development of human civilization. For example, the emphasis on the authority of the constitution, on checking public power, and protecting individual rights, etcetera. [Source]

Hu Deping recently took over as publisher of Yanhuang Chunqiu, potentially saving the liberal magazine from more direct government oversight. Yanhuang Chunqiu is already under closer official scrutiny after it was forced to switch affiliation from the Association for Yan Huang Culture of China to the Chinese National Academy of Arts, the latter being administered directly by the Ministry of Culture.

Hu Deping has written about rule of law and prospects for political reform before, such as in commentary on the Wukan protest in 2011 (translated by CDT):

I hope that the Wukan Incident can push society into establishing a system which takes democracy and the rule of law as its foundation. I hope that from now on, when society meets similar types of issues down the line, people will be able to solve them using rule of law and negotiations. The government has recognized the cadres and autonomous organizations chosen by the people of Wukan. I think this is significant. I hope this can continue and have a positive ending. [Source]

Events in Wukan have not developed as Hu hoped. Despite his optimism after the Fourth Plenum, many others feel that reforms under President Xi Jinping’s leadership are failing to address systemic problems. Responding to Xi’s promotion of “consultative democracy” in September, Renmin University professor Zhang Ming remarked that Xi “didn’t spell out any fundamental political change to restructure one-party rule, or introduce Western-style democracy.” New York University lawyer Jerome Cohen describes the spirit of Fourth Plenum reforms as “law as the pre-eminent expression of central power,” though he sees hope for real change at lower levels of power. At China Media Project, Qian Gang has been following the “roller coaster ride” of constitutional rhetoric over the past two years, and what it means for reform.