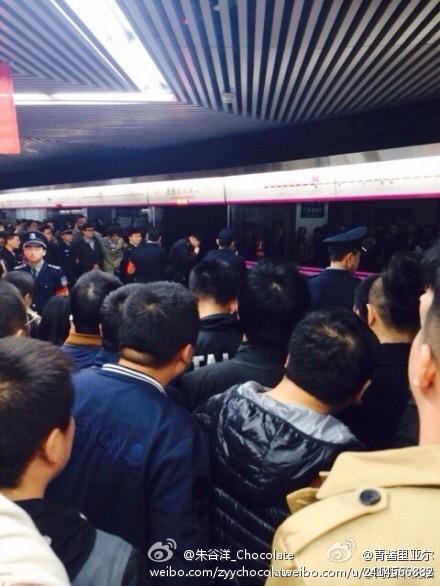 All websites must take care to delete the Caixin article “Passing Through the Subway: Pan Xiaomei, Migrant Mother in Beijing.” (November 10, 2014)

The Caixin report identifies Pan Xiaomei as the woman who died on November 6 when she got stuck between the train doors and the safety doors in a Beijing subway station. Passengers tried to alert the conductor by pounding on the doors, but the train pulled away, dragging Pan down. She died that evening at the hospital.

Car traffic is being strictly limited in Beijing while the APEC summit goes on–license plates ending in even and odd numerals alternate days on the road. The traffic restrictions could add one million subway passengers during the summit, according to an earlier report by Caijing, cited by the South China Morning Post’s Nectar Gan.

The central government is trying to show Beijing at its best– even better than its best–during APEC. Websites have been warned to delete negative comments about APEC. A story about a horrific transportation accident befalling a migrant worker living in the capital without a Beijing hukou (household registration) does not compliment these efforts. Caixin was stymied in its investigation of Pan’s life and death:

It was difficult to obtain information about the deceased. The subway corporation, the Public Security Bureau (PSB), and even the hospital all refused to say a word on the matter. After the accident, this Caijing reporter rushed to the China-Japan Friendship Hospital, where Pan Xiaomei was being treated, only to learn that her remains had already been sent to the PSB for autopsy.

[…] The market [where Pan worked] was desolate. Only a few customers dotted the quiet store. “We were so close to her. The day after (the accident), everyone cried.”  A male coworker, who was unwilling to give his surname, told Caijing, “Till now, I can’t accept that it’s true.”

A similar accident happened in Shanghai in July 2007.