Web Portals Pledge to Help Clean Up the Internet 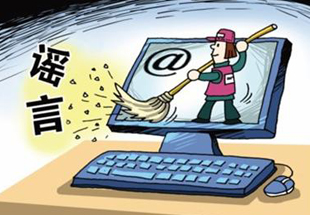 Over the past two years, central authorities and legislators have made many moves towards allowing stricter state control of the Internet by tightening control over social media, drafting rules to create a “favorable online environment,” actively targeting and prosecuting online “rumor-mongers,” launching an anti-vulgarity drive that commentators have noted may have wider implications, and further regulating online video. Following a Thursday meeting of the Cyberspace Administration of China (CAC), China’s main Internet regulator, a fresh anti-pornography/rumor campaign was announced, and many of the country’s major Internet companies have signed a written pledge to aid in these efforts. At Reuters, Adam Rose reports:

Internet giant Tencent Holdings Ltd, Sina Corp and Sohu.Com Inc were among 29 websites that signed the pledge, after the Cyberspace Administration of China (CAC) held a meeting to discuss the topic.

The websites promised that users would respect “laws and regulations, the socialist system, the national interest, and the legal rights of citizens”. They would not publish comments that reveal state secrets, harm the reputation of the country, or “destroy national unity”. […] [Source]

At his China Copyright and Media blog, Rogier Creemers has translated the pledge letter in full.

At Bloomberg Businessweek, Christina Larson reports on the far reach of the new campaign:

The targets will not only be traditional Web pages, but also videos and messages shared over social media platforms, data files stored in the cloud, and streaming video on smart TVs. The Cyberspace Administration of China (CAC) expects to shut down several content providers deemed to have an adverse “severe impact,” as CAC official Liang Lihua told the state-run Xinhua News Agency. […] [Source]