Ilham Tohti Students Among Many Sentenced in Xinjiang 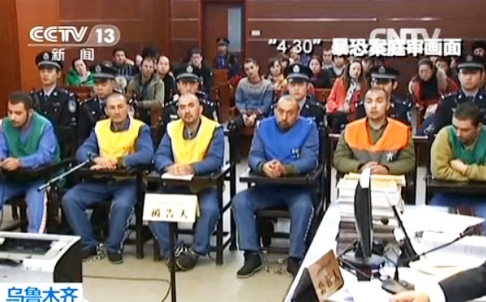 An Urumqi court has sentenced eight to death for their involvement in two separate attacks that killed dozens in Urumqi earlier this year—the first on April 30 at a major train station, the other on May 22 at a public market. The same Urumqi court also delivered sentences for the separate trial of former students of Uyghur scholar Ilham Tohti, whose own life sentence for separatism was upheld by the court late last month (more on Ilham Tohti’s students below). These sentences come amid a yearlong “people’s war” against terrorism launched in response to a spike in violent incidents attributed to separatists and religious extremists. The AP reports:

A Chinese court has sentenced eight people to death for leading terror groups and setting off explosives in two attacks that left 46 people dead in the far western region of Xinjiang, home of the Muslim Uighur minority, state media said.

[…] CCTV said two men were sentenced to death for the train attack. The defendants said they had been instructed by a man outside China to carry out the attack. CCTV said the man was connected to the East Turkestan Islamic Movement, a group that China has designated a terrorist organisation.

[…] Initial state media reports said the [May 22] attack was the work of a five-member terror group, including the assailants who died. However, CCTV said on Monday that six people were sentenced to death on charges of terrorism, use of explosives and endangering public safety. [Source]

The New York Times’s Edward Wong reports that others were handed a range of lighter sentences for their involvement in the attacks, notes that the same Urumqi court also sentenced former students of Ilham Tothi for separatism, and summarizes the results of other recent trials in Xinjiang:

The People’s Intermediate Court in Urumqi, the capital of the Xinjiang region, said an additional five people were given suspended death sentences, which usually means life in prison. One person was sentenced specifically to a life term, and three others were given sentences ranging from five to 10 years.

[…] Those sentenced on Monday all appeared to be ethnic Uighurs, judging from the names printed in the state news reports.

The same court also sentenced seven students of Ilham Tohti, a Uighur academic and frequent government critic, to prison terms ranging from three to eight years on charges of belonging to a separatist group, said Li Fangping, a lawyer for Mr. Tohti, who is serving a life sentence. The sentencing of the students — six ethnic Uighurs and one member of the Yi minority — was not reported by the state news media, but Mr. Li said he learned of the decision on Monday from a lawyer for the students. […] [Source]

While Chinese-language state media still hasn’t reported on the students’ sentences, an English-language report from the Global Times cites Ilham Tohti’s lawyers on the court’s verdicts:

The court ruled that the students actively participated in Tohti’s separatist activities and sentenced them to jail terms of between three years to eight years, according to Li Fangping and Liu Xiaoyuan, Tohti’s lawyers. Li said that one student was sentenced to eight years imprisonment and that two other students were sentenced to seven years behind bars.

“The others were sentenced to five years, three and a half years and three years, respectively,” Li said, without saying which student received what jail term. Whether the verdict was handed down on Monday or earlier could not be confirmed. “The verdict was not as harsh as [I had] expected,” Li said. The students were charged with separatism, the same crime Tohti was convicted of in September.

Shohret Nijat, Perhat Halmurat and Luo Yuwei have testified against Tohti on TV. They stood trial at the Intermediate People’s Court of Urumqi on November 25. [Source]

The Global Times coverage seems to draw from a comment lawyer Li Fangping made from his Weibo account, noting that the verdicts imply the court’s decision is focused more on Ilham Tohti than on the students themselves:

李方平律师: The sentences meted out to Ilham’s students are lower than expected, from three to eight years. Looked at from the perspective of similar cases, this court decision is aimed at their teacher. (December 8, 2014)

On Twitter, lawyer Liu Xiaoyuan clarifies that these sentences should not be considered “light”:

This afternoon, the Urumqi Intermediate Court found seven members of Ilham’s “separatist criminal clique” guilty of actively participating in Ilham’s separatist criminal activities, constituting the crime of separatism. They were each given fixed prison terms between three and eight years. Among them, one was sentenced to eight years, two to seven years, and one to three years. There are three others whose exact prison terms I don’t know, but they could be between three and six years.

According to the penal code, active participants should be given prison sentences between three and ten years. Except for the one student who was given a three-year sentence, then, the other sentences can’t be considered light.

Ilham Tohti was widely regarded as a moderate voice for Uyghur advocacy, and his life sentence was one of the harshest recently delivered to a government critic in China. Prior to The Uyghur scholar’s sentencing in September, writer Wang Lixiong predicted that authorities’ goal may be to clear the ideological middle ground, legitimizing the heavy-handed crackdown in Xinjiang. For more on violence in Xinjiang and the ongoing crackdown on terrorism in the region, see prior CDT coverage.