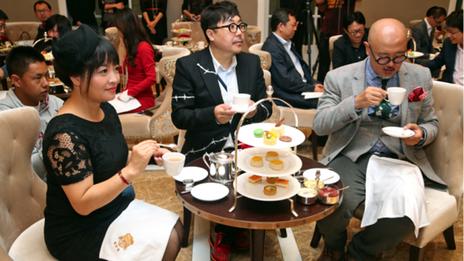 At BBC, Virginie Mangin looks at the growing popularity of high-end etiquette courses among China’s newly rich, who are willing to pay large sums to cultivate Western manners needed to gain a competitive edge in international social and business settings.

The course entitled “How to pose elegantly in front of the camera” is one of many offered by Institute Sarita, a modern-day version of European finishing schools that caters to Chinese nouveaux riche. Other courses offered by the school, located in the trendy Sanlitun district of Beijing, include how to raise children, proper table manners and luxury brand pronunciation.

“There is a huge demand all along the spectrum,” said Hebbert, whose clients were first primarily drivers of Rolls Royces wanting to dress the part, then evolved to middle-class customers in search of a British-lifestyle experience. “In just a few years, I have seen a real shift in clientele. More and more Chinese are travelling. They see the advantage of having an international edge.” [Source]

John Osburg on the Angst Among China’s Newly Rich