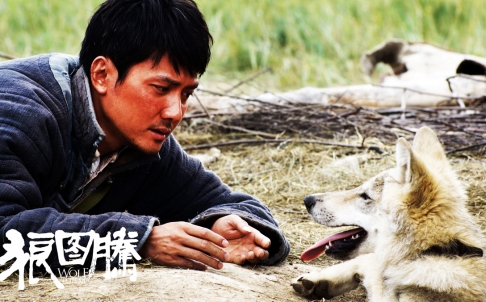 Guo Xuebo, a member of the China Writers Association, said on his microblog last Wednesday that wolves had never been an emblematic animal for Mongolians.

“Wolves have never been the totem of Mongolians, and there’s no record of any wolf totem in Mongolian literature or history,” Guo wrote.

“The wolf is the natural enemy in the lives of Mongolians, and wolves have no team spirit and often fight each other.”

[…] Guo also said that a senior ethnic Mongolian writer complained about the book when it was first published, but “our voices were so weak compared with the interest group formed by Wolf Totem”. [Source]

If the wolf has never been totemic for Mongolians, it at least served such a role for the book’s author Jiang Rong (Lü Jiamin) and his vision of a Chinese social revitalization: as James Leibold wrote at The China Beat in 2010, the book previously sparked indignation among Han nationalists over its portrayal of vitally “wolfish” Mongolian and stagnantly “sheep-like” mainstream Chinese cultures. The site’s many posts on “Wolf Totem” over the years also include a survey of assessments by Jeffrey Wasserstrom, who observed: “One of the trickiest things to unpack about the whole Wolf Totem phenomenon is how it can simultaneously involve a tale so subversive that the author needed to remain anonymous, and yet find the novel being promoted in the official press.”

These contradictions have continued with the unexpected rehabilitation of “Seven Years in Tibet” director Jean-Jacques Annaud. The New York Times’ Amy Qin reports on Annaud’s selection:

“The idea that a story many viewed as critical of the Chinese government would be directed by a foreigner who had previously made a film that criticized China’s policies is rather astonishing,” Rob Cain, who runs Chinafilmbiz.com, a blog about China’s film industry, wrote in an e-mail. But in this case, Mr. Cain said, Mr. Annaud’s directorial experience and technical expertise may have superseded his past actions. “China’s film industry is awash in cash, hungry for success, and eager to partner with people who possess know-how and international access,” Mr. Cain added.

In an interview, Mr. Annaud acknowledged that he, too, was taken aback when representatives of the Beijing Forbidden City production company approached him at his office in Paris. He said the producers told him: “China has changed and we are practical people. We don’t know how to do what you do and we need you.” [Source]