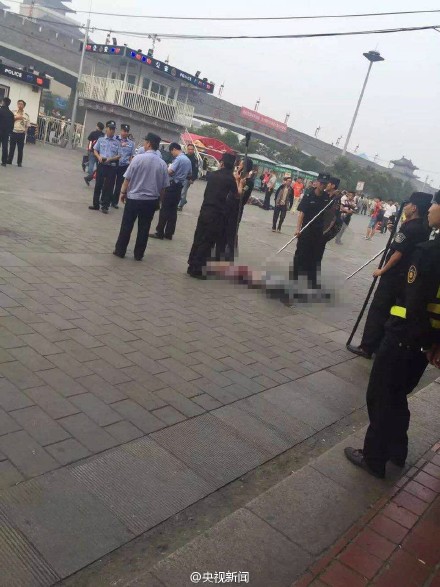 Police in Xi’an, Shaanxi have reported that a Uyghur man died after police shot him for attacking customers with a brick in a railway station ticket line. The AP reports:

Chinese police say they fatally shot a man from the country’s Uighur ethnic group after he tried to attack travelers at a train station with a cement block, reviving memories of recent violence between the ethnic minority and China’s majority Han.

Railway police in the northern city of Xi’an said a police officer repeatedly warned the man before shooting him as he attacked travelers buying tickets at the city’s railway station at about 6 a.m. Wednesday.

A brief message on the force’s microblog said the man died in hospital from his injuries and that normal order had been restored at the station. [Source]

Coverage from the Global Times notes that the Xi’an Railway Police removed their initial Weibo post stating that the alleged attacker was Uyghur.

Tensions between China’s ethnic majority Han and members of the Uyghur minority have been in the spotlight in recent years amid an escalation of deadly incidents blamed by authorities on Uyghur separatists and religious extremists from Xinjiang. While the majority of incidents have occurred in Xinjiang, several attacks have occurred elsewhere in China: In March 2014, dozens were left dead at a Kunming railway station; In May 2015, several were injured by knife-wielding attackers at a Guangzhou railway station.

Authorities responded to the mounting violence by launching a nationwide “war on terror” last May. The campaign was then extended through the end of 2015. Amid the crackdown, regulations of Islamic practices have been enacted in Xinjiang, which some have noted could further marginalize Uyghurs in the region. Ahead of Ramadan this week, it was reported that local authorities were taking measures to discourage the observance of the holy month, as has happened in years past.