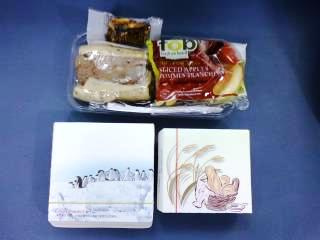 Today is my 29th day camped outside the door to Japan. Breakfast was a hamburger and a cup of purified water.

“There is no free lunch——whatever you sit waiting for, instead of chasing after it, will never come to be.” That was the maxim on the wrapper of the meat bun given to me yesterday by a Taiwanese flight attendant, under an eye-catching penguin design. If I didn’t diligently pursue my right to return home, would so many people be willing to offer me food and support? If we were all talk and no action, if we all sat idly waiting for China to change, then the law and human rights in China would forever be only a fairytale. China’s progress today was brought about by the striving of many, many Chinese people.

At 10:45 a.m. at the press area on the fourth floor, I took an interview with reporters from Asahi Shimbun. There were two people, one of whom was a cameraman. They were the first Japanese news media to conduct a live interview with me. Last time, on November 11, we spoke in a secluded spot, but pictures weren’t allowed. At that time the Japanese officials didn’t want to let the media know about the situation. But the next day, the Asahi Shimbun (evening edition) had a quarter-page report on my situation, accompanied by a photo of me wearing my “injustice” T-shirt. My story then spread quickly in Japan. Today’s interview was 45 minutes long, and they took photos of the food people have given me. They will continue telling my story.

At 12:22 p.m. a call came in from Shanghai. A city resident who had just heard the story of my return home asked, “Are you Feng Zhenghu? Are you still at the Tokyo airport?” I said, “Yes, I’m still here.”

“And you’re Feng Zhenghu himself?” he asked, with a hint of doubt.

“I am indeed Feng Zhenghu.”

“I heard thing about them not letting you come home. I almost don’t believe it. I wanted check if it’s true. Why won’t they let you come home? Which law did they say you’ve broken?”

“They haven’t told me which law I broke. In fact, the law has no provision stipulating that a national cannot return home. If I were in violation of a law, they should let me come home so they can catch me.”

“There’s no reason for them to prevent me from going home. Up until now they’ve only said two things: Mr. Feng, this time you can’t enter the country. This is the decision of senior leadership.”

We talked a bit longer, then ended our conversation. I think that a lot of people in China are much like this fellow. At first they can barely believe my story, but after they understand, they’re shocked.

At 2:00 p.m., a Japan-based American correspondent for NBC News called. He was already at Narita and wondered whether he could come by for an interview. He hadn’t made an appointment, but since I had no plans with other reporters that afternoon, I agreed. The interview and photos took 45 minutes. He asked me, “After you get back home, what is the first thing you’ll do?” I told him, “I’ll go see my mother. In the past, whenever I’m sent home, either from prison or from secret detention, the first thing I do is see my mother.” She’s already over 90 years old and lives in a nursing home.

At 3:00 p.m. we finished with the interview, and I returned “home.” On my “bed” sat a bag of food. Inside were a couple of sandwiches and a few drinks. As soon as I saw it I knew a flight attendant had left it. The drink boxes had Korean on them, so it seems a Korean attendant had joined the ranks of my supporters. I don’t know who it was, but the surveillance camera had recorded the silhouette of this kind-hearted person. My “home” is an absolutely secure area. The immigration inspection hall is under strict guard, with cameras everywhere for 24-hour surveillance.

I received a letter from a retired cadre from the Inner Mongolia Party Committee telling me he had donated 50 RMB (7.3 USD) with no conditions into my domestic bank account. I am extremely grateful for his trust and concern.

Today, Wednesday, is the day petitioners gather in People’s Square in Shanghai to petition the government. Many petitioners made international calls to offer me greetings and support. They told me they all wanted to donate money. I told them, “I appreciate your concern, but you don’t need to send me money. The biggest way you can help me is by telling my story to more people.” The day that the majority of mainland Chinese know my story is the day that I return home.

A Mr. Wang passed on a letter from Jiao Guobiao. Mr. Jiao rightly says, “They can follow their logic and punish me, and I will follow my logic and not comply. In this way, at the very least, I can stop them from doing the same thing to other people. Shanghai officials won’t pull the same move and create a second Feng Zhenghu, and Peking University reactionaries will not use the same routine and create a second Jiao Guobiao. If every Chinese person is as demanding as a ferocious spirit and as solicitous of answers as Qiu Ju, China will be an even better place for humanity to live.”

My problem has yet to be resolved, but it will be difficult to continue blacklisting me in the future. Recently, I heard that the lawyers Guang Ze, Tian Yong, and Zhang Kai have all returned to China safely, and that Mr. Wang Lixiong has also returned home. This made me feel gratified. Their appearance abroad made the Chinese authorities uneasy, but the authorities’ response is showing a bit of enlightenment. They don’t want a second Feng Zhenghu. One is enough trouble for them.

Since seeing news about your war of resistance in the airport, I’ve wanted to call to offer you some encouragement. Seeing the letter that elder sister Luojin sent you triggered me to put this idea into action.

She said that at first she couldn’t understand why you insist on returning home, but I understood it perfectly from the beginning. My country, my parents’ homeland, the land settled and set aside for me by my ancestors, I can want to leave, I can want to not return, but to just not return because they won’t let me? Sorry, I wouldn’t agree to that. I don’t want to empathize with their “intention.” This is the basic mental logic I followed when I came back to China from a half-year fellowship in the U.S., as well as my insistence to date that Peking university leadership give me back my job. They can follow their logic and punish me, and I will follow my logic and not comply. In this way, at the very least, I can stop them from doing the same thing to other people. Shanghai officials won’t pull the same move and create a second Feng Zhenghu, and Peking University reactionaries will not use the same routine and create a second Jiao Guobiao. If every Chinese person is as demanding as a ferocious spirit and as solicitous of answers as Qiu Ju, China will be an even better place for humanity to live.

I’ve heard plenty of stories before of being barred return at the airport. A recent example is Xiao Qiao. I’ve often thought, is there nowhere along this path to stage a protest? It looks like you’ve found it now.  This is a patentable innovation. Every person is a device created by God. Don’t look down on the work you’ve come up with or the actions you’ve taken. They are proof that God is putting you to special use. Your mission is great, and matchless in glory.

I don’t understand how you and your current “kingdom” is positioned under international law. I believe that you are wise enough to find your way to the sunlight. Questions of light must always be resolved quickly. You’re busy with official business, so I won’t occupy any more of your time. May God’s love and mercy stay in your heart, and may God’s grace and comfort be with you! Victory will be yours!