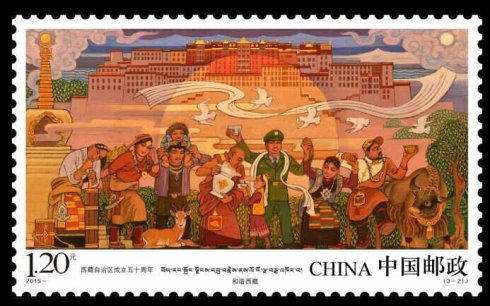 All websites may follow coverage of the 50th anniversary of the founding of the Tibet Autonomous Region. Please take care to tidy up negative and harmful information related to the news. You may close the comments section on major stories. (September 8, 2015) [Chinese]

Dancers and soldiers parading in Lhasa marked the 50th anniversary of the Tibet Autonomous Region, founded on September 1, 1965. Unlike last week’s military parade in Beijing, foreign media were not invited.

Although 142 Tibetans have self-immolated since 2009 to protest China’s rule, Xinhua reports that Tibet is enjoying a “golden era” of happiness and prosperity:

The square in front of the symbolic Potala Palace in Lhasa turned into a sea of color and joy on Tuesday to celebrate 50 years of development.

[…] Jiang Bai, an ethnic Tibetan, Communist Party member and National Model Worker, spoke on the common feeling of pride and joy among his fellow Tibetans.

Tibet’s “golden age” is also touted in a white paper issued by the State Council on Sunday, which claims that the region’s GDP increased 281% from 1965 to 2014. “Old Tibet was a far cry from modern civilization” and was rescued by the Chinese Communist Party, according to the report.

Also this week, China reiterated its claimed authority over the reincarnation of Tibetan religious figures, and insisted that the Dalai Lama-approved Panchen Lama is “growing up healthily and does not wish to be disturbed.” (Gendun Choekyi Nyima went missing at the age of six, making way for Beijing’s chosen candidate.) Meanwhile, Bon Jovi tour dates in Beijing and Shanghai were reportedly canceled because of the band’s use of the Dalai Lama’s image as a concert backdrop in 2010.

CDT translated several interviews with refugees from the 1959 Tibetan uprising, including a former guerrilla trained by the CIA, in the series Troubled Times.