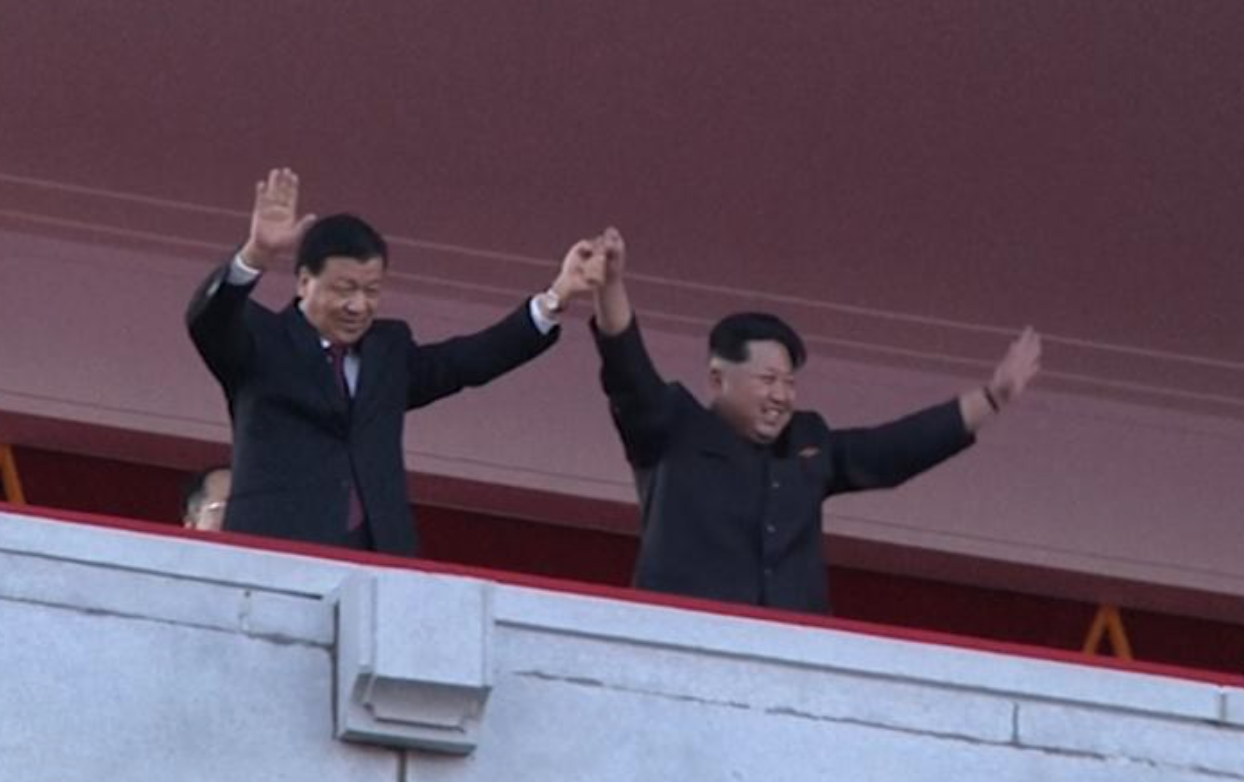 At Reuters, Michelle Nichols reports the continuation of China’s longstanding practice of defending North Korea abroad, as its U.N. delegation discourages Security Council discussion of the latter’s human rights situation which could potentially lead to a referral to the International Criminal Court.

“I heard the suggestion, I believe it’s a bad idea,” said China’s U.N. ambassador, Liu Jieyi. “The security council is not about human rights.”

The U.N. Security Council added human rights in North Korea to its agenda and held its first meeting on the issue in December last year, despite objections by China that led to a rare procedural vote. China is a strong ally of Pyongyang.

When asked if China would push for another procedural vote if a meeting was proposed, Liu said: “We’ll see what happens.” [Source]

In a profile of artist Sun Mu at The Washington Post, Anna Fifield reports that China’s protection extends to the dignity of North Korea’s leaders:

The artist — who once made military propaganda in North Korea — was preparing for his first solo show in Beijing late last year. The paintings satirizing North Korea’s platitudinous slogans — “North Korea is a good place to live” — and showing Kim Jong Il under an upside-down North Korean flag were hung on the gallery walls. The names of North Korean leaders were laid on the floor so that all guests would have to walk over them to enter the exhibition.

Then, on opening day, Chinese police showed up, along with a bunch of North Koreans wearing Kim Il Sung badges. Beijing may not have much love for Kim Jong Un’s regime, but it has even less love for works that mock authoritarian Communist institutions.

The Chinese police shut down the show, confiscated the 70-odd paintings, and burned all but one of the books about the exhibition. [Source]

The paintings, Fifield notes, have since been returned.

China has appeared frustrated with North Korea’s nuclear and missile programs and general unpredictability under Kim Jong Un, while enjoying warming relations with the South. While the West looks to Beijing to rein its neighbor in, many Chinese experts argue that its influence is profoundly overrated, or at least difficult to confidently gauge. Its main priority appears to be fending off any disturbance that might destabilize the regime and unleash chaos on its border.

More recently, there have been signs of a thaw, particularly a trip last month by Politburo Standing Committee member Liu Yunshan, the most senior official to visit Pyongyang since Kim’s succession. John Delury of Seoul’s Yonsei University commented that “what I’m seeing here is Mr. Xi giving up” on taking a hard line. Late last month, China’s ambassador to Seoul assured that “China and North Korea are engaging in more lively political exchanges, and their relations are improving to some extent.” An editorial in the Chinese-language Global Times, translated and introduced by Adam Cathcart at SinoNK, insisted that “in the river of Sino-North Korean friendly relations, problems are washed away in the current”:

Even though these rigorous disagreements might seem irreconcilable, they are far from the whole picture of bilateral ties. On both sides of the Yalu River, there are a few powerful memories [一些强大的记忆] of transcendent power in fighting shoulder to shoulder in times of war. The blood, sweat and tears they shed together against Japan, and then in the early 1950s, have forged a strong connection between both sides. In the construction of socialism, the two countries went through many difficulties and hardships, and this is a thing which cannot separate the two.

The river between the two countries is a common theme in Sino-North Korean friendship; all problems can be bundled here and washed away in the current [各种问题就夹裹在河水中流过]. Problems can settle into sediment, or they can be whipped up into a spray, but this river will be there for the longest time. People have reason to expect that friendship will eternally be the basic appearance of Sino-North Korean relations. [Source]

This friendship has not always been evident on Chinese social media. At Foreign Policy last month, however, David Wertime noted that online mockery of Kim has appeared increasingly suppressed:

[… T]o many Chinese online commenters, North Korea appears to evoke China under late communist strongman Mao Zedong; a totalitarian state, economic backwater, and international pariah that shares a Communist provenance with China but has shamed itself with its inability or unwillingness to follow their country’s reformist blueprint. Unable to speak with such force about Mao, or China’s current leadership, netizens have for years taken delight in tweaking Kim, touching up images of his visage with lipstick and rouge and creating a video showing Kim him in a muddy fistfight with the Japanese prime minister.

[…] A July 2014 analysis by Foreign Policy showed 15.7 million mentions of the term [“fatty Kim the third”] on Baidu, China’s largest search engine, and found plenty of grist as well on the Twitter-like Weibo, a breadth of use that constituted “proof positive of censors’ indifference.” But that all appears to have changed; an October 12 search on Baidu blocks all mentions of the term for failing to cohere with “relevant rules and regulations,” although a search for “little fatty Kim the third” calls up a dead link that promises to lead to 336,081 related images, a vestige of the term’s bygone ubiquity. On Weibo, as of October 12, searches for the term have been blocked, also “in accordance with relevant rules and regulations.” Such language typically indicates that officials have sought censorship.

The drive appears to be part of a government-led effort to rehabilitate North Korea’s tattered image within China. In an October 12 editorial, reliably nationalistic state-run outlet Global Times explicitly called on Chinese web users to end their once-ceaseless bashing of the North in an article titled, “Some Chinese People’s Making Fun of North Korea Does Not Show Self-Respect.” In a feat of understatement, it complained that “some voices have emerged on the Chinese Internet making fun” of the North. But in a line that seemed directed both domestically and internationally, the opinion continued, “We want to say to that portion of Chinese people openly chattering about North Korea are not showing self-respect. And they clearly do not represent the collective sentiments of the Chinese people toward North Korea.” [Source]

In a blog post translated at The Diplomat, Yang Hengjun discussed his own investigation of the online collective sentiment, which revealed a mixture of contempt and concern:

Of course, some netizens were delighted to point out that Kim Jong-un’s Korea is the real successor to the communist ideal. However, when others reminded them that they could go over to North Korea and enjoy this for themselves, they immediately responded: this is absolutely none of my business!

Because of the intimate relation between North Korea’s political system, nation, and individual citizens, North Korea’s future is inseparable from that of the Kim family’s. Hence I posted another blog on Weibo:

Written below is a serious, small-scale investigation; please reply sensibly. You predict that Comrade Kim Jong-un’s future will most likely look like this: […]

The responses after this question were especially intense. The more gruesome options had their supporters, exposing the hostility circulating the web. But there was also a lot of hope for Comrade Kim Jong-un to be genuinely remorseful, thank his citizens for their support to the Kim dynasty, perform kind deeds, become enlightened, start “reform and opening up,” and at a suitable time peacefully release his power.

From the responses of the netizens, whether we hate him or wish him well, we all know that Kim cannot continue down the path that he’s on. […] [Source]