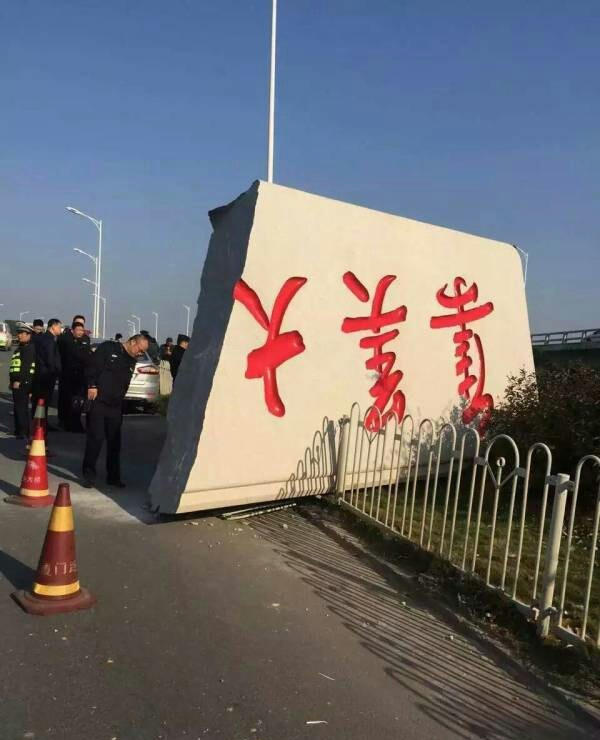 Regarding news of the breaking apart of the stone tablet at Xiamen’s Jimei Bridge, make sure not to republish political rumors. Do not unduly hype the story. (February 29, 2016) [Chinese]

The giant stone tablet, inscribed with the magnified handwriting of former president Jiang Zemin, split in two and tumbled from its pedestal in the early morning. No injuries were reported, but traffic was partially blocked on the six-mile bridge.

Netizens nostalgic for the former leader’s unrefined manners affectionately call Jiang “the toad.” Some have taken the tablet’s breakage as an ill omen: in a deleted Weibo comment captured by FreeWeibo, user Linjieling (@林杰灵) calls it “frightening and inauspicious.” Rumors of Jiang’s death have circulated online in the past, as has speculation that Xi Jinping’s anti-corruption campaign is at odds with Jiang’s inner circle.

Read more about political rumors and the government’s fight against them via CDT.

Updated at 13:00 PST on March 2, 2016: Some netizens have made a tongue-in-cheek interpretation of this incident, echoing the idea of the “mandate of heaven.” During China’s long dynastic period, natural disasters were thought to signal that the current ruler had lost the mandate and should be overthrown. When the tablet fell in Xiamen, the split went through the character da 大, an “omen” of Xi Jinping’s undoing, since Xi’s populist nickname is “Daddy Xi” (Xi Dada 习大大). Jiang Zemin’s signature, in the lower righthand corner of the tablet, remains intact, supposedly indicating that the former president will stay safe. As Weibo user Hongchenkezhan-yuanzui (@红尘客栈-原罪) puts it, “The dedicator remains unharmed, while the character da 大 broke in two.”