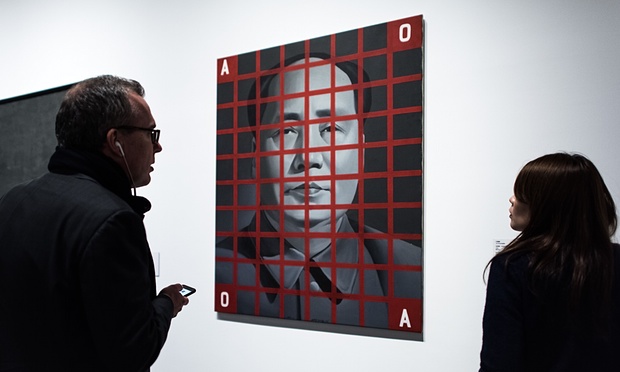 Hong Kong’s M+ art museum, under construction and set to open in 2019 in the West Kowloon Cultural District, could do much to make Hong Kong the art capital of China. In 2013, former Swiss ambassador to China Uli Sigg—the man believed to hold the world’s most comprehensive collection of contemporary Chinese art—agreed to donate a large portion of his collection to the new museum, saying, “My first impulse was to give these artworks to a museum in Beijing or Shanghai.” He  instead decided Hong Kong would be more suitable do to its “long tradition of freedom of expression.” While not yet ready for full public opening, the long-awaited 60,000 square-meter venue this week launched the M+ Sigg Exhibition, consisting of 80 works from Mr. Sigg’s massive collection. The Guardian’s Ilaria Maria Sala reports on the political nature of many pieces on display that would have undoubtedly kept them out of public viewing had Mr. Sigg donated to a museum in the mainland:

Liu Heung Shing’s photos of the Tiananmen square massacre are prominently displayed, as is the provocative video Water, by Zhang Peili – where the newscaster who announced the military occupation of Tiananmen square in 1989 is made to read aloud dictionary entries in her detached, perfect diction.

[…] Chairman Mao’s rounded figure features in several of the 80 works on show, including in irreverent works such as Wang Guangyi’s Mao Zedong: Red Grid No. 2 and Shi Xinning’s Duchamp Retrospective Exhibition in China, where Mao is portrayed staring at Duchamp’s urinal.

Lars Nittve, the former M+ museum art curator, said at the opening: “It is up to Hong Kong to choose how free it wants to be. If there is a message to this exhibition, this has to be it.”

Pi Li, the Chinese art curator at M+ and the main force behind the show, said: “There is no other city in China where this kind of art can be shown. Chinese art is eminently political. From Confucius onwards, the artist has been required to have a public role. And socialist realism, with all its differences, basically stressed this concept even more.” […] [Source]

The museum’s continued construction and the opening of the M+ Sigg show comes amid mounting concerns over Beijing’s increasing political influence on the semi-autonomous region. Economic leveraging is incentivizing self-censorship among the press; Beijing has made efforts to have a say in university governance and has called for “patriotic education” reinforcement; and Beijing’s call for the pre-screening of all candidates in the regional 2017 elections led to three months of mass street protest in 2014. Concern over the lengths central officials were willing to take spiked early this year  when five involved in the publication or sale of salacious books about central leaders disappeared, some of whom are now facing criminal investigation in the mainland. The AFP reports how this growing anxiety has led to both controversy over the M+ museum—itself administered by the Hong Kong government—and also hope that it could represent the reassertion of artistic autonomy:

[…T]he Hong Kong government-sponsored gallery has been criticised for failing to fully represent the local art scene and faces questions over its curatorial independence.

Some in the art community ask why it spent none of its HK1.7 billion ($220 million) acquisition budget on creations that blossomed on Hong Kong’s streets during the pro-democracy Umbrella Movement of 2014.

Others question whether this week’s exhibition — on display at a smaller gallery as M+ awaits completion — has been pared back, pointing out its touring title, “Right is wrong”, has been dropped.

There have been queries over whether some more controversial works were excluded, and whether there was pressure to tone down the narrative of Beijing’s crushing of the 1989 Tiananmen Square protests.

[…Chief curator Doryun Chong] insisted M+ has not been subject to political pressure, but admits the gallery takes a conservative approach to its collection and exhibitions.

[…]But despite concerns, there is still hope that M+ will draw attention to the city’s undernourished creative industries.

“For a long time Hong Kong has perhaps not been the most hospitable city for emerging artists,” said Pearl Lam, who runs a prominent private gallery, pointing to the high cost of living and rental space.

“M+ will be exceptionally important for Hong Kong when it opens.” […] [Source]

In the late 80s — and particularly after Tiananmen — contemporary art took on an increasingly political edge. Artists made art against the system, against a repressive system and political art dominated. This was followed by a more Cynical Realism — or pop art.

Today, Chinese art production has caught up with global trends. Most artists are able to travel and the scene no longer stands in isolation. Its influences are global.

Having watched Chinese art develop closely, I realized that not a single institution, or any known individuals, had begun seriously collecting. Those that did buy pieces did so randomly.

So I decided to do what a national institution ought to do but never did: To collect Chinese contemporary art in a systematic way, from the late 1970s onwards, mirroring Chinese art production in its width and depth from its very beginnings. […] [Source]

For samples from Mr. Sigg’s nearly 1,500 piece collection, see a 2012 Flash Art interview with Sigg. Also see the M+ Sigg Collection promotional website for a statement from the gallery curators, highlights from the collection, and a timeline of contemporary Chinese art.

Translation: A Better World for Our Children