A Lesson on Chastity from the Ministry of Finance 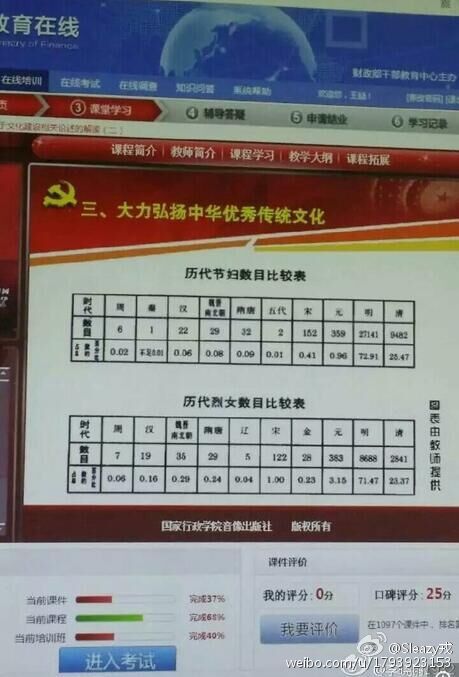 Should the “chaste widows” of late imperial China, who committed suicide to preserve their virtue, be considered paragons of Chinese culture? That seems to be the implication of a screenshot from the Ministy of Finance’s online learning platform, posted to Weibo: The screenshot shows tables on the number of “chaste women” and “widow martyrs” from the Zhou to the Qing dynasties. “Chaste women,” or jiefu (节妇), include women who did not remarry after their husbands died, and those who committed suicide to maintain their virtue. “Widow martyrs,” lienü (烈女), sacrificed themselves to stay chaste or to follow their husbands into the afterlife. The tables appear under a hammer and sickle and the curricular title “Vigorously Develop Outstanding Chinese Traditional Culture.”  Both tables show a surge in recorded suicides during the Ming and Qing dynasties (1368-1912).

It is possible that the lesson plan condemns the misogyny of the imperial era, but netizens commenting on the original Weibo post read into it praise for an oppressive tradition. CDT Chinese collected some of the more pointed responses, which seem to have disappeared from Weibo:

Lianhuanbaodelanmao (@连环爆的懒猫): I can sense the resentment of middle aged men abandoned by their wives.

Shuchuzi (@书橱子): The imperial court wants to bring back the stone arches dedicated to chaste young widows. You want to bind those feet, too?

Dima55 (@蒂玛55): Should unchaste women be tied to stakes and thrown into the river? All those women who choose their partners, those widows who remarry, victims of assault and rape who aren’t willing to kill themselves, give them to me and I’ll drown them. [Chinese]

The figures on the “Ministry of Finance E-Learning Academy” site come from the work of Dong Jiazun (1910-1973), a historical sociologist who focused on Chinese marital customs. Dong’s 1937 work “Statistics on Chaste Widows and Female Martyrs Through History” indicates a surge in “chastity” and “martyrdom” during the Ming Dynasty, with numbers ebbing but still high during the subsequent Qing Dynasty. Canonization of “chaste widows” soared during the Qing, such that by 1845 “the system had become an assembly line,” according to historians Mark Elvin and Susan Mann. Dong’s work is typically cited as evidence of the erosion of women’s freedoms in late imperial China.

It’s unlikely that any Chinese woman aspire to chastity today. Women are more attuned to sexism and more willing to take a stand against it than even a few years before. Still, they face enormous pressure to marry, and single women in their late twenties are often derided as “leftover.” If they do marry, they often do not have title to the homes their husbands buy. Some parents will even give money to their nephew instead of their daughter to buy a home, a practice dating from the Ming.

In the past few years the Chinese Communist Party has been turning to Confucian values as its civilizational inheritance, particularly under Xi Jinping. Mao would not be pleased.