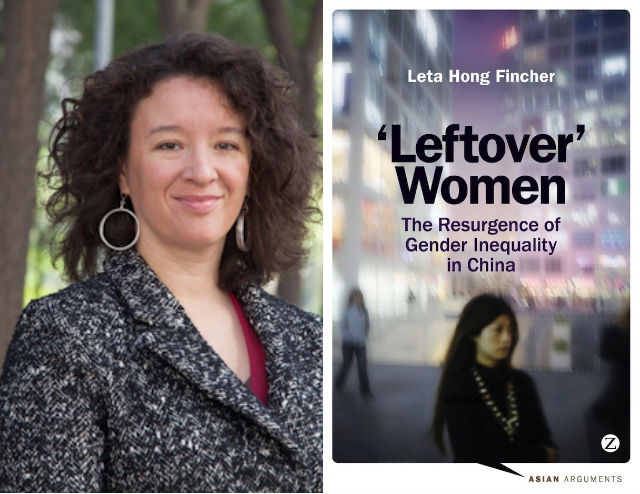 The question of whether authors should accept censorship in exchange for publication within China has been much discussed in recent years. Some, like Ezra Vogel, have argued that it is “better to have 90 percent of the book available here than zero”; others, like Evan Osnos, feel that “altering the proportions of a portrait of China gives a false reflection.” Some of those who do accept cuts, like Peter Hessler and Francis Fukuyama, have posted details of the omissions online for curious Chinese readers to hunt out.

On her blog, Leta Hong Fincher published a set of redactions from her book “Leftover Women: The Resurgence of Gender Inequality in China” on Sunday. As she explained on Twitter, they had been made by the publisher without her approval: “According to my contract with the Chinese publisher, they were supposed to give me the manuscript for 15 days before publication, but they just published it without notice and I didn’t even know what was in it until I read it later.” She told CDT:

I was dismayed to discover that my book came out in the mainland without my having a chance to approve the translated manuscript, since my contract stated that I was supposed to have the final say. Yet in spite of the censorship, I do not regret the publication of my book in the mainland.

Here are some passages from the prologue to my Chinese edition, and this part was not censored:

“I dedicate this Chinese version of my book to the women of China: whether single, married or divorced. May you break free of the shackles of tradition and culture and live a life that is true to yourself.”

“To those Chinese women who are still single and considering marriage, I have two pieces of advice:

1) If you decide you must marry and buy a home, make sure that you register your name on the property deed. Do not forfeit ownership of the most valuable asset you will ever have in your life.

2) Do not marry just for the sake of marrying. There are many paths to happiness in life and you may find the greatest self-fulfillment if you remain a single woman, surrounded by like-minded friends who support you in your aspirations.”

These messages are resonating in China and I am glad to be able to play a role in encouraging women to fight back against intense pressure to marry, and to stand up for their economic rights when they marry and buy a home.

The cuts include several references to the machinery of “a one-party state intent on social engineering, with a massive propaganda apparatus that maintains a tight grip on information.” A single sentence cut from a longer quote on deliberately shunning marriage states that “the government has inserted itself into the tiniest, most minute details of an individual’s life.” Statements that “the political space for women’s rights activism – or any form of rights activism – appeared to have contracted,” or that “the political environment is so repressive,” are missing. A lengthier censored passage highlights the extent of China’s spending on “hard” tools for “maintaining stability,” such as “police, state security, armed civil militia, courts and jails.” Another describes the use of some state organs to control the very people they are supposed to represent:

[…] Literary critic Lydia H. Liu writes that the Women’s Federation functioned “in reality very much like other hegemonic apparatuses used by the Party,” while historian Tani Barlow says the Women’s Federation used its power to “subordinate and dominate inscriptions of womanhood.” In fact, the peculiarity of a Women’s Federation that contributes to bolstering male supremacy is matched only by the ways that the country’s official Labor Federation often serves more to control than to empower workers. [Source]

Also excised is a reference to a media directive published in 2011 by CDT on cheerleading regulation of the real estate market.

While defending the Party’s current role in protecting women’s rights, the censors also removed two historical references that undermine its exclusive claim to have swept away feudal prejudice and liberated China’s women. (Italicized text was not cut, but is included for context.)

In today’s China, when some parents prefer to give money to their nephew rather than to their own daughter to buy a home, they are reverting back to the practice from the Ming dynasty, when, in the absence of sons, daughters had less of a claim to property than nephews. (See Chapter 3 for more on parents favoring sons and sometimes nephews over daughters in buying property.) […] [Source]

[…] In 1907, [anarcho-feminist He-Yin Zhen] inaugurated the feminist journal Natural Justice (Tianyi bao), which she edited in Tokyo with her husband, Liu Shipei. The authors point out that the earliest Chinese translation of the first chapter of Marx’s The Communist Manifesto was published in Natural Justice. Therefore, rather than the Communists bringing feminism to China, as is the narrative in official Party history, feminism first introduced Communist ideas to China through Japan, observe Liu, Karl and Ko. [Source]

Mentions of some challenges to the Party’s authority were also deleted. Artist Ai Weiwei’s name was cut from a description of online campaigning inspired by activist Ye Haiyan, for example. Also censored is an account of the chilling effect that the demolition of the New Citizens’ Movement—“a coalition of academics, lawyers, and liberals calling on Chinese officials to disclose their assets and curb corruption”—had on activists like Li Tingting (aka Li Maizi)—one of the “Feminist Five” whose bail conditions were recently lifted after a month-long detention last spring.

By far the lengthiest redaction is a multi-page interview with Zeng Jinyan, an activist, writer, and filmmaker. Zeng’s estranged husband is fellow activist Hu Jia. She tells Hong Fincher about the emotional and financial burdens of living and raising a child under house arrest, travel restrictions, and constant monitoring. “Control is tightening on the whole of civil society,” she says, “so I don’t think there’s any possibility of a real women’s movement in mainland China.” The deleted passage concludes with Hong Fincher’s observation that:

The voices of women are obscured in many contemporary depictions of China, not just in media reports about rights activism. Zeng Jinyan’s experience as a persecuted dissident and single mother is obviously not representative of all women. Yet in some ways her heavy domestic burdens are common to wives and mothers throughout China, who work hard to support the household but whose contributions are invisible and unrecognized. [Source]

Read more on women’s rights in China and Leta Hong Fincher’s work, including a 2014 interview on “Leftover Women,” via CDT.