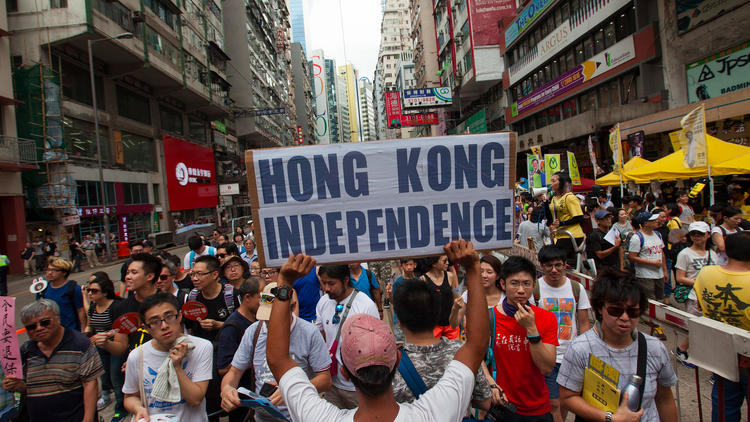 Last week, ahead of the opening of nominations for Hong Kong’s Legislative Council, the government of the semi-autonomous city asked all candidates running in the upcoming September 4 elections to pledge that the territory is an “inalienable part of China” or face possible criminal penalties. The New York Times’ Austin Ramzy reports on the announcement, and its potential to exacerbate long-running tensions in the region:

Some scholars and lawmakers said the announcement, made days before nominations open for a legislative election in September, could harm political freedoms guaranteed under Hong Kong law.

[…] In recent years, supporters of independence or greater autonomy from China have grown increasingly vocal. Some candidates in the September elections have expressed support for those ideals or at least for allowing the public to vote on the future status of Hong Kong.

[…] Legislative Council members have previously had to pledge allegiance to Hong Kong and swear they will uphold the Basic Law, which serves as a constitution regulating the territory and outlining its relations with China’s central government. Under the requirements announced on Thursday, candidates will have to sign such an oath in order to run.

“We take the view that advocating and promoting ‘independence of Hong Kong’ is contrary to the content of the declaration that the law requires a candidate to make,” the government said in a written statement. Requiring the declaration before the vote was driven by “uncertainties to the solemn Legislative Council election and confusion to electors,” it said.

The Election Affairs Commission said in a separate statement that anyone “making a false declaration in the nomination form is liable to criminal sanction.” […] [Source]

At the Los Angeles Times, Violet Law reports on responses to the announcement from politicians and potential candidates:

Before, potential candidates only needed to sign a declaration to uphold the constitution and pledge allegiance to Hong Kong. Although Article One of the Basic Law states that Hong Kong is an inalienable part of China, “there’s no legal basis for the new requirement,” said Albert Ho, a legislator from the Democratic Party who plans to run for reelection.

Ho’s party will meet with the head of electoral affairs commission to question the requirement.

[…] Edward Leung, a popular pro-independence candidate, filed Saturday to run for legislature in the Sept. 4 elections and refused to sign the new pledge. Leung said he was told the justice department will have the final say on his candidacy.

“I’m going to see on what grounds the government can bar me from running,” Leung said in a campaign video posted on his Facebook page. “I call on everybody to join me in bringing pressure to bear.”

Demosisto, the new political party by young activist Joshua Wong and others in the wake of the failed pro-democracy Umbrella Movement, may mount a legal challenge to the pledge. But another bureaucratic roadblock seemed to have dampened its electoral ambitions. [Source]

The Hong Kong Free Press’ Kris Cheng reports on the potential penalties for any candidate who breaks the pledge, and quotes a government spokesperson on the move:

Anyone making a false declaration on the nomination form is liable to criminal sanction. The maximum penalty, according to the Elections (Corrupt and Illegal Conduct) Ordinance, is a fine of HK$100,000 and three years of imprisonment, and offenders cannot be elected as district councillors and lawmakers for five years.

[…] The move came after announcements from several independence advocates that they will join the election in September, ahead of the start of the nomination period on Saturday. According to a preliminary poll by the University of Hong Kong’s public opinion programme, two candidates from the camp may win in the election.

A spokesperson for the government said “we take the view that advocating and promoting the ‘independence of Hong Kong’ is contrary to the content of the declaration that the law requires a candidate to make, namely… rendering it questionable as to whether the concerned candidate is capable of being validly nominated, causing uncertainties to the solemn Legislative Council election and confusion to electors.”

The government agreed that there was a need for the Electoral Affairs Commission to take certain corresponding measures in the electoral process, added the spokesperson. [Source]

Political tensions in Hong Kong have been on display in recent years, as many worry about the deterioration of press freedom and regional democracy. In 2014, massive pro-democracy protests swept the city after Beijing published a white paper reasserting Party authority over the region, and proposed electoral reforms requiring all candidates for Hong Kong chief executive be approved by a pro-Beijing panel. The Legislative Council last year overwhelmingly voted against the reform. Tensions were exacerbated recently after several Hong Kong booksellers known for publishing salacious titles on Party leaders disappeared to emerge in detention in China. Meanwhile, pro-establishment and pan-democratic Legislative Council candidates are running an “Anyone But CY Leung” campaign against the current and widely unpopular Beijing-backed incumbent chief executive.