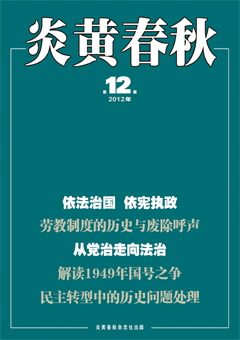 Two weeks ago, the government-sponsored supervising organization of the long-running liberal journal Yanhuang Chunqiu swept in to replace key senior staff in alleged violation of a 2014 agreement guaranteeing the publication’s independence. A leaked media directive warned websites not to report or comment on the reshuffle. Defiant editors fought back with a lawsuit and a vow to close the journal if they could not win back control. Their lawsuit was rejected by a Beijing court last Friday, but as The New York Times’ Chris Buckley writes, this setback has not ended the resistance:

Editors resisting the changes said the upheaval reflected the party’s intensifying offensive against unorthodox ideas. Yet they have chosen open resistance, using a lawsuit, a standoff at the magazine’s offices, and gestures of support from academics, writers and some senior retired officials.

[…] They have refused to hand over keys to many rooms in the magazine’s offices, and they have also kept hold of financial records and the official chop, needed to stamp documents, [executive editor Wu Wei] said.

[…] The rift over the magazine’s future has also become a physical standoff, with separate parts of its premises, behind a small hotel in western Beijing, held by the two rival groups. On Tuesday, the distribution office was still run by staff members loyal to the longtime editors, while nearby, an editor’s office and meeting room were held by people apparently loyal to the academy that has tried to impose control over the magazine. So far, the police have not moved against the protesting editors.

[…] “This is a magazine that speaks the truth,” Mr. Hu [Dehua], the deputy publisher, told several reporters outside the Yanhuang Chunqiu offices, while guards recorded videos on their smartphones. “There’s an old Chinese saying that even a rabbit will bite when it’s riled.” [Source]

The tightening ideological climate under Xi Jinping has been widely blamed for the journal’s current difficulties. On the other hand, a number of its staff and supporters have appealed to Xi’s emphasis on rule of law and suggested that the pressure is coming from somewhere below Xi himself. Xi—whose revolutionary father famously described Yanhuang Chunqiu as “not bad”—has been credited with intervening in its favor last year. Some of the comments may be intended to invite another “presidential pardon.” Philip Wen’s report for the Sydney Morning Herald provides further examples of the two clashing narratives:

[… Hu] said the move against the magazine was too “crude” to have been endorsed by the most senior levels of Communist Party leadership.

“President Xi has consistently emphasised the rule of law, you have to do everything by the law,” Mr Hu said. “This is a clear violation of a contract – if the court does not accept our case, it is a dereliction of duty.”

[…] Monash University historian Warren Sun says Yanhuang Chunqiu’s fate was virtually sealed with the introduction of the so-called Document No. 9, which warned against growing Western influences including freedom of the press and “historical nihilism”. [See more on Document 9 at CDT]

“Apparently Xi’s tightening control of voices is not just confined to the present, but even extended to silence the past,” Dr Sun told Fairfax Media. “Despite its liberal stand, the journal was able to survive and thrive under [Chinese presidents] Jiang Zemin and Hu Jintao for more than two decades.

“The likely closure of arguably the last truth-speaking platform only attests to the sad fact that ideological controls under Xi have produced the most depressing political climate in post-Mao China.” [Source]

South China Morning Post’s Choi Chi-yuk, meanwhile, presents an illustrative example of Yanhuang Chunqiu’s past defiance. On Wednesday, CDT translated a 1989 notice from China’s General Administration of Press and Publication (since merged into the State Administration of Press, Publication, Radio, Film and Television) which advised publishers on handling materials related to the recently deposed leader Zhao Ziyang. Zhao was removed from power for his sympathetic stance toward the Tiananmen protests, and spent the rest of his life in prison. The five-point GAPP notice, which has circulated on WeChat following the release in Hong Kong of a new collection of Zhao’s speeches and writings, includes restrictions on reproducing Zhao’s talks and essays, calls for the destruction of biographies and removal of photographs, and instructions on phasing him out of school textbooks.

Xu said that in 1993, Yanhuang Chunqiu published a number of photographs of Hu Yaobang, whose death in 1989 prompted the student protests, to accompany a memorial poem. It sparked an outcry, and the magazine was ordered to discard all copies not yet sold.

Two year later, on the 80th anniversary of Hu’s birth, Xu paid several visits to Dai Huang, a former reporter with the official Xinhua News Agency who had written a book commemorating Hu, before securing the rights to publish a series of articles paying tribute to Hu – whose name was, from then on, no longer taboo for mainland media.

“It was a bit risky at that time, but it was worth it to portray Hu was a man who had made a huge contribution to history,” Xu said. “An idea came to mind that there were two things we should do with our journal. Aside from Hu, we should also desensitise Zhao Ziyang’s name in publications.”

When the official Central Literature Publishing House printed a biography of Communist Party patriarch Chen Yun in 2006, Yanhuang Chunqiu acquired its permission to republish part of the book that mentioned Zhao.

A year later, Du invited former vice-premier Tian Jiyun, Zhao’s deputy when Zhao was premier between 1983 and 1987, to write article in commemoration of his former boss. The series of articles published by Yanhuang Chunqiu effectively desensitised Zhao’s name. [Source]