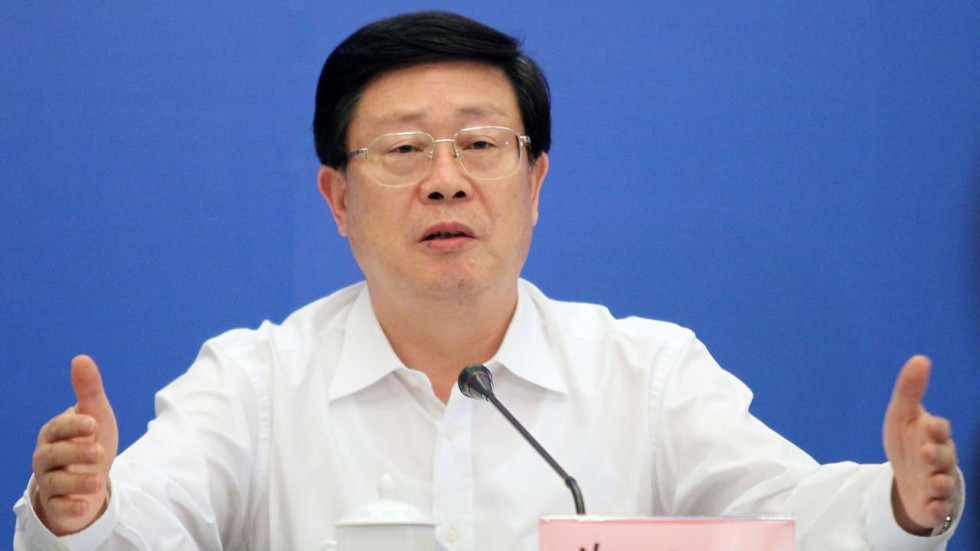 On Monday, state media announced the investigation of Huang Xingguo, the mayor and acting Party chief of Tianjin, for “serious disciplinary violations.” On one hand, the news signals the continued momentum of Xi’s signature anti-corruption drive; on the other, it follows the start of a politically charged shuffling of province-level roles ahead of next year’s national leadership transition. On Tuesday, Hubei Party secretary Li Hongzhong was named as Huang’s successor, making him a likely Politburo contender next year. In the interim, though, the unexpected vacancy prompted intense speculation. From The New York Times’ Chris Buckley:

The Communist Party leadership is entering a delicate period in its political calendar: the buildup to a congress, most likely late next year, which will replace retiring central leaders with new ones who will work under Mr. Xi in his second term of five years.

The party’s Central Committee — a council with about 200 senior officials as voting members — will hold its annual meeting next month, and precedent suggests that the meeting will formally set in motion preparations for the congress. Jockeying for promotions, and rumors about others’ downfall, are likely to intensify in the coming year.

[…] Before his downfall, Mr. Huang appeared as eager as any official to show his loyalty to Mr. Xi. This year, he was among dozens of local leaders who pledged their fealty to Mr. Xi as a “core” leader, a term suggesting special stature.

From Ting Shi at Bloomberg:

The move could have broader implications since past leaders of Tianjin – less than an hour’s train ride from Beijing and one of four centrally administered municipalities – have held seats on the party’s elite 25-member Politburo. The post was already among the most closely watched as President Xi Jinping reassigns provincial posts ahead the party congress in 2017.

As many as 11 members of the Politburo – including five of the seven on its supreme Standing Committee – are expected to retire at the twice-a-decade congress. A party plenary session in Beijing next month is expected to help lay the groundwork for that event.

“Tianjin is an important battle ground and the position of its party chief is directly decided by the central leadership,” said Qiao Mu, a professor at Beijing Foreign Studies University and a political commentator. Huang’s case pointed to jostling going on before the party congress, Qiao said. [Source]

Before falling under suspicion, Huang was seen as a contender for the party’s 25-member Politburo at next year’s party congress.

Political pundits said cadres would be eyeing the Tianjin ­vacancy as a stepping stone to the Politburo.

“The political network in Tianjin is extremely complex and close-knit. If one major official falls, it’s likely others will follow ,” Beijing-based political analyst Zhang Lifan said.

[…] Chen Daoyin, an associate professor at Shanghai University of Political Science, said the party might assign Politburo members to serve as Tianjin’s party chief on a temporary basis to maintain stability, or ask a rising-star provincial governor to fill the position.

“This will pave the way for these rising stars to enter the Politburo at the party congress next year,” Chen said. [Source]

There was some speculation that current Politburo member and recently replaced Xinjiang Party secretary Zhang Chunxian would inherit the post, despite rumors after last month’s round of reappointments that he would move on to Party discipline work or was “on his way out” via a “semi-retired” role. China Daily reported that the departing Zhang had “thanked the people of Xinjiang for accepting him as their son,” but The Economist, surveying his time there, commented that Zhang “will not be missed by its ethnic Uighurs.”

The Economist also noted Zhang’s “unusually relaxed manner with journalists,” while China Daily referred to “his friendly approach with the media.” On Twitter, though, the AFP’s Tom Hancock recalled Zhang’s rebuke at a 2012 press conference that “your understanding of China, like your Chinese, is half baked.”

Zhang was replaced in Xinjiang by Chen Quanguo, former Party chief of the Tibetan Autonomous Region, and another of the rising stars tipped for succession to the next Politburo. Chen’s own replacement, Shandong native and Tibet veteran Wu Yingjie, marked his promotion by calling on the local government to “deepen its exposure and criticism of the Dalai Lama.” Another recent reappointment is that of Li Xiaopeng, son of former premier and Tiananmen crackdown architect Li Peng, as transport minister.

Amid persistent speculation that Xi Jinping may be planning to bend or overturn post-Mao succession conventions, South China Morning Post’s Minnie Chan reports a suggestion that discontent with the system is growing elsewhere within the Party:

Citing the example of the downfall of the so-called “New Gang of Four” in 2014, a year after President Xi Jinping secured full power, Ding [Xueliang, a Chinese politics professor at the Hong Kong University of Science and Technology] said the party was facing “a critical challenge of the most critical issues” similar to the crisis in the aftermath of Lin [Biao]’s attempted defection 45 years ago.

“The so-called coup of the New Gang of Four indicated more and more cadres in the party do not want to be arranged under the outdated successor system, pushing the leadership to come up with another new power-transfer model that’s different from Mao and Deng’s,” Ding said.

[…] “The lack of a powerful leader like Deng will increase challenges and difficulties for the creation of a new model,” Ding said. “The new model needs to balance interests among different political groups and influential families, which is likely to be a mixture learning from Chinese modern history and the former Soviet Union’s transfer to today’s Russia.” [Source]