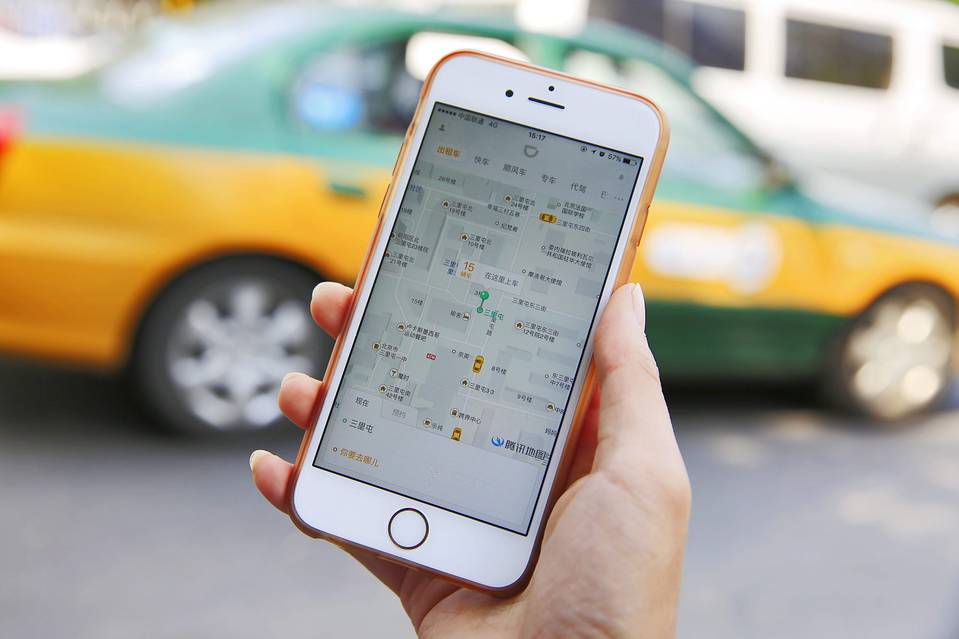 In July, central authorities gave the green light to Uber-like online ride-sharing services as several central government ministries agreed on new laws  formally allowing Chinese residents to digitally hail rides from privately-owned cars. The laws were laxer than anticipated, and came as homegrown Didi Chuxing and international ride-sharing giant Uber Technologies were in the midst of a heated and costly battle to dominate the industry. Didi emerged victorious, acquiring Uber’s China branch and investing heavily in Uber Global just after the central July regulations were announced. It seemed that the well-connected Didi had won the fight against its main competitor, and was gearing up to reap the spoils. Then, last week, several major economic hubs proposed municipal regulations which could strip the company of much of its local workforce. At The Wall Street Journal, Eva Dou reports:

Several major cities issued proposed industry regulations in recent days that would restrict the types of vehicles that can be used and who can drive them, potentially crimping a large chunk of Didi Chuxing Technology Co.’s business. Meanwhile, the country’s antitrust regulators continued to investigate Didi’s deal to acquire U.S.-based Uber’s China unit.

Didi issued a strongly worded protest over the weekend against the draft regulations from Beijing, Shanghai, Shenzhen and at least three other major cities. The company said the rules, if adopted in their current form, would force “the vast majority” of its drivers and cars off the road.

[…] Didi’s open criticism of the government’s plans marked a rare departure from common practice for a Chinese company. Didi has previously said it welcomed regulation of the evolving ride-hailing sector, and the company, one of China’s hottest startups with a valuation of more than $33 billion, had been enjoying smooth going in recent months.

[…] The draft rules from Beijing, Shanghai and Shenzhen would limit drivers to those with local residency permits, and require cars to meet size restrictions and have Global Positioning System and emergency alert devices installed. Some cities plan to require ride-hailing vehicles to have a minimum wheelbase, which would rule out some small compact cars. [Source]

China’s local residency system, also known as the hukou or household registration system, has long been a source of controversy for limiting migrant workers’ access to essential public services in the cities in which they toil, and for encouraging them to leave children in their rural hometowns. Migrant workers, according to Didi, make up the lion’s share of its drivers in urban areas, and the draft rules would essentially prevent them from working while also negatively impacting China’s emerging ride-sharing economy. At Bloomberg, Lulu Yilun Chen reports:

Less than 3 percent of 410,000 drivers on Didi’s platform in Shanghai have local hukou, the company said on Saturday. Plans for tighter vehicle standards — including specifying a minimum wheelbase width — would rule out more than 80 percent of the service’s cars in the city, Didi said.

“These proposals would likely mean a sharp drop in market supply of ride-sharing vehicles, a significant decrease in the number of drivers and a steep rise in costs,” Didi said in a statement. “We call for local authorities to create a more enabling and friendly environment for new technology developments in the sharing economy.”

The cities asked for feedback on the planned rules in coming weeks. [Source]

Didi also warned that the new rules would negatively impact urban efficiency. For more on the public consultation process, read a CDT interview with George Washington University’s Steven Balla, who warned that it can “provide a veneer of popular legitimacy to decisions that government officials have already made behind closed doors.”

An essay from the 文史砍柴 public WeChat account narrowed in on proposed municipal regulations in Beijing, focusing on how they disadvantage migrant workers and work against efforts to open the capital city to the world. CDT has translated an excerpt below:

I’m aware, if ride-sharing cars must have a Beijing hukou and a Beijing license plate, this harms not only those countless non-Beijing resident drivers, but also businesses whose valuation exceeds hundreds of billions, and whose bosses follow state leaders to visit foreign countries to prove that China is fertile environment for entrepreneurs. It also harms long term residents in Beijing—regardless of whether they have a Beijing hukou or not. We were just recently rejoicing our farewell to the chaos and confusion of Beijing taxis, to the arrogant temperament of the Beijing cab drivers, but soon we’ll be forced to endure further hardship. One possible forecast is that traditional taxi companies will gradually be phased out. When this provision is implemented, many non-Beijing ride-share drivers will evacuate, and those drivers with a Beijing hukou will fill the vacancy, becoming ride-share drivers. Then a similar situation to the monopoly of taxi companies will arise in Beijing, with passengers forced to endure high-cost, low-quality service.

Why was Beijing taxi service so bad in the past? One major reason is that cab drivers were registered in Beijing, so some urbanites grew up to be Beijing drivers. They wouldn’t bathe for a few days and their cars would stink, yet they would treat their customers like subordinates, deny service when the distance is short or the fare low shorten the distance, or be foul-mouthed and grimace at customers. In the next stage, drivers’ income saw a steep decline. Many drivers from Ping’gu, Miyun and other suburbs entered the business. In any case, the Beijing taxi business was closed to anyone without a Beijing hukou. One time I couldn’t stand the attitude of one forceful driver, so I said to him: If Beijing looked to Shenzhen and Guangzhou and allowed outsiders to drive taxis, the hard-working drivers from Hunan and Henan would come in and smash your livelihoods.

Can you guess how this Beijing uncle replied? “Outsiders can return to their home regions if they can’t make a living. Where can we go? If you really allowed outsiders to scramble for our fares, we’d all be protesting in the public square.”  His words exposed a confidence that can only be found in the Imperial City.

Really, I didn’t expect this—it’s already 2016, how long has China been in the WTO? Beijing and Shanghai, our two biggest cities, are preparing to launch these types of rules, galloping speedily away from their openness.

A person without a Beijing hukou can buy a mansion in Beijing, can become the CEO of a Beijing listed company, can be the chief editor of a Beijing media company or an expert professor at a university. But, no matter their qualifications, they can’t be a Didi driver.  [Chinese]

Other commentators have drawn lessons from the case about the process of local policy-making in China. At The Wall Street Journal, Li Yuan uses the standoff between municipal regulators and Didi Chuxing to illustrate how China’s complex regulatory system can lead to tension between local and central authorities—and has done so since the early days of the PRC:

“China’s central government is definitely more powerful than the U.S. federal government but not as powerful as many imagined,” said Dong Jielin, an adjunct professor at the Research Center for Technological Innovation at Tsinghua University in Beijing. “The central and local governments have always been contending for power.”

The Beijing, Shanghai, and Shenzhen rules don’t directly contradict those rules, but set other restrictions that Didi said are onerous. They would limit drivers to those with local residency permits, and require cars to meet size restrictions and have Global Positioning System and emergency alert devices installed. [Source]

Psychologist and popular science writer Tang Yinghong also addresses the new rules in a WeChat post. He suggests that the Didi regulations are symptomatic of a widespread lack of and scorn for specialized expertise among Chinese bureaucrats, which leaves them oblivious to many consequences of their policies. As other examples, he cites China’s long-running family planning policies, and Transport Ministry rules on road cargo dimensions that inadvertently outlawed standard shipping containers. If unchecked, he argues, this tendency could steadily erode Chinese society, even leading to its collapse. CDT has translated an excerpt:

[…] In terms of its intentions, [the new regulations] seem quite reasonable; but in terms of their effects, this sort of superficial approach not only struggles to live up to those intentions, but can bring about unpredictable social consequences.

Limiting migrants’ employment opportunities could of course cause some to lose their footing in tier one cities, and return home. This will undoubtedly increase employment pressure in their hometowns. Moreover, migrants who have left their hometowns to seek advancement in tier one cities will be unable to find such opportunities back home. If their lawful employment opportunities are restricted, those who are unwilling to return may turn to illegal employment to support their families, bringing about a chain of negative effects on cities’ public order and governance. Another aspect: because many so-called “low-end” migrant workers often do dirty, tiring, or low-paying jobs that locals aren’t willing to do, once they’re “lawfully” squeezed out, the inevitable result will be inconvenience for those locals, and even lower life efficiency.

Pushing migrants back to their hometowns, whether by restricting employment opportunities or not, could gradually enlarge developmental disparities between regions, make migrants who had been legally employed helpless to avoid “illegal” work, or raise locals’ living costs while lowering their life efficiency. These are all negative effects that public policymakers should try to avoid. Especially in the context of a general weakening of economic development, any policy which reduces employment opportunities, even those of “low end” migrants, will be kicking the economy while it’s down, from a specialist’s perspective. And that’s to say nothing of this policy’s psychological cost: if the masses are seriously psychologically affected, then the pent-up anger of harmed groups could come boiling out at any opportunity.

The complexity of modern society has passed the level that bureaucratic elites and relevant organs are able to understand. The factors involved in complex public policy spheres like population management and control and economic adjustment are extremely complexly multidimensional and intricately intertwined, and any careless policy measures could trigger unpredictable social consequences. If policies are drafted, formulated, and issued based on the narrow understanding of a few bureaucratic elites in relevant departments, cut off from outside influence, they will often step into a quagmire without realising it. [Chinese]