Statement of the Week: China’s Internet is Open 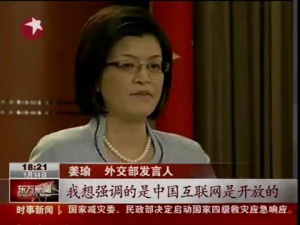 The Chinese government’s official position on the degree of internet freedom within its borders, famously stated at a January 14, 2010 press conference by Foreign Ministry spokesperson Jiang Yu:

Q: Google announced that it might withdraw from the Chinese market and no longer cooperate with the Chinese Government on internet censorship. What’s China’s response to that?

A: I want to stress that China’s internet is open. The Chinese government encourages the development of the internet and endeavors to create a sound environment for the healthy development of internet. Chinese law prohibits any form of hacking activities. As in other countries, China manages the internet in accordance with law. The measures we take are consistent with international practice. I also want to stress that China welcomes international internet corporations to do business in China in accordance with law.

A: I do not understand the situation to which you are referring. What I can tell you is that the Chinese government manages the internet in accordance with the law. It has clearly written rules about which information should be prohibited from being spread on the internet. I suggest that you ask CNNIC for information about this issue.

Jiang’s was not the earliest mention of China’s “open internet,” nor was it the last. In 2009, Xinhua official Zhou Xisheng went so far as to say that “China has the most open internet in the world.” In 2010, Foreign Ministry spokesperson Ma Zhaoxu threw the same retort at U.S. Secretary of State Hillary Clinton’s Remarks on Internet Freedom.

Ahead of China’s first World Internet Conference in 2014, then head of the Cyberspace Administration of China Lu Wei exercised similar disingenuousness responding to a reporter’s question about why certain foreign social media sites had been shut down in China: “I have never used any of these websites so I don’t know if they have been shut down. […] We have never shut down any foreign sites. Your website is on your home soil. How can I go over to your home and shut it down?” A year later, ahead of China’s second World Internet Conference, Cyberspace Minister Lu claimed at a press conference that China doesn’t censor online content, but rather regulates it: “If we really censor the internet, how come our internet user population and their reliance on the internet keep growing?” His comment led to a storm of criticism online, which was quickly regulated.

In March of 2015, the spokesperson for Beijing’s 2022 Winter Olympic bid has assured the public that foreigners would have unfettered internet access during the event, noting that while China remains committed to an open internet, Chinese citizens have no need for services like Facebook and Twitter.