With no exception, the headline “Local Meteorological Bureaus Nationwide are Requested to Halt Smog Forecasting and Warning Work,” must be modified. Related content is not to be hyped. (January 17, 2017) [Chinese]

The above central directive comes after the following photo was leaked and shared widely online: 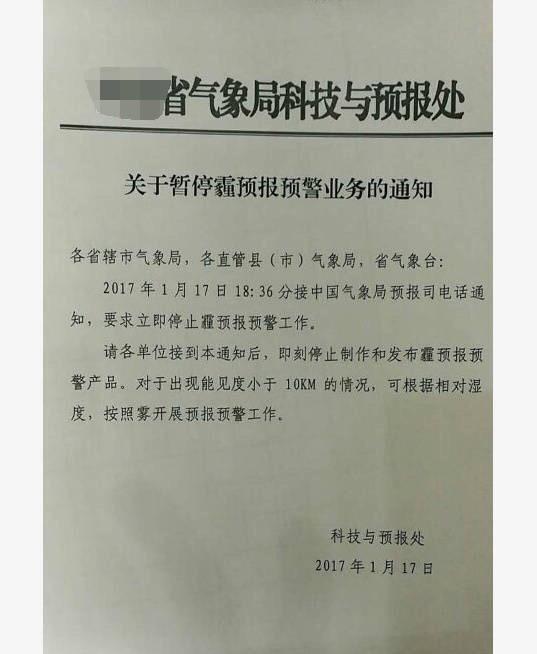 On January 17, 2017 at 18:36 received a telephone notification from the China Meteorological Administration requesting the immediate cessation of smog forecasting and warning work. All work units are kindly requested to immediately stop making and distributing smog forecasts and warning material. In circumstances where visibility is less than 10 km on the basis of relative humidity, carry out forecasting and early warning work in accordance with fog procedures.

Following the leak, many Chinese news websites reported on the notice in the context of ongoing air pollution crises in many Chinese regions, inspiring the above central directive. While the information had already been circulated widely, the directive requests all websites to amend the original title, removing suggestions that the leaked instructions were meant to be applied nationwide.

The government said a single department will now be responsible for issuing smog alerts to avoid mismatches between the different authorities. A representative from the China Meteorological Administration told government-backed online publication “The Paper” that “meteorological bureaus and the environmental protection administration often disagree when they issue smog-related information.”

“A joint alerting mechanism will be formulated to consult how to and who should issue alerts for smog,” the representative added.

Chinese officials use a color-coded system to issue smog alerts, topping out at red when severe pollution warnings are likely to last more than 72 hours.  The mechanism warns firms, schools and individuals of incoming smog and sets off a series of emergency measures, such has ordering cars off the road and closing highly polluting factories. [Source]

The leak and subsequent directive to amend headlines in existing coverage comes three years after central Chinese authorities declared “war on pollution” in response to mounting public anger over toxic air pollution. Despite significant policy moves to address the domestic situation, and diplomatic indications of China’s willingness to assume a leadership role in global efforts to combat climate change, this year’s smog season has been a severe one so far.

Last month, as Beijing was in the middle of a five-day “red alert” for air pollution, municipal authorities revealed plans to include smog on a list of “meteorological disasters,” much to the chagrin of experts who saw in the plan potential to give polluters a free ride. A subsequent propaganda directive ordered media outlets to refrain from commenting on the plan.

The intensity of urban air pollution this winter may have inspired recent changes to the National Energy Administration’s newest five-year plan: an announcement in November showed goals to substantially increase coal power capacity by 2020 and decrease goals for alternative energy development; More recently the administration announced over $360 billion in planned investments into renewable energy. At The New York Times, Michael Forsythe reports that the construction of over 100 planned coal-fired power plants have been cancelled:

The announcement, made by China’s National Energy Administration, cancels 103 projects that were planned or under construction, eliminating 120 gigawatts of future coal-fired capacity. That includes dozens of projects in 13 provinces, mostly in China’s coal-rich north and west, on which construction had already begun. Those projects alone would have had a combined output of 54 gigawatts, more than the entire coal-fired capacity of Germany, according to figures compiled by Greenpeace.

The cancellations make it likelier that China will meet its goal of limiting its total coal-fired power generation capacity to 1,100 gigawatts by 2020. That huge figure, three times the total coal-fired capacity in the United States, is far more than China needs. Its coal plants now run at about half of capacity, and new sources of power, like wind, solar and nuclear, are coming online at a fast clip.

Nevertheless, China’s capacity would have surged well past the 1,100-gigawatt mark by 2020 had it not begun canceling coal-fired plants in the works. The new announcements are in addition to cancellations detailed last year. [Source]

The projects worth some 430 billion yuan ($62 billion) were to have been spread across provinces and autonomous regions including Xinjiang, Inner Mongolia, Shanxi, Gansu, Ningxia, Qinghai, Shaanxi and other northwestern areas.

[…] “Stopping under-construction projects seems wasteful and costly, but spending money and resources to finish these completely unneeded plants would be even more wasteful,” said Greenpeace in a statement. [Source]