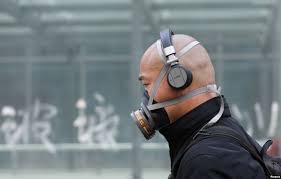 Despite the official launch of a “war on pollution” three years ago, cities in China have this winter been experiencing a very severe smog season. A massive air pollution crisis in Chengdu, Sichuan, for example, last month inspired residents to put face masks on public statues and stage sit-ins in protest, which authorities responded to with arrests and directives to report bulk air mask purchases. Meanwhile, Beijing residents watched municipal authorities list smog as a “weather calamity,” a move lauded by state-run media as a sign of the city’s continued commitment to combatting pollution, but criticized as counterproductive by experts. China welcomed 2017 amid the shroud of urban smog, with 25 cities on air pollution “red alert,” the highest level on a national four-tiered warning system. Beijing was and continues to be on “orange alert” despite dangerously high PM2.5 readings, having recently raised its threshold for the most severe warning color.

As this year’s “airpocalypse” was beginning last month in his native Sichuan, psychologist and popular science essayist Tang Yinghong characteristically took to his public WeChat account to offer analysis. Tang declared China’s entrance into a newly coined historical period: the Age of Smog, which according to his examples began amid rapid urbanization in Europe and the Americas last century. In his essay, Tang asks “how much longer will the Age of Smog last?” Using recent trends in official Chinese responses to smog as clues, Tang arrives at a bleak estimate. CDT has translated the essay in full:

How Much Longer Will the Age of Smog Last?

Just a few of years ago, we used to talk about how lucky we were to live so far away from the capital city. Then, Beijing was already a smog-choked metropolis, while Sichuan had plenty of fog but no smog. As the events of the last year demonstrate, however, Sichuan is already completely submerged in smog.

And it’s not just Sichuan. All across China, you can count the number of places that have dodged the smog on two hands. Just look at the smog index of China’s 106 largest cities: Zhongshan (pride and joy of my friend Ye Kefei) ranks 100. According to China’s smog criteria, the PM2.5 count there is 35; according to America’s, it’s 77. Regardless, when PM2.5 reached 35 over in Japan, it’s cause for a pollution warning, and if it goes past 70, the schools close. If we take the American numbers, even Qujing (which has the lowest smog levels in China) has average emissions higher than threshold for pollution warnings in Japan. And you don’t even want to know about the scores of some of the worst ranked cities! Monitoring stations in Shijiazhuang, for example, have recorded a PM2.5 index exceeding 1000.

Regarding the causes of smog, there have already been plenty of bad jokes and preposterous situations, so I won’t waste my breath on them. What I will say is, China has fully entered the Age of Smog.

If you want to speak up in defense of the people who are responsible for smog in China, of course, you can list any number of cases just as bad or worse than ours. From December 4 to 9, 1952, in London, “the capital of smog,” there was the so-called ‘Great Smog,’ which claimed the lives of some 5000 people, with an additional 8000 deaths over the following two months. In 1950s Los Angeles, meanwhile, photochemical smog caused no end of problems, with more than 400 people over 65 dying in December, 1952. In September 1955, atmospheric pollution and high temperatures caused the deaths of another 400 senior citizens over just two days in LA.

It bears remembering, however, that these “catastrophes” took place over 60 years ago. With new developments in both technical and social systems, events like this have become entirely avoidable in post-developed China.

After all, as early as 1971, The People’s Daily was already publishing articles criticizing environmental pollution in the United States: Like all capitalist monopolies, American corporations don’t care if the people live or die. All they care about is blindly increasing production and chasing after quota-crashing profits. Is it surprising then, that the industrial cities and surrounding regions of the US have grown thick with smog, with garbage piling up in great mountains, while polluted groundwater becomes a serious concern? (The People’s Daily, January 26, 1971, pg. 5) According to the Washington D.C. bureau of Xinhua News Agency: In their crazy pursuit of profits, American capitalist monopolies don’t care if the people live or die. Great quantities of industrial waste flow into the rivers and lakes, while the smoke and dust of their factories fill the air. Toxic gasses spread far and wide, with the problems of air and river pollution seriously endangering the health of the people while laying ruin to the natural resources of the land. Environmental problems like these reflect the growing social crisis of US imperialism. (The People’s Daily, March 11, 1971, pg. 6)

If we say that the period of pollution that developed nations went through 60 years ago was due to ignorance and arrogance, then what is happening today–ignoring the now widely accepted importance of environmental protection and new technological developments, not only repeating the mistakes of the past, but going further to make a bad situation worse–is greed without the slightest scruple.

If the problem was simply one of ignorance, then as awareness of the environment increased, brand new technological solutions and preventative measures would naturally present themselves via the gradual process of experience as we looked for new ways forward. As a result, even more innovative concepts, methods, technologies, safeguards, assessment tools, etc. might emerge to form an entire mature social system. As an already developed nation and region, it was entirely within our power to avoid the pitfalls which have plagued the countries which followed this path before us.

But if the problem is greed without scruples, then we are facing an entirely different problem. Pollution which stems not from ignorance, but from a failure to rein in the privileged minority as it exploits and corrupts the social majority…that sort of pollution is particularly hard to deal with.

First of all, consider the fact that the true source of smog is hidden and can’t be freely discussed. Across society, the people–even our officials who are tasked with deciding policy and steering technological development–are left in the dark. The result is an unknown amount of priceless social resources is being wasted cracking down on trivial activities which have only an incidental impact on pollution, like forbidding people from cooking food, using barbecues, driving automobiles, etc. While these minor activities may indeed have an impact on the formation and worsening of smog, they cannot be the decisive or critical causes. Having no basis in actual research, further restrictions–or even prohibitions–will only provoke the people who are already suffering the effects of pollution. As a result, not only will the smog continue unabated, but distrust for the privileged minority will spread and deepen.

Secondly, the true consequences of smog have been played down and covered up. It’s easy for us to look up the number of people killed in London’s “Great Smog” of 1952. Likewise, it’s easy to look up the fatalities for the “big smogs” that took place in 1950s LA. What we can’t look up is the number of deaths that are linked to smog in China over the past several years. Not one spike in mortality has been exposed by the media and connected back to a period of heavy air pollution. In capitalist countries, any deaths which are even suspected of being linked to a smog incident are recorded as consequences of smog. In a society claiming to be superior, meanwhile, any deaths during a smog event which can be linked to any possible cause other than smog will not be recorded as consequences of smog.

Most fundamentally perhaps, because smog is a result of greed without scruples, and not ignorance, we will only be able to ameliorate smog by reining in greed. From the perspective of psychology, why would any group with an unrestricted monopoly on power ever be willing to rein in their own exploitative and corrupting greed? As long as the consequences of this disaster can be pinned on other parties, or covered up with misinformation, then dealing with the root causes of smog is crazier than an old man trying to move a mountain one shovel at a time. This is especially true when the causes of the problem are so knotty and deep-rooted. Because every action has the potential to set off a domino of side-effects, no effort is spared to prevent collateral damage, and the moment any serious effort to deal with the situation touches on a sensitive spot, fancy words are used to cover up ugly truths.

In the short-term, temporary blue skies have been achieved with shock and awe tactics. But these kinds of goal-orientated approaches to dealing with smog will not work as long-term approaches to be expanded and strengthened.

And so if we really want to know how long the Age of Smog will last, it’s hard to be optimistic. The economy must continue developing, especially in light of the recession we seem to be inevitably sliding into. While GDP has long been the flagpole of politics, in the face of unprecedented social conflicts, maintaining social stability has quickly become the second flagpole. Faced with the equally necessary tasks of safeguarding the economy, preserving social stability, and dealing with smog, our leaders can choose two or risk failing at all three.

And so I’ll do what I can, and keep buying the people I love face masks by the box-load.

What else is there to do? [Chinese]

In 2015, after former CCTV journalist Chai Jing produced “Under the Dome,” a widely viewed (and quickly censored) documentary on air pollution in China, Tang Yinghong explained the psychology behind the film’s record-breaking virality in a WeChat post, which was also translated by CDT. For more history-informed commentary on smog season 2016-2017, see CDT’s recent translation of WeChat user Buck-toothed Zhao’s “If Others Already Made a Mistake, Why Would You Want to Repeat It?”