Word of the Week: Meng the Regent 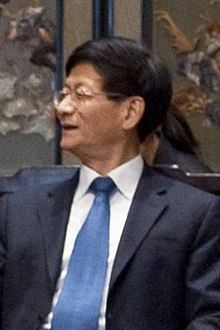 Meng Jianzhu, who according to Guo Wengui, has “practically become […] the shadow emperor of China.” (Source: Wikipedia)

Twitter catchphrase used by gadfly billionaire Guo Wengui, referring to his allegation that Politburo member and Secretary of the Central Political and Legal Affairs Commission Meng Jianzhu is a top agent for the Jiang Zemin family’s political faction, a group that wields far more control over Party politics in 2017 than is generally known. Guo’s term merges Meng’s family name with with the Chinese word 监国 (jiānguó), which refers to the dynastic Chinese practice of allowing a highly significant political aide to act as a regent, handling political affairs when an emperor was abroad or otherwise disposed.

In his September 1, 2017 YouTube video, Guo Wengui, an exiled billionaire with known ties to former top Chinese intelligence officials, laid out an unorthodox explanation for Xi Jinping’s ongoing anti-corruption campaign. In the video, Guo alleged that former Chinese leader Jiang Zemin and his closest political allies (under the direct guidance of Jiang’s son Jiang Mianheng) had been orchestrating much of Xi’s campaign to take revenge on both traitors to the Jiang family, and on adversaries representing other Party factions. Guo described the origins of a close friendship between Jiang Mianheng and Meng Jianzhu, and claimed that Meng had “practically become China’s shadow emperor and the speaker for the Jiang family” (孟建柱书记成为一国之几乎要影子皇帝实实在在的江家的代言人).

In the video, Guo also claimed that Xi Jinping’s appointment to President and General Secretary of the Party in 2012 came on the condition that Meng Jianzhu would be seated as the Secretary of the Central Political and Legal Affairs Commission. This position effectively granted Meng control over all of China’s non-military security apparatus, and according to Guo, allowed the Jiang family faction an enormous amount of control over Party and state affairs and the conduct of President Xi Jinping. Guo claimed:

Following secretary Meng Jianzhu becoming the Secretary of the Central Political and Legal Affairs Commission, the role of this post changed from simply protecting the security of society and the old revolutionaries to also being part of a political package with Xi becoming General Secretary and Chairman. This is where the word “Meng the Regent” comes from!