“Pope Francis Does Not Understand the CCP” 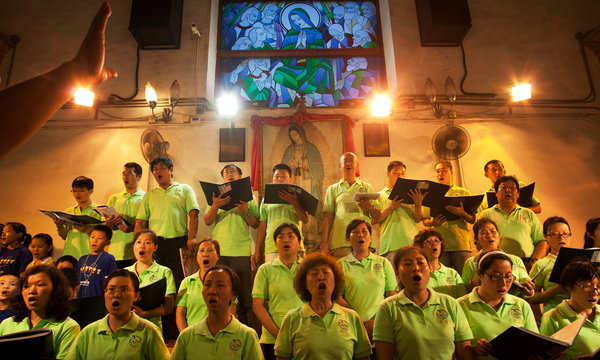 The Chinese government’s unauthorized appointment of Catholic bishops has been a major point of contention between Beijing and the Vatican. To reconnect with Catholics in the country, Pope Francis has made repeated efforts to improve relations with China since his inauguration in 2013. The recent thaw in relations between the two, with prospects of normalizing diplomatic ties, has raised concern among some Chinese clergy that Rome will give Beijing say over the ordination of the country’s bishops. Cardinal Joseph Zen, the 84-year-old former bishop of Hong Kong, has criticized the Vatican for compromising with the Chinese government, saying that the Pope lacks understanding of the Communist Party. Kris Cheng at Hong Kong Free Press reports:

[…] Last month, Zen mentioned in his blog a potential agreement between the Vatican and Beijing whereby the atheist country will have the final say in the appointment of priests. He said that “no deal is better than a bad deal.”

During a visit to Canada and the US, Zen, 85, criticised the optimistic attitude that he observed among top Vatican officials.

“The Chinese government has not made any concessions in the negotiations,” he told the Chinese-language World Journal in New York. “There are some things that we cannot make compromises.”

He told the newspaper that Pope Francis was from South America and was sympathetic to communists: “He does not understand the Chinese Communist Party at all.” [Source]

While some observers believe the rapprochement between the Vatican and Beijing could potentially upset the Holy See’s relation with Taiwan, the Catholic Church has affirmed that it will continue to retain formal diplomatic ties with Taipei. Lawrence Chung at South China Morning Post reports:

Archbishop Paul Gallagher, the Vatican’s Secretary for Relations with States, declared on Thursday in a reception hosted by Matthew Lee Shih-ming, Taiwan’s ambassador to the Holy See, that the Vatican would continue to honour its relations with Taiwan.

He was quoted by Taiwan’s semi-official Central News Agency as telling Lee that he could “guarantee that the Vatican would continue as a committed partner” of Taipei, and that he supported any constructive dialogue between the two parties to improve and enhance their exchanges.

Gallagher said since Chiang Kai-shek’s government and the Vatican established official ties in 1942, there have been many changes in the world, but the friendship and cooperation between the two have never changed. [Source]

In response to this growth of Catholicism and other branches of Christianity in recent years, the Chinese government has launched an extensive clampdown. Officials in Zhejiang, for instance, have removed thousands of crosses and demolished several churches in an attempt to halt the spread of Christianity. Several Christian lawyers and activists were detained and subsequently released for campaigning against cross removals. At a high-level meeting last year, President Xi Jinping warned government officials to guard against religious extremism and foreign infiltration through religion. This followed calls to promote the development of a uniquely Chinese Christian theology that is compatible with Chinese socialism.