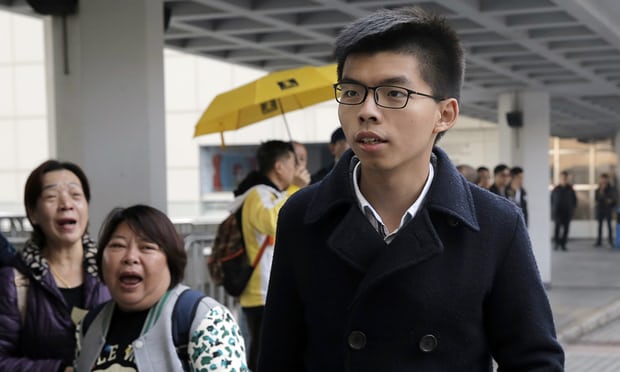 Prominent Hong Kong pro-democracy activist Joshua Wong and other leaders of the 2014 Hong Kong democracy movement were last week nominated for the Nobel peace prize by a bipartisan group of 12 U.S. lawmakers. Twenty-one-year-old Wong, who is now the first peace prize nominee from Hong Kong, is currently on bail pending appeal for two jail sentences related to his activism: a three-month sentence he was given last month, and another six-month sentence handed to him in August 2017. Tom Philips reported on the U.S. lawmakers’ nomination of Wong last week for The Guardian:

[Marco] Rubio, who heads the congressional-executive commission on China, said in a statement: “Wong and his fellow pro-democracy advocates have been unflinching in their peaceful and principled commitment to a free and prosperous Hong Kong. They are an inspiration and their cause has reverberations far beyond their city.”

[…] In their nomination letter to the Nobel peace prize committee, the bipartisan group said the protesters embodied “the peaceful aspirations of the people of Hong Kong who yearn to see their autonomies and way of life protected and their democratic aspirations fulfilled”.

The letter, signed by four Democrats and eight Republicans, including Rubio, said activists such as Wong, Nathan Law and Alex Chow had shown “civic courage, extraordinary leadership and an unwavering commitment to a free and prosperous Hong Kong”.

They had “made significant contributions to peace by actively seeking to safeguard the future of Hong Kong at precisely the time that Beijing has taken steps to undermine Hong Kong’s long-cherished autonomy”. [Source]

The nomination comes months after New York Times editor Bari Weiss proposed that Wong, Law, and Chow be nominated for the prize in an op-ed following their August prison sentences.

Reuters’ Venus Wu last week reported on initial responses to the nomination from Beijing, and from Wong himself:

In a statement sent to Reuters, China’s Foreign Ministry said that Wong and the others involved in the protests had been punished in accordance with the law, labeling the protests they lead as “illegal from head to toe”.

“We urge the relevant U.S. Congressmen to stop interfering in Hong Kong and China’s internal affairs, and do more to benefit the development of Sino-U.S. ties rather than the opposite,” it added.

[…] “I believe the nomination would show the international community and (Chinese President) Xi Jinping how the young generation will persist in fighting for democracy, even if we have to face imprisonment or a permanent ban from public office,” Wong said. [Source]

The glory shall be with members of democratic movements in Hong Kong and China over the past hundred years in case of laurel. https://t.co/M2Z35Dj4OZ pic.twitter.com/JrkXMIsvE4

At the South China Morning Post, Tony Cheung and Phila Siu report comments on the nomination from members of the pro-Beijing Hong Kong government, including Chief Executive Carrie Lam:

Hong Kong’s leader Carrie Lam Cheng Yuet-ngor hit out on Saturday at a group of American congressmen who nominated activist Joshua Wong Chi-fung and two allies for the Nobel Peace Prize, saying that it was “regrettable for foreign politicians to meddle with the city’s affairs”.

He was speaking in his capacity as the acting chief executive, as Lam is on a Beijing trip.

[…] China’s foreign ministry on Friday urged the congressmen to “stop meddling ” in the country’s internal affairs, while Hong Kong’s pro-establishment legislators warned that the nomination would do more harm than good.

Speaking at a media briefing in Beijing on Saturday, Lam said: “The Nobel Prize is an international prize respected by people around the world. It is regrettable that foreign politicians are using [it], apparently for political intervention … and to send political messages.” [Source]

In 2010, after jailed Chinese activist Liu Xiaobo was awarded the Nobel peace prize, Beijing responded with outrage, freezing diplomatic relations with Norway for six years for what they characterized as a “blasphemous” decision by the Nobel committee. Liu died while still in official custody last year from complications related to his late-stage liver cancer, making him the second Nobel peace laureate to die a prisoner of conscience (the first being Carl von Ossietzky, who died in 1938).

The jail sentences handed to Wong and several of his peers were related to their roles in the 79-day Umbrella Movement protests of 2014. He was initially sentenced to community service in 2016, but was given the first prison sentence on August 17 by an appeals court after pressure from the Beijing-backed Hong Kong government. While out on bail pending appeal, Wong was sentenced to an additional three months in prison last month, from which he is also currently on bail and appealing.

Since the 2014 protests, Hong Kong’s pro-democracy movement has faced many setbacks as Beijing continues to attack challenges to its rule in the semiautonomous region. In 2016, four elected pro-democracy lawmakers were barred from taking seats on the Hong Kong Legislative Council after they refused to pledge support for a unified Hong Kong and China. More recently, 21-year-old Agnes Chow learned that her bid to run for political office in Hong Kong would not be possible due to her association with the Demosisto pro-democracy party, which Joshua Wong helped found and serves as Secretary-General of. At The Guardian, Benjamin Haas reports:

The unprecedented move penalises mere affiliation with a political idea and was designed to prevent Chow and her Demosisto party colleagues from entering the Legislative Council.

[…] In the past, authorities targeted independence activists, but with Chow it was her party’s support for the vague idea of “self-determination” that doomed her candidacy.

[…] “The ban against me isn’t personal, it’s targeting an entire generation of young people who have a different view from the government,” she says. “The government only wants young people who will show their affection for China and the Communist party. Any deviation of thought is now unacceptable.”

Chow renounced her British citizenship – a requirement to stand for election – and postponed her studies to run for office, but views neither as a sacrifice.

“Many people may see this as a sacrifice, but it’s not for me,” she says. “I’m committed to fighting for Hong Kong and it’s nothing compared to those who have gone to prison.” [Source]

If you were tasked with organizing an election that looked democratic, but actually ensured that your side had the upper hand, how would you do it? You would find ways to restrict who could run, who could vote, and what they could vote for.

[…] The authorities’ disqualification of Chow is doubly problematic. Not only does it penalize her right to free expression, but it also suggests a harder government line against even those who merely advocate for “self-determination” – the idea that Hong Kong people should make decisions about Hong Kong’s political status and socio-economic developments, a concept that is “completely different from advocating independence,” according to Chow.

[…] Chow’s disqualification also means that not a single member of any of the political groups that grew out of the Umbrella Movement – mostly made up of young people – has been able to stand for LegCo election or represent voters once elected. Hong Kong authorities are not only violating fundamental rights, but they also risk alienating large swathes of the population that support such voices.

Hong Kong authorities have the essential laws to resist being forced to do Beijing’s bidding. That they won’t enforce them to protect Hong Kong people’s rights is an alarming development. [Source]

The Guardian last week published Joshua Wong’s call to British Prime Minister Theresa May, who was on a state visit to China, to uphold her predecessor John Major’s 1996 pledge that “Hong Kong will never have to walk alone,” issued on the eve of the British handover of Hong Kong. In his call, Wong also outlined the steady crackdown on Hong Kong’s pro-democracy movement, and described the vision of Demosisto:

Two years ago, we founded our political party, Demosisto, hoping to strengthen Hong Kong’s youth democracy force that came together during 2014’s “umbrella movement” protests. The peaceful, 79-day demonstrations failed to win any major concessions from Beijing but they did show us the potential our generation had to make a meaningful difference.

[…] The byelections, set to take place on 11 March, are supposed to fill the seats vacated by Beijing’s relentless crackdown. Nathan [Law] is unable to stand because of his recent sentencing on political charges related to the umbrella movement so Demosisto instead decided to field Agnes Chow, a fellow student activist leader.

Agnes met every requirement to stand in the election and looked set to break Nathan’s record as Hong Kong’s youngest legislator. But then, last Saturday, her candidacy was declared invalid due to her support for the idea of Hong Kong’s right to self-determination.

[…]With Beijing’s ever-tightening grip, the opposition camp in Hong Kong is left with less and less space to survive: the exact same stance deemed acceptable in 2016 is unacceptable in 2018. Agnes is hardly the first victim – and she will not be the last. As the remaining voices for civil disobedience are suppressed, the political spectrum narrows even further.

Theresa May must use her time with “Emperor Xi” this week to stand up for Hong Kong’s rights, before it is too late. [Source]

Theresa May was criticized by the British press for being soft on human rights in her meetings with Xi Jinping. The same soft stance appears to have won her accolade from China’s nationalistic state-affiliated tabloid Global Times.

Last October, conservative UK human rights advocate Benedict Rodgers called on the world to “wake up” regarding the threat Beijing poses to Hong Kong’s freedoms. For more on Hong Kong, see prior coverage via CDT.