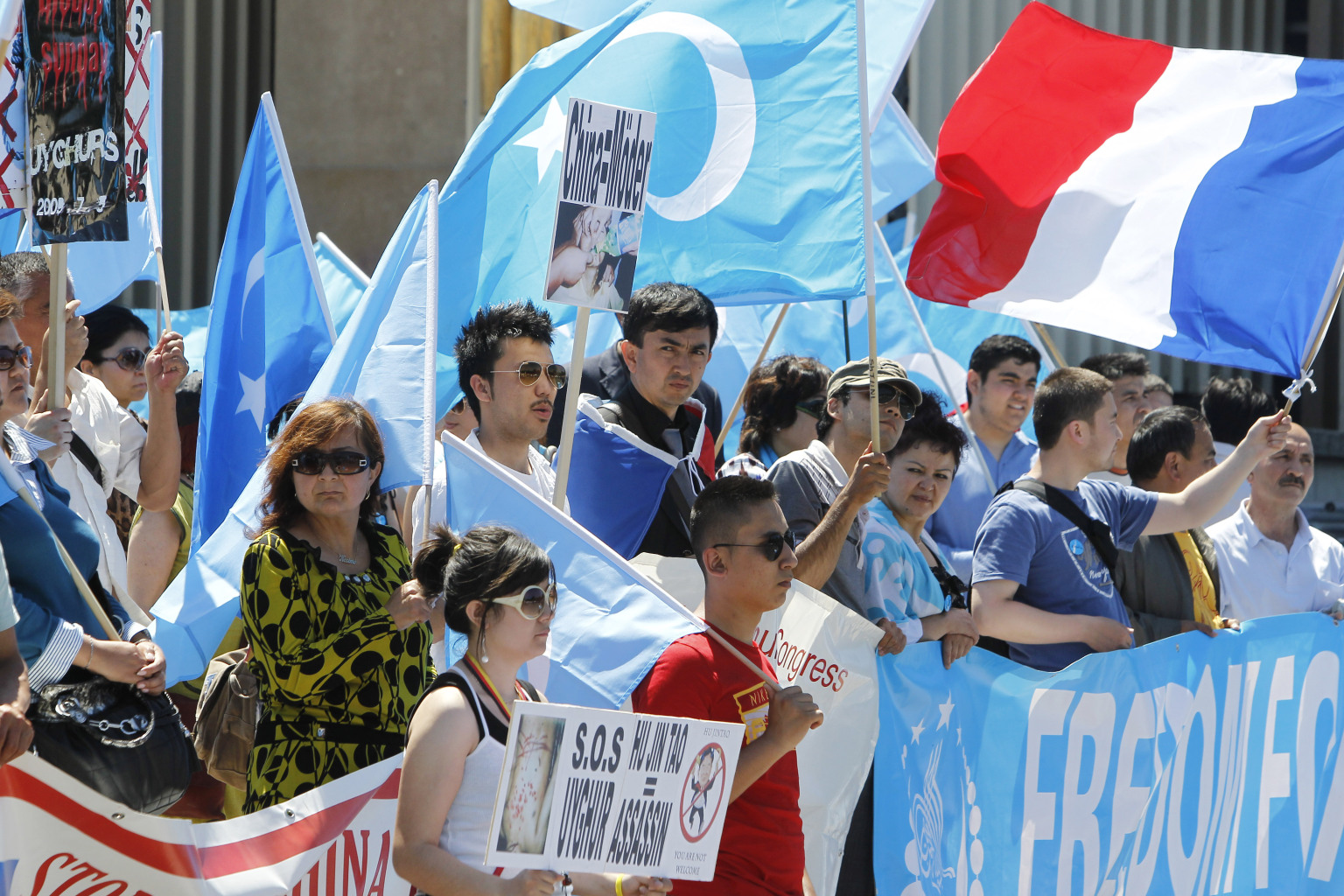 Amid a long-running security crackdown in Xinjiang, ethnic Uyghurs living abroad have been subjected to Chinese intelligence gathering and intimidation efforts. At Foreign Policy, Bethany Allen-Ebrahimian reports on threatening demands from Chinese police for the personal information of Uyghurs who are French citizens, and in some cases their French spouses too:

Police officers from local public security bureaus in China have asked French Uighurs to send their home, school, and work addresses, photos, scans of their French or Chinese ID cards, and, in some cases, the ID cards of their spouses and scans of their marriage certificates if they were married in France.

Chinese police have contacted French Uighurs directly via phone or WeChat, a Chinese messaging app, or have paid visits to their family members in China, asking relatives to convey these demands, according to screenshots of WeChat conversations and a phone recording obtained by Foreign Policy.

[…] FP has obtained evidence of four instances of Chinese police demanding personal information from French Uighurs, beginning in 2017. The Uighur living in Paris said that there are many more cases, and that most Uighurs there are afraid to speak about what is happening for fear that their families back in China will be sent to re-education camps. […] [Source]

Responding to rising incidents of violence in Xinjiang and elsewhere in China, in May of 2014 authorities launched a nationwide crackdown on terrorism. Originally described as a “year-long, ultra-tough, unconventional” campaign, by the campaign was quickly extended by “at least” another six months. In the years since, anti-terror activities have continued, with the steady introduction of increasingly invasive policies—mostly targeting Xinjiang and the Uyghur ethnic minority native to the region—which rights advocates and overseas Uyghur groups blame for exacerbating ethnic tensions. As the ongoing crackdown approaches its fourth anniversary, state media announced early this year that it will continue to intensify over the next five years.

So far, the crackdown has included selective religious fasting bans, local and region-wide rules against “extremist behavior” including wearing veils or beards, propaganda campaigns to promote ethnic harmony, a ban on “extreme” Islamic baby names, a biometric data collection system, and a system of political re-education camps filled with Uyghurs in the city of Kashgar. According to Xinjiang specialist Adrian Zenz, “Xinjiang has become perhaps the most heavily policed region on the planet, with estimated per capita police counts exceeding the record-setting level of former East Germany just before that nation’s fall in 1989.” High-tech surveillance measures being used in Xinjiang are effectively functioning as pilot programs for Beijing’s construction of what CDT founder Xiao Qiang described as a “digital totalitarian state” in a recent op-ed for The Washington Post.

Beijing’s infamous media controls are reinforced in sensitive regions like Xinjiang, creating an information vacuum in the region and making advocacy groups and foreign government-funded media organizations the sources of breaking news on violence and rights abuses in the region. The China-based family of overseas Uyghur journalists who cover Xinjiang have experienced harassment in attempt to silence their relatives abroad. Last week, The Washington Post’s Simon Denyer reported that close relatives of four U.S.-based Radio Free Asia journalists had been recently detained in what appears to be an attempt to silence or punish RFA’s close coverage of the region:

“We’re very concerned about the well-being and safety of our journalists’ family members, especially those in need of medical treatment,” said Rohit Mahajan, director of public affairs at Radio Free Asia in Washington.

“We’re also particularly concerned about the use of detentions as a tactic by Chinese authorities to silence and intimidate independent media, as well as to inhibit RFA’s mission of bringing free press to closed societies.”

[…] Among those who have been detained or have disappeared are several close relatives of Shohret Hoshur, Gulchehra Hoja, Mamatjan Juma and Kurban Niyaz — four ethnic Uighur journalists with Radio Free Asia in Washington. The first three are U.S. citizens, while Niyaz is a green-card holder. […] [Source]

In 2015, the Committee to Protect Journalists expressed alarm over these intimidation tactics, and expressed a renewed statement of concern following Denyer’s recent article. RFA, meanwhile, has reported on a fifth employee with relatives who have been detained in China:

Following reports by the Washington Post, the Associated Press and other international media outlets that brought attention the fate of the four reporters’ families, a fifth RFA journalist on Thursday revealed that three of his relatives and in-laws have been detained.

RFA broadcaster Eset Sulaiman said his elder brother, an educator in the Tianshan region, was picked up by authorities around October 2017 and sent to undergo forced study at a “Political Re-education Camp” in Qomul City (in Chinese, Hami).

His mother-in-law, Saadet Kichik, and father-in law, Memteli Sopi, both pensioners in their 70s, were also detained in October 2017 and sent to the same re-education camp.

“Because of my job at RFA and my wife’s position on the board of the Uyghur American Association, Chinese authorities have retaliated against and threatened us by detaining three relatives in the Uyghur Region,” said Sulaiman, who last saw his relatives in person in 2008.

“Because I cannot contact my family since the end of 2017, I did not hear about my mother’s death in real time,” he said.

“She passed away February 18, but I heard this news four days later through my relative in Sweden. I don’t know what happened to my other brothers and sisters,” added Sulaiman. […] [Source]

RFA also recently reported on threats from Chinese students to report a Uyghur student at an unnamed U.S. university to Chinese authorities for expressing his views on the political status of Xinjiang. Concerns over the policing of speech considered politically incorrect by nationalistic overseas Chinese students have been growing globally. For more on the topic see coverage of an (unsuccessful) attempt to bar the Dalai Lama from delivering a commencement speech at UCSD last year, or of student’s public protest against lecture content in Australian universities, via CDT.