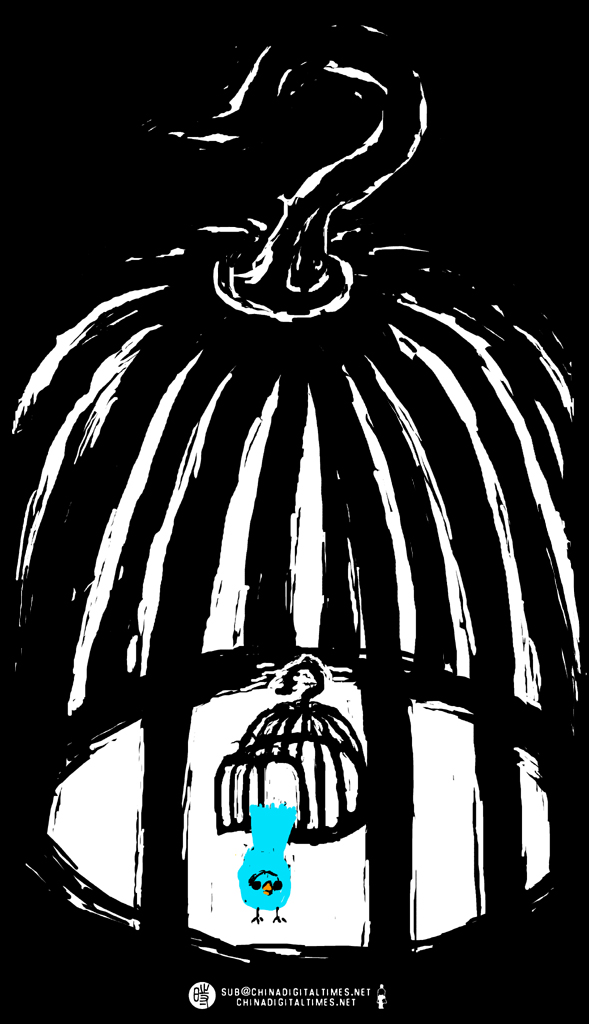 Recent months have seen a spate of detentions and interrogations of Twitter users within China, and deletions of posts or account through hacking or coercion. At The Washington Post, Gerry Shih reports “at least 40 cases” in this “wave of new and more aggressive tactics by state censors and cyber-watchers trying to control the Internet.”

[…] “For the government, the threat exceeds that of anything else. Twitter has become their biggest target to take down.”

[…] “I never touched politics. I’m not a dissident, and I’m not a celebrity,” [financial commentator He Jiangbing] said. “They still took away my voice.”

When police visited him last month to warn him about tweeting, He did not promise to stop. He’s not sure he could.

“We go to Twitter because we have no choice,” He said. “For people like us, if you have to hold in your thoughts, it feels like dying.” [Source]

The Twitter crackdown has been accompanied by reprisals against other individuals using circumvention tools to bypass internet censorship, as The Financial Times’ Yuan Yang reported this week after recent detentions, police summons, and fines against users in Nan’an, Fujian; Chongqing; and Shaoguan, Guangdong. These in turn follow earlier punishments of VPN vendors.

“Over the past couple of years, the Chinese authorities have made legitimate headway in shutting down and limiting the use of VPNs from within China,” said Charlie Smith of Greatfire.org, a censorship watchdog.

“But we have rarely seen individual VPN users get targeted in this way,” Mr Smith added.

[…] Mr Zhu’s case is a worrying sign of further deterioration of internet freedoms, said Maya Wang, a researcher at Human Rights Watch in Hong Kong. In China’s border region of Xinjiang there is already a de facto ban on the use of VPNs, and those caught using the software can be subject to arbitrary detention in “re-education” camps.

[…] “These are little pockets of freedom that people use to come up for air. The government is squeezing out these pockets,” said Ms Wang. [Source]

Will there be more cases where VPN users are punished? Will there be an escalation in the degrees and kinds of punishments? Will people eventually have to go to jail for circumventing internet censorship? These questions are giving me the shivers. https://t.co/hauvcOQek9

The ongoing use of Twitter by state media organizations and personnel such as Global Times editor Hu Xijin has not gone unnoticed amid news of the latest punishments.

Here's a good chuckle. A request on Weibo to crack down @HuXijin_GT For using a VPN to get on Twitter. pic.twitter.com/HTbtT1mVvG

I just saw that some people say scaling the wall is illegal. Others also say that Mr. Hu Xijin scales the wall in order to tweet, so I asked a friend to look into it. This screenshot came back. Sure enough, Mr. Hu Xijin has been obsessed with Twitter since March last year, climbing the wall over and over again, and even celebrating Christmas on Twitter.

Outside the Great Firewall, meanwhile, two LinkedIn users found their accounts and posts briefly hidden from Chinese users before the company changed course in the face of media attention, describing both cases as “errors.” One of the two was British corporate investigator Peter Humphrey, who was arrested and shown confessing on state TV in 2013 and imprisoned for privacy violations the following year before his early release in 2015. From Buzzfeed’s Megha Rajagopalan:

Since his release, Humphrey has been highly critical of Chinese government policy and recently filed a complaint with the British broadcasting regulator over the license given to Chinese state broadcaster China Central Television (CCTV) — the network that once broadcast a video of him in an orange jumpsuit giving a forced confession while he was in detention.

Reached by phone, Humphrey said he believed posting about that complaint prompted Microsoft-owned LinkedIn to censor his profile. He received a notice from the social network on Dec. 24 last year, according to a message he shared with BuzzFeed News, saying his profile would be blocked in China because of the “presence of specific content.”

[…] The message from LinkedIn is worded very similarly to a message sent last week to US-based pro-democracy activist Zhou Fengsuo. In Zhou’s case, the company said the decision to block his profile and activities in China had been a mistake and restored them.

“This is not just about me,” Humphrey said by email after being told his profile had been restored. “How many of these ‘mistakes’ do they make without being forced to correct them? This is not only a China problem. It’s the world’s problem.” [Source]

Zhou, who ranked fifth on the Beijing Public Security Bureau’s Most Wanted list in the wake of the June 4th crackdown, had announced his own case on Twitter:

My LinkedIn account was blocked by LinkedIn in China, a day after my other social account was blocked in China.This is how censorship spread from Communist China to Silicon Valley in the age of globalization and digitalization.
How does LinkedIn get the order from Beijing? pic.twitter.com/CMC8K0aIpo

Update, @LinkedIn just apologized and reversed the decision which was deemed an error.
I applaud the prompt and correct response by LinkedIn.
I hope other companies would do the right job and avoid such error in the future.
Thanks to @owenschurchill for the quick follow up pic.twitter.com/Fx7hKg1Znu

I’m pretty sure LinkedIn has been doing this for a while. I know someone in the US whose profile got blocked in China back in 2014.

In his case, they didn’t pretend it was an error, they just told him that if he removed the sensitive info, his profile would be restored.

It’s possible more well-known people were blocked. The person I know is not a high-profile activist, just a non-Chinese software engineer who practiced Falun Gong.

At The Inkstone, Viola Zhou described how “Microsoft-owned LinkedIn has thrived in China by playing by Beijing’s rules”:

To open in China, the company established a joint venture with local partners China Broadband Capital and Sequoia China. It launched a Chinese-language site with the name Lingying, or “leading elites.”

It regularly removes posts and profile pages deemed politically sensitive by Beijing, such as those related to the Tiananmen crackdown, from its Chinese site.

The efforts have paid off. The number of LinkedIn users in China has grown from four million in 2014 to more than 41 million, the company said on its official Weibo page in May 2018. By comparison, LinkedIn has 154 million users in the US, according to marketing agency Omnicore.

The site is popular with China’s white-collar workers, especially those with overseas experiences, to look for jobs and connect with business partners.

Over the past years, LinkedIn has also partnered with the Beijing municipal government to help bring talent to the Chinese capital, and worked with the Communist Youth League to survey the career interests of university students. [Source]

In his case, they didn't pretend it was an error, they just told him that if he removed the sensitive info, his profile would be restored.