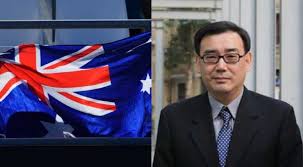 Australia has faced increasingly persistent pressure from Chinese global influence campaigns. In particular, these have led to Senator Sam Dastyari’s resignation in 2017 for accepting donations from a businessman linked to China, and the cancelled publication of Clive Hamilton’s Silent Invasion book. In response, Australia has introduced a “foreign agent” law that would shield local and national politics from Beijing’s interference. In January, former Chinese diplomat and now spy novelist Yang Hengjun was detained while traveling in China, put under investigation for endangering national security, and denied attorney access. The Australian Broadcasting Corporation has since revealed that two Australian citizens, Yang and academic Feng Chongyi, were interrogated by Chinese officials about their ties with John Garnaut. Yang was questioned by Chinese security agents in Australia, while Feng was detained for several days during a trip to China in 2017. Garnaut had been appointed by then-prime minister Malcolm Turnbull in 2016 to work with the Australian Security Intelligence Organisation (ASIO) on a top-secret, still-classified report on Chinese influence. Nick McKenzie and Sashka Koloff detail the results of a joint investigation by ABC’s Four Corners, The Age and The Sydney Morning Herald:

Dr Feng says in his final interrogation session, Chinese security officials threatened him with criminal charges in China if he disclosed the details of his interrogation — including their interest in Mr Garnaut.

[…] The joint investigation can reveal that in 2018, Mr Yang — who is also an Australian citizen — was allegedly intercepted and questioned by Chinese officials in Sydney when he was on his way to meet Mr Garnaut.

[…] “[They questioned Mr Yang] about me, what was the nature of our relationship, what was I doing, what was I working on,” Mr Garnaut said.

[…] Mr Yang’s wife Xiaoliang Yuan has been banned from leaving China and has risked her own safety to speak out from Shanghai and urge the Federal Government to help free her husband.

“I think at least the Australian Government officials should care for its citizens’ wellbeing when they are overseas, should show their concern. But I now feel like, to be honest, I have been very disappointed,” she said. [Source]

Garnaut also revealed that he had warned Yang not to travel to China prior to his detention. AP’s Rod McGuirk reports:

Yang, a 53-year-old visiting scholar at Columbia University in New York and a former Chinese diplomat, did not take Garnaut’s advice and flew to China with his wife, Xiaoliang Yuan, and his 14-year-old stepdaughter.

[…] Chinese Foreign Ministry spokesman Lu Kang said he had not seen the ABC report. But Lu said the Chinese government had always opposed any interference in the internal affairs of other countries.

“As for activities carried out by Chinese embassies and consulates in other countries, these activities aim at promoting mutual understanding between China and the regions or countries where the diplomatic mission are based, and enhancing mutual understanding and friendship among the people, including serving as the bridge of cooperation between the business community of each other,” Lu said.

“I did not see any difference between the activities carried out by Chinese embassies and consulates in other countries and those conducted by foreign diplomatic missions in China,” he added. [Source]

[…] An Age, Sydney Morning Herald and Four Corners investigation can reveal that Mr Dutton did give special treatment on citizenship to Mr Huang’s wife and two children in 2015 by empowering Labor MP Sam Dastyari to conduct a private citizenship ceremony for them.

Citizenship ceremonies are almost always held in public with private “special purpose” conferrals usually only granted for applicants who are ill, have urgent needs or are unable to attend a typical town hall ceremony.

[…] Pressed about the appropriateness of his own role assisting Mr Huang, Mr Dastyari said he’d resigned from the parliament over his dealings with Mr Huang. He said it was “ludicrous” to suggest Mr Dutton had expedited the ceremony as a favour for a Labor senator. [Source]

. @Ageinvestigates on #4Corners says government sources have confirmed Chinese MSS is the prime suspect behind the intimidation of @Anne_MarieBrady

Brady has released critical works on the expansion of the United Front and China’s strategic interests in Antarctica. An initial block by Labour MP Raymond Huo that would have prevented Brady from testifying to the Justice Committee on foreign interference was later reversed.

Meanwhile in the UK, lawmakers have expressed concern that a new extradition law between Hong Kong and China could lead HK authorities to surrender sensitive figures to Beijing. For CNN, James Griffiths details how the disappearances and detentions of Hong Kong booksellers and businessman Xiao Jianhua from Hong Kong could now become more commonplace:

British Foreign Secretary Jeremy Hunt said he had “formally lodged our initial concerns” with the Hong Kong government, he said in a letter to Chris Patten, the city’s last colonial governor.

[…] Business groups too have expressed concerns, prompting the government to remove nine economic crimes from the list of potentially extraditable offenses. The government also changed the minimum severity of offense from those carrying one year in prison to three.

[…] Last week, the Hong Kong Journalists Association (HKJA) said the new law could enable the Chinese government to extradite reporters critical of Beijing, saying it would “not only threaten the safety of journalists but also have a chilling effect on the freedom of expression in Hong Kong.”

[…] “The (law) will make it possible for mainland authorities to get hold of journalists in Hong Kong (on) all kinds of unfounded charges. This sword hanging over journalists will muzzle both the journalists and the whistleblowers, bringing an end to the limited freedom of speech that Hong Kong still enjoys.” [Source]