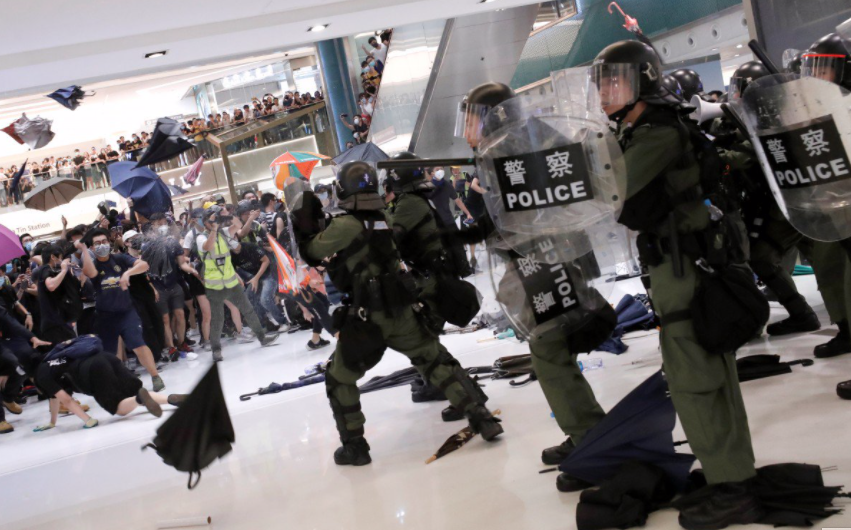 Mass protests in Hong Kong over proposed amendments to extradition laws that would enable extraditions to the mainland began on June 9, attracting a peak of as many as two million protesters on June 16. Regular demonstrations have since continued, with participants broadening their focus to include the future of regional democracy and other societal grievances. On July 1, the 22nd anniversary of the territory’s handover to China, hundreds of thousands marched through Causeway Bay, with a smaller contingent of demonstrators breaking in to, vandalizing, and briefly occupying the Legislative Council chamber. On the weekend of July 8, an estimated quarter of a million protesters marched in an area heavily frequented by mainland visitors, calling for a full withdrawal of the proposed extradition rules, and voicing broader concerns over the threat of Beijing’s encroachment. Protests continued last weekend, with tens of thousands rallying in the Hong Kong suburb Sha Tin, a town on the border with China. At Reuters, Donny Kwok and Felix Tam report on violence breaking out between demonstrators and police in the suburban border town on Saturday, and again after a demonstration in the town on Sunday:

On Saturday, a largely peaceful demonstration in a town close to the Chinese border turned violent as protesters hurled umbrellas and hardhats at police, who retaliated by swinging batons and firing pepper spray.

The government condemned violence during Saturday’s protests against so-called “parallel traders” from the mainland who buy goods in bulk in Hong Kong to carry into China for profit.

It said that during the last 18 months it had arrested 126 mainland visitors suspected of infringing the terms of their stay by engaging in parallel trading, and barred about 5,000 mainland Chinese also suspected of involvement.

Earlier on Sunday, hundreds of journalists joined a silent march to demand better treatment from police at protests. [Source]

At the South China Morning Post, Phila Siu, Zoe Low, and Jeffie Lam report further on the violence in Sha Tin on Sunday:

Amid a heavier police presence than at recent protests, officers warned the crowd shortly before 9pm they would start making arrests if people did not leave.

[…] Many protesters began leaving through the Sha Tin Centre shopping mall as police closed in but there were hundreds left.

Then chaos broke out.

Protesters pelted officers with helmets, bottles and other items from the first floor of the centre and adjacent Lucky Plaza as police marched on the street below. Police chased protesters into both malls and several people were subdued.

Some protesters had tried to leave via the MTR, which was reached through New Town Plaza, but were initially blocked by police. After a short stand-off, officers allowed people to head for the train station.

As they moved towards the station, riot police came from behind triggering a violent reaction from protesters.

The New York Times’ Amy Qin reports on injuries sustained by police and protesters in the clash, and relays criticism of demonstrators from the Hong Kong government, and of police conduct from pro-democracy legislators:

According to the Hong Kong Hospital Authority, 28 people were admitted to hospitals on Sunday for injuries. By Monday morning, eight people had been discharged and two remained in critical condition.

The police said 10 officers had been injured in the clashes. One officer had part of a finger bitten off by a protester after he gouged the man’s eye with it.

The Hong Kong government said it condemned the actions of those protesters who blocked roads, assaulted police officers and disrupted the peace. “The rule of law is the cornerstone of Hong Kong, and the society will absolutely not tolerate such violent acts,” it said in a statement late Sunday.

Several pro-democracy lawmakers criticized the police’s handling of the demonstration, saying that officers who stormed into the mall in full riot gear had set off panic among the protesters. [Source]

More on the weekend rally and clash with police in Sha Tin, as well as a summary of the broadening focus of protesters, from Al Jazeera:

There were clashes between police and some protesters, with riot police using pepper spray and batons against small crowds who took over a road on the sidelines of the rally. Masked protesters responded by building barricades from metal fencing and a standoff with riot police ensued.

[…] [Al Jazeera’s Jamela] Alindogan said the protests have spread beyond the extradition bill as many people have been emboldened by the public support they are getting.

[…] “We’ve spoken to young people here who say they may have just been born in 1997… but they say they are the most disillusioned about the future of Hong Kong.

Alindogan said that weeks into their movement, the protesters have found new ways to express their message “very strongly” and bring the demonstrations to suburban areas like Sha Tin. [Source]

HK Police getting out of hand.

A peaceful protest in Shatin turned chaotic when police appeared out of nowhere with batons and pepper spray.

People backed into a shopping mall, with police chasing and beating them up, despite having families and children inside.#HongKong pic.twitter.com/G7w422215i

Note : Although such chaos was caused by police in the mall, not one window was broken, not one shop looted by any protester. Some ppl even cleaned up the place afterwards.

Pocari and blood. The police were here. pic.twitter.com/hJBRtJiQl5

Ending the thread of today’s protest with sweetness, not rage. During the march a teenage girl was handing out these to everyone who passed. I just found this in my bag as I was unpacking, and remembered this is the Hong Kong I fight for. pic.twitter.com/1V5cUyazaU

Star Vancouver’s Joanna Chiu reports on how overseas supporters of the Hong Kong movement are helping protesters from afar:

In a downtown Vancouver office Thursday, Wong’s phone continually buzzed with messages from protesters on the ground in Hong Kong. He is texting and talking to people as young as 14, answering questions about everything from how to immigrate to Canada to how overseas audiences perceive the police crackdowns on protesters.

The 32-year-old businessman, who has both Canadian and Hong Kong citizenship, said he is one of hundreds of Canadian-based supporters of the pro-democracy movement that has spilled onto the streets of the former British colony.

[…] Wong is the public face of the Canadian supporters, who are part of an informal, international network that has expanded in recent weeks to help Hong Kongers who are protesting the extradition bill.

The unnamed network provides free legal information, public outreach to raise awareness and media relations for protesters, including some who broke into and vandalized the Hong Kong legislature on July 1 and now fear they will be arrested by police.

“If protesters seek asylum in our countries, we are prepared to do whatever we can do to help them settle safely,” says Wong, who was born in Hong Kong and participated in pro-democracy protests before he immigrated to Canada in 2003. […] [Source]

A remaining section of the Berlin Wall in Mauerpark, Germany has been rededicated to the #HongKong anti-extradition law movement, as "Lennon Walls" spread across the world.