Following a recent national edict requiring Chinese TV to be kept free from “sissy boys,” a sneering term for men with styles unbound by traditional conceptions of masculinity, the Beijing Municipal Radio and Television Bureau ordered stations to exercise tighter control over their actors’ aesthetics, and to “foster mainstream values and positive energy in the capital’s audiovisual spaces.” A subsequent episode of Weibo censorship suggested widespread dissent against this move to protect “mainstream” television aesthetics.

Soon after China News Service (the second largest state-run news agency, behind Xinhua) highlighted the Beijing bureau’s statement on Weibo, it promptly censored its post’s comments section. Of over 6,000 reader comments left on the post, China News Service allowed only 10 to be displayed: 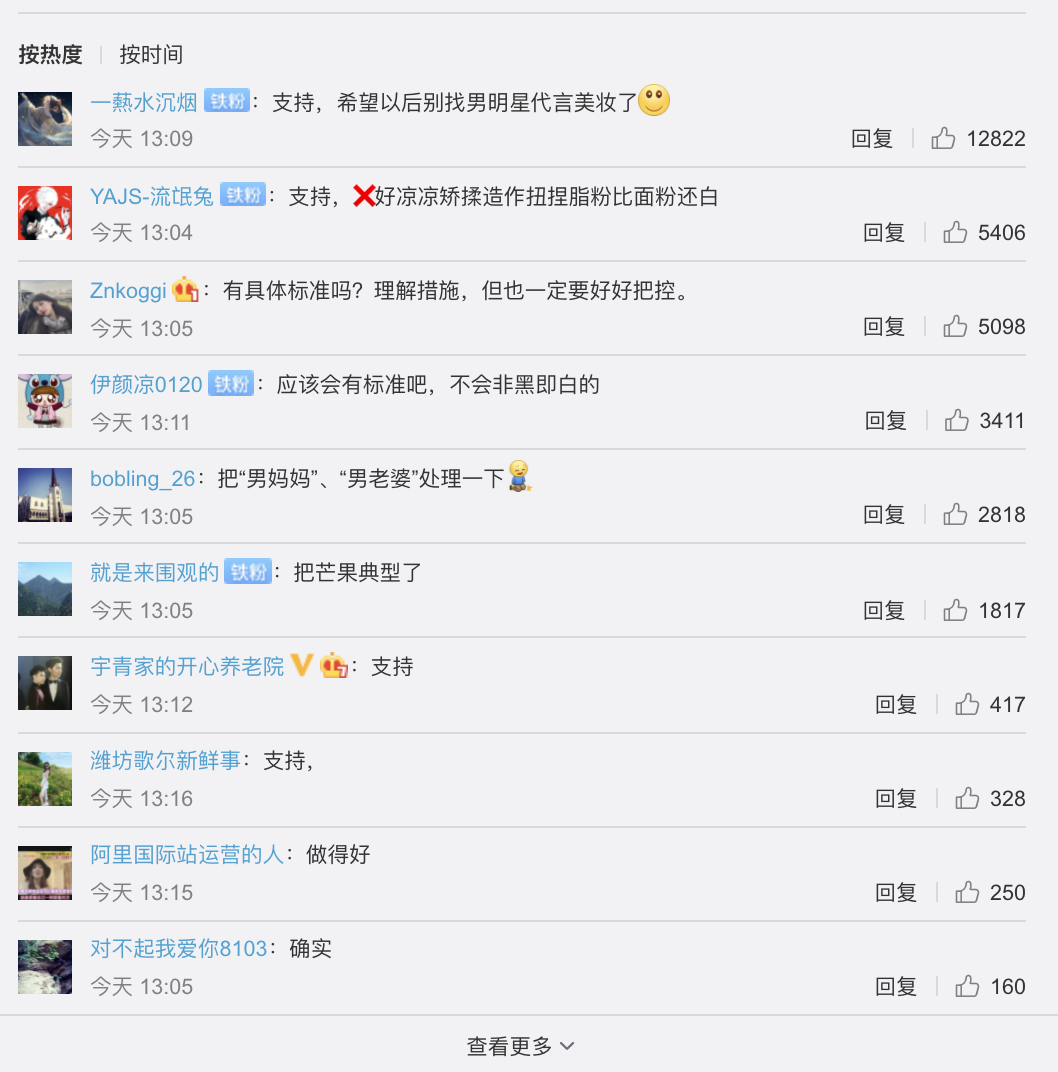 Most of the  comments that passed muster are brief endorsements of the new policy, such as  “Support,” “Good job,” and “Absolutely.” One reads, “I hope they’ll stop asking male celebrities to be makeup brand spokespeople.” Another commenter wonders how the policy will be enforced: “Are there specific criteria? I understand the policy, but it has to be handled well.”

The move to limit the comments section is one of many options in Weibo’s censorship toolbox described in a crowdsourced report recently translated by CDT. Authors can “elect to display comments selectively,” a tool used in this case to try to create a perception of broad support. But attempts to view comments in the order in which they were posted prompted a message reading, “Our apologies, this content is temporarily unviewable”:

The 6,000 missing comments are out of reach, but CDT Chinese has collected Chinese internet users’ subsequent reactions to China News Service’s blatant censorship. A selection showing sarcasm, disgust, and rage are translated here:

失眠的月: Why are all the “selected comments” so one-sided? Is it because no other voices are allowed?

亚尼大帝：Pretty awesome—they managed to scrounge up 10 messages of “support” out of 6,000 comments.

野生小蜗X_R：Get ready for [the return of] foot-binding next year.

小马户口合：This is really sick, sick, sick. Don’t you know that this will further encourage school violence and discrimination? You’re all sick!!!!

幺64洞-汀：Rejecting the stench of paternalism and unfounded male arrogance starts with me.

翛翛月下聞：Please watch out, the car is headed backwards. [Chinese]

Policing gender presentation is a seminal part of the “profound transformation” underway in China’s cultural sphere. Earlier this year, the Ministry of Education hailed gym class as a way to prevent the “feminization” of boys. LGBTQ+ groups and #MeToo activists have been hounded off of social media and subject to intrusive monitoring on campuses. At The Guardian, Oxford historian Rana Mitter reminded readers that the Party’s battle to instill constrictive gender norms dates back to its earliest days:

Gender and sexuality has also been a constant source of trouble for a party that has operated as a fiefdom of a particular type of revolutionary masculinity. As long ago as 1942, the feminist writer Ding Ling challenged Mao Zedong to understand that the role of women in the Chinese revolution was not identical to that of men. He rebuffed her, declaring that class outranked gender as the focus of revolutionary change. Nor is the attack on feminised clothes on men new. During the Cultural Revolution, wearing trendy winklepicker shoes could get you killed as a “class enemy”, every bit as much as having a big house. [Source]