A screenshot of a university lecture warning of “seven false tides of thought” within higher education demonstrates the Chinese Communist Party’s continued fear that students do not ascribe to its ideology. The screenshot seems to stem from a Shaanxi University of Science and Technology lecture on “Issues and Challenges Confronting Ideological-Political Work in Higher Education.” The seven supposedly erroneous lines of thinking are drawn from a directive issued by the Party’s Central Committee in 2013, widely known as “Document 9,” that warned: “Western anti-China forces and internal ‘dissidents’ are still actively trying to infiltrate China’s ideological sphere.” CDT has translated the slide and a selection of netizen reactions archived by CDT Chinese: 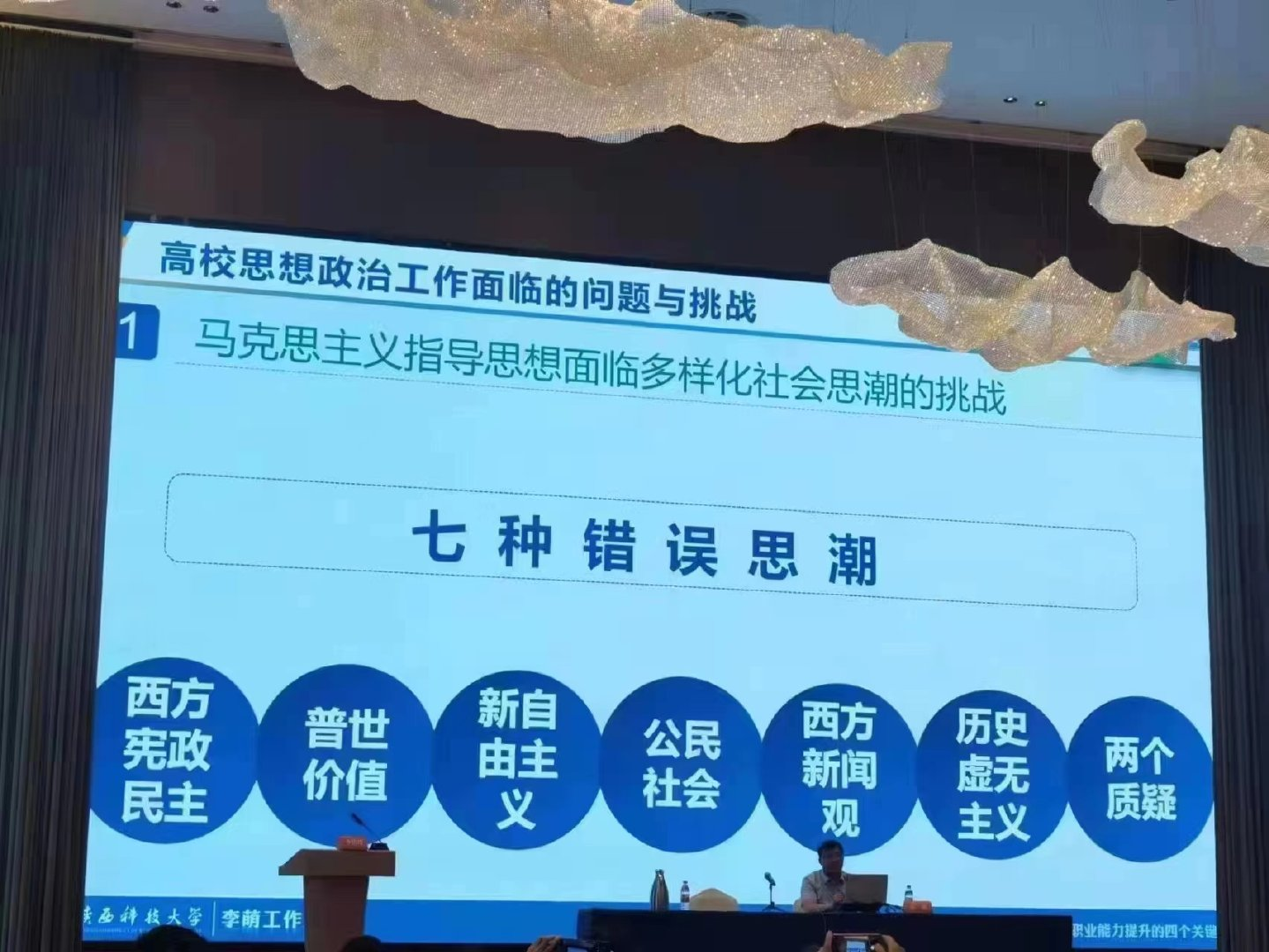 北国微音2020：These are precious [legacies] of human civilization. Why must we shut them out?

Hongmo68：I’m telling this joke with a straight face: unification of thought.

神七仔：I don’t dare speak on the other points, but I do want to quietly inquire, how is it that promoting “civil society” has become a false ideology? Are we not citizens? Is linking “citizen” and “society” together somehow reactionary? It wasn’t until I checked my ID and saw “Resident Identification Card” written in large characters that I came to the realization: you are a resident, you are a peon … but a citizen? How dare you!

安安年年55555：Why is it that everyone else is wrong and only you are right? Why is it that all of the developed countries in the world advocate for diversity, but you can only tolerate one voice?

Wenjun7011：Are “civil society” and “universal values” wrong, too? Aren’t those included among our “Core Socialist Values”?

小企鹅1551：This is phenomenally anti-intellectual. There’s no need to discuss whether one or more of the above ideologies might in fact be harmful, seeing as even “universal values” and “civil society” have been lumped in with ideologies that must be categorically rejected. They don’t want you to think too deeply about it, but rather just shut up and obey. The Western humanities and social sciences’ “critique of modernity” is situated within “postmodernist angst,” whereas we [in China] are still living in a pre-modern age.

OldYouthZ：These seven “erroneous ideological trends” actually come from an April 22, 2013 internal directive on the state of the ideological sphere: “A Communiqué on the Current State of the Ideological Sphere,” published by the General Office of the Central Committee of the Communist Party of China. The document states that it is necessary to “ensure that the media leadership is always firmly controlled by someone who maintains an identical ideology with the Party’s Central Committee, under General Secretary Xi Jinping’s leadership.” (It’s interesting that at that time they still referred to him as “General Secretary” rather than today’s “Core.”) [Chinese]

The lecture can be construed as part of an effort to turn China’s security apparatus into a “hulking fortress,” as described in a groundbreaking New York Times report by Chris Buckley and Steven Lee Meyer about the country’s National Security Commission. While describing Xi Jinping’s efforts to stave off a “color revolution,” fear of which he has told interlocutors keeps him up at night, the report described how schools have become a frontline of the security state, with even elementary schoolers encouraged to become informants for the Ministry of State Security:

Chinese universities were pressed to observe and report on “ideological” problems among teachers and students, which included keeping track of their online comments. Security officials ordered cadres to closely monitor persistent protesters, people with histories of mental illness, former prisoners and others deemed risks to safety and stability.

In one school in Beijing, children this year drew pictures of vigilant citizens beating up masked villains. “In defending national security, nobody is an outsider or a bystander,” said a presentation at an elementary school in northwest China.

It reminded the pupils of the Ministry of State Security’s phone number for reporting anything suspicious: 12339. [Source]

Reporting on peers’ or professors’ heterodox ideologies is a potentially lucrative endeavor. In June, the Ministry of State Security standardized rewards for informants, offering up to 100,000 yuan (nearly $15,000 U.S. dollars) for important tips. In December 2021, a university professor was fired after a student recorded her remarks about the Nanjing Massacre while referring to her as a “walking 500k,” slang for the reward one could once earn for turning in purported spies. More recently, there was a brief panic about foreign infiltration of the Ministry of Education and the textbook industry: according to nationalistic online commentators, the illustrations in certain textbooks were ugly to the point of being “evil” and ideologically suspect. As part of an effort to enforce ideological conformity, English lessons have taken a backseat to Xi Jinping Thought in some school districts. Yet despite the state’s best efforts to bend students towards its ends, student protests have continued into an era of increasing ideological surveillance, as documented by CDT’s Alex Yu.