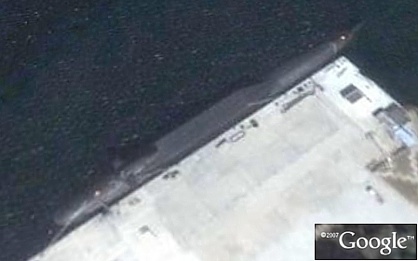 “Snapped the Google image showing the secret sub.” From smh.com.au:

The first publicly available pictures have emerged of China’s new Jin-class nuclear-powered submarine, which is capable of firing intercontinental ballistic missiles against the US.

Hans Kristensen, a nuclear weapons analyst for the Federation of American Scientists, spotted the new submarine while reviewing photos of north-eastern China that had been snapped by a commercial satellite for Google Earth. The photos taken late last year show the submarine alongside a pier at the Xiaopingdao Submarine Base south of the city of Dalian. [Full Text]

These two commercial satellite images of the old Xia-class SSBN (top) and the new Jin-class SSBN show the different major compartments. The Jin-class appears to be approximately 35 feet (10 meters) longer with an extended missile compartment. Both images view the submarines from a “eye-altitude” of approximately 500 feet (152 meters).

The U.S. Office of Naval Intelligence estimated in 2004 (bottom) that the Jin-class SSBN would have 12 missiles.

US Warns China Against Crimea-Style Action in Asia

Maritime Dispute on Display in the Sea and at The Hague

U.S. Weighs In on South and East China Sea Disputes