Jiaxing residents demonstrated their complaints against Jiaxing’s Buyun Garbage Incineration Power Plant by laying waste outside of the disposal plant. From Xinhua: 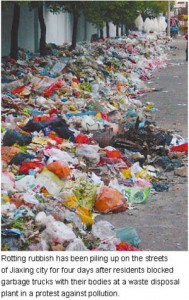 Rotting rubbish has been piling up on the streets of Jiaxing City for four days after residents blocked garbage trucks at a waste disposal plant in a protest against pollution.

Villagers living near Jiaxing’s Buyun Garbage Incineration Power Plant gathered at its gate on Saturday and lay down in the road, stopping rubbish trucks from entering. They claimed the smell and dust the plant produced had affected their health and the harvest.

A spokesman for the local government said it had persuaded the villagers to leave, with promises to replace the plant’s old furnaces with new ones that meet environmental standards.