As Steve Jobs’ death triggered enormous reactions from Chinese netizens, the Beijing real estate tycoon Pan Shiyi has also joined the wave by posting the following tweet on his microblog:

@Pan Shiyi: Apple’s board of directors should make the following decision: To immediately manufacture iPhones and iPads that are under 1000 Chinese Yuan (about $157 U.S. dollar) so that more people can afford Apple products. This is the best way to commemorate Jobs.

The following response, which focuses on China’s surging housing prices rather than Jobs’ death, has apparently caught many netizens’ attention and been widely re-posted:

@Tang Rouding 9983: When Mr. Pan passes away some day, your company should offer homes that are under 1000 Chinese Yuan per square meter. Over a billion people will commemorate you by then.

Pan soon deleted the original tweet. However, his new title, “the 1000 Pan,” has been spread all over the cyberspace. Meanwhile, a new form of currency named “Panbi,” has also been created by netizens [“bi” means money in Chinese]. According to netizens’ definition, Pan is the base unit of Panbi, and one Pan equals 1000 Yuan/sq m. Thus, an apartment home that normally costs 24,000 Yuan/sq m would only cost 24 Pan/sq m in the world of Panbi. Here, netizens have turned their frustration at China’s housing bubble into a humorous yet sarcastic joke.

Below is a sample of a bill of one Panbi which features Pan’s portrait:

On top of the bill it reads “SOHO Bank of Real Estate of China.” Pan Shiyi is the founder and president of SOHO China, the largest real-estate developer in Beijing.

Netizens have also made a chart comparing major cities’ average housing prices by using Pan as the currency unit: 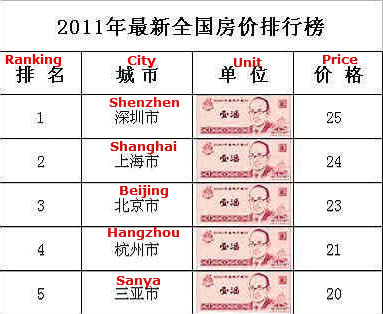 Following are some more examples of netizens’ responses that explain why there would be a joke like this in the first place:

@Yezhiyexing: Mr. Pan’s hoping that we’re playing with our new iPhone4 so that we can temporarily forget the pain of having to pay dozens of Pan for our homes.

@Post-70 Xiaoheizi: It’s not just a random saying or whatever Pan was trying to justify–People are complaining about the skyrocketing housing prices with contempt and frustration.

What’s In It For China’s Mistresses?

China’s ‘Ghost Cities’ May Not Be So Spooky

Ghost Towns: No Place To Live If There’s No Work