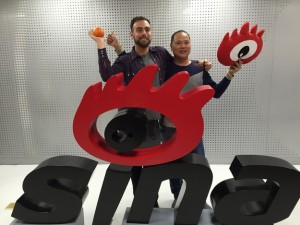 At China Real Time, Josh Chin reports on liberal businessman Wang Gongquan’s public reappearance following his three-month detention in 2013-14. This reemergence, he writes, highlights the stifling of political outspokenness from influential “Big Vs,” or verified microbloggers:

Wang Gongquan has taken pains to stay out of the public eye since he was released from police custody in January 2014 after admitting he helped finance protests linked to prominent legal activist Xu Zhiyong. But that now appears to have changed, with the venture capitalist venturing forth to speak on business topics.

[…] Mr. Wang appeared alongside friend and fellow business celebrity Pan Shiyi, founder of property developer Soho China Ltd. The smooth-talking Mr. Pan is also known for his civic-mindedness, having led a massive online campaign that forced the government to be more transparent about air pollution, but has toned down his social presence since he was shown stuttering his way through a 2013 China Central Television interview on the responsibilities of influential microbloggers.

[…] In returning to the topic of business, Mr. Wang appears to be following in the footsteps of Charles Xue, a Chinese American venture capitalist who used his large following on social media site Weibo to occasionally criticize the government. In Oct. 2013, Mr. Xue was arrested on charges of soliciting a prostitute and shown on CCTV apologizing for misusing his influence online. He has since returned to Weibo, but has avoided writing about or reposting political content. [Source]

The chilling of Sina Weibo and the rise of competitors have left the once vibrant platform severely diminished. At brandchannel, Abe Sauer describes its efforts to rekindle something of the old flame through the story a Buzzfeed reporter and the Chinese man who bought his stolen iPhone:

On Monday’s edition of The Ellen Show, Chinese restaurateur Li Hongjun (now and forever known as “Brother Orange”) and BuzzFeed writer Matt Stopera appeared on the daytime talkshow to tell their heartwarming tale of a stolen-and-found iPhone, a cross-cultural friendship and an “only on social media, kids” modern-day fable.

The global phenomenon that is the “Brother Orange” story is an international triumph of a media brand. But it’s not BuzzFeed, the website that published the story, that’s responsible for the global viral sensation. It’s Sina Weibo, the so-called “Chinese Twitter” social network that played an active role in making it happen.

[…] After a crackdown on prominent users, Weibo saw diminishing influence and popularity throughout 2014. While Ellen, BuzzFeed and Brother Orange may make “Chinese Twitter” look robust, it’s not the case. Brands like 163.com have recently abandoned the platform. Now the Brother Orange story is bending America’s perception of Weibo’s vitality. [Source]