Scenes from a Forced Demolition

Forced evictions have become a routine fact of life in China. With all land owned by the state, developers often work in cahoots with local officials to forcibly demolish homes or reclaim farmland to make way for new construction projects. Some residents protest the demolitions or demand more compensation, and those who refuse to leave their buildings have become known as “nail houses.” These demolitions often become contentious, and police officers routinely accompany the demolition crews.

Recently in Zhongshan, Guangzhou, a local court declared that the home of a 95-year-old woman, Chen Runxin, could be demolished. Mrs. Chen did not oppose the order, but because the two sides had not agreed on compensation, she had not yet moved when Zhongshan Number One People’s Court Executive Bureau sent a demolition crew to begin work. At the time, Mrs. Chen was not home as she had fallen earlier that day and was in the hospital recovering. But her three daughters came to the demolition site. The photo below shows her youngest daughter, who shouted, “My mother is still in the hospital, you can’t demolish her home now!” As she began to run toward the house, police grabbed her and put her in a police car. 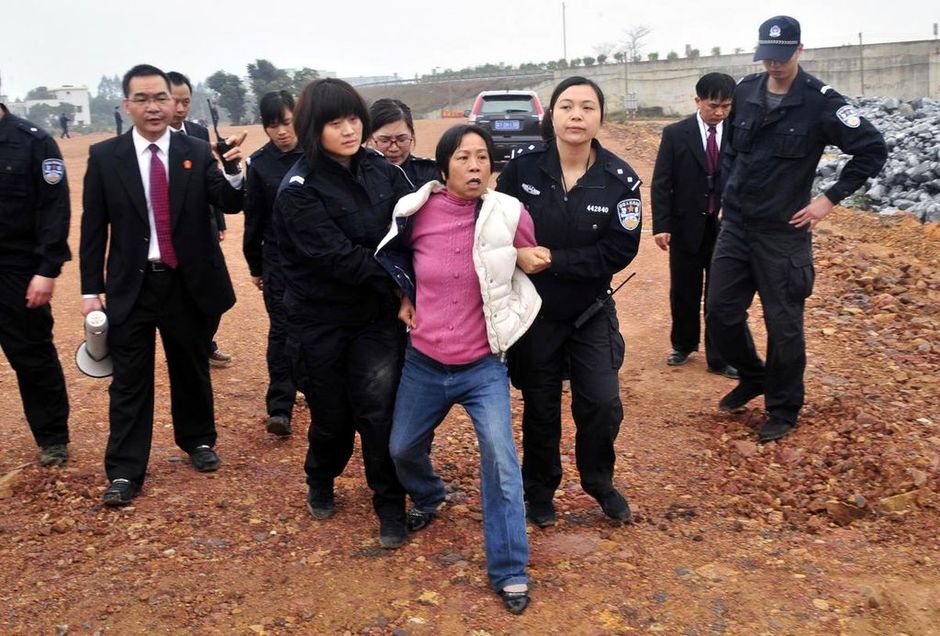 All the photos from the scene can be seen here, as well as slideshows of other demolitions, which netizens have posted online. Read more about “nail houses,” forced evictions, and land rights in China, via CDT.