Photo: Your Day Has Finally Come

Below is the front page of the Zhujiang (Pearl River) Evening News, a Guangdong daily, on March 16, the day after it was announced that Bo Xilai had been dismissed as Party Secretary of Chongqing. March 15 is also Consumer Protection Day, when fake goods are publicly destroyed in China. 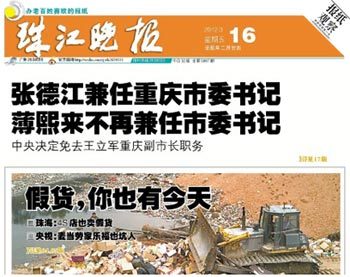 The two headlines at the top read:

The headline overlaying the photo reads: