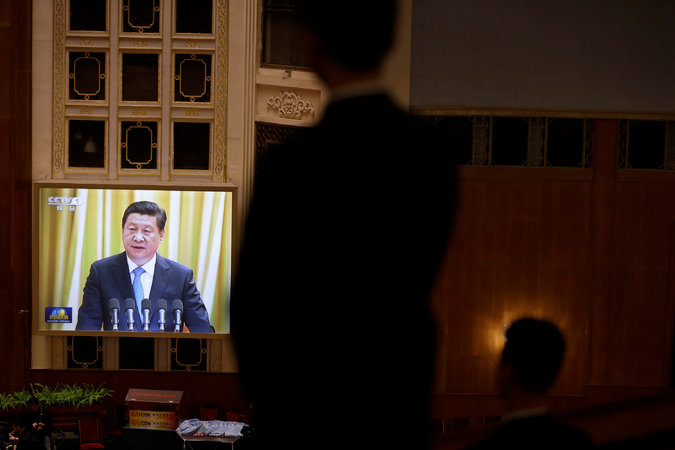 At South China Morning Post, Jun Mai reports that the director of the General Office of the Communist Party’s Central Committee has called for “absolute” Party loyalty among top cadres and government agencies.

China’s top presidential aide issued a sweeping call on Wednesday for all Communist Party agencies of ministerial level and above to have “absolutely loyalty” to the party, and for that allegiance to be their fundamental political requirement.

Analysts said the call was a demand for loyalty to President Xi Jinping, the party’s general secretary.

It also comes as party chiefs of several provinces and cities have referred to Xi as the “core” of the party’s leadership, a term that has only been widely used in the past to refer to former leaders Deng Xiaoping and Jiang Zemin.

There are around two dozen such party organs, ranging from the vice-ministerial to vice-state level, including the central propaganda department, the Central Organisation Department, the party’s anti-graft watchdog and People’s Daily. “Party organisations of all levels and all party members should be aligned with the central leadership of the party led by Xi Jinping in actions and thoughts,” Li said. [Source]

Li’s appeal echoes a series of calls by Xi himself, ordering military leaders to be “politically sensible,” the Politburo to follow his lead, and the Party as a whole to refrain from asking “questions that should not be asked.” New “Party Standards on Integrity and Self Restraint” issued in October banned members from “improper discussion” of central government policy, while the Central Commission for Discipline Inspection has announced a new emphasis on political loyalty in its inspections. Observers have expressed concern that this insistence on absolute unity is leading to missteps in areas like Taiwan, the South China Sea, and economic policy.

Underlining the dangers of disunity to both the Party as a whole and the individuals involved, a new book published by the Chinese government’s Central Documents Press describes plots by senior members to “wreck and split the party.” The book, titled “Edited Excerpts From Discussions by Xi Jinping on Tightening Party Discipline and Rules,” contains 200 extracts from internal speeches and essays that Xi composed between 2012 and 2015. The New York Times’ Didi Kirsten Tatlow reports:

The Chinese news media carried scattered reports of the speech last year, but publication in book form by an authoritative press makes it a statement of what China wants the world to know, said Liao Ran, a German-based employee of a nongovernmental anticorruption organization that he asked not be named because he was discussing this politically sensitive issue as an individual.

The speech shows that Mr. Xi believes he has vanquished his rivals, Mr. Liao said. “When you look back on these past years, he has dealt with all these challenges, so he’s superconfident,” he said.

In the speech, Mr. Xi said: “From cases investigated over the past few years that involved serious violations of party discipline and the law by senior cadres, especially those of Zhou Yongkang, Bo Xilai, Xu Caihou, Ling Jihuaand Su Rong, it can be seen that the problem of damaging party political discipline and rules was very serious and merited serious attention.”

[…] “The greater these people’s power, the more important their position, the less seriously they took party discipline and political rules, to the point of recklessness and audaciousness!” Mr. Xi said. “Some had inflated political ambitions and for their personal gain or the gain of their clique carried out political plot activities behind the party’s back, carried out politically shady business to wreck and split the party!” [Source]

All five individuals mentioned in Xi’s speech have been politically sidelined since 2012. Zhou Yongkang and Bo Xilai are serving life sentences for corruption and abuse of power. Ling Jihua stands accused of taking bribes and committing sexual misconduct. Su Rong was expelled from the Communist Party in 2014 for violation of Party discipline. Xu Caihou was put under investigation on suspicion of bribery in 2014 before dying of bladder cancer a year later.