Weibo: “Something Big Has Happened.” But What? 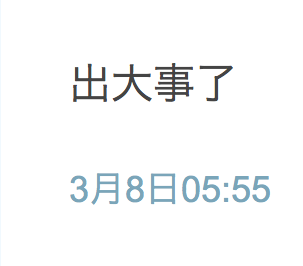 Mao Shoulong, Dean of the School of Public Management at Renmin University in Beijing, posted on his Weibo “Something big has happened” (出大事了). Within hours, the post had over 2,600 forwards and almost 1,000 comments. A number of netizens wrote on Weibo that they spent the night “scaling the wall” to get more information. Usually only a handful of people comment on Mao’s Weibo. Many netizens suspect the terse post refers to Bo Xilai’s absence from a plenary session at the National People’s Congress. Some even speculate that Bo was in a car accident. There is currently no information available to substantiate these claims.

@GuSu: Brother Mao is so mysterious, he won’t say what big thing happened. Is Bo in the slammer? Or else who’s run off to the embassy now?

@MyStupidWorld: There’s a whole lot of room to daydream here.

@GreenHillDelicateWind: Probably has something to do with Wang Lijun.

@YangZijiang: Quick, scale the wall and look for news.

@LunaZHONGBellFall: I’ve climbed over many layers of wall. Besides yesterday morning’s news of Hu Jintao calling Wang Lijun a traitor, there’s no latest development or confirmation of this news.

@TangGu2010: I’m outside the wall scouting for everyone. The South China Morning Post reports that Hu denounced Wang. What this means for Tomato is hard to say.

@freemanVampireDiaries: The Great Pacifier of the West1 is finished.

@OscarUI: It looks like Bo doesn’t have backstage support! Something would have happened sooner or later! Don’t know what will happen this time.

@LiuFengning: Did the Toad return to the West2?!

@LongWangdong: Did something bad happen in Tomato? He wasn’t at the Congress today.

@Didierzheng: First it was his absence, now what’s going on????

@SnowflakeGarden: Zao Bao special report from Beijing correspondent Han Yonghong: Chongqing Party Secretary Bo Xilai was absent from today’s session of the National People’s Congress. This afternoon Bo announced that he would participate in the deliberations of the Chongqing working group.

@LiuJianwei_Weibo: What kind of society is this? What kind of time is this? One short sentence shrouded in fog is forwarded thousands of times. I’m going to faint.

@AdministrativeLawLinPengchao: In my view, blowing up a sentence that says nothing is the real “something big that happened.”

1 “Great Pacifier of the West” (平西王) is a nickname for Bo Xilai, earned through his crackdown on organized crime as Party Secretary of the southwestern city of Chongqing.
2 “Return to the West” is a euphemism for passing away.