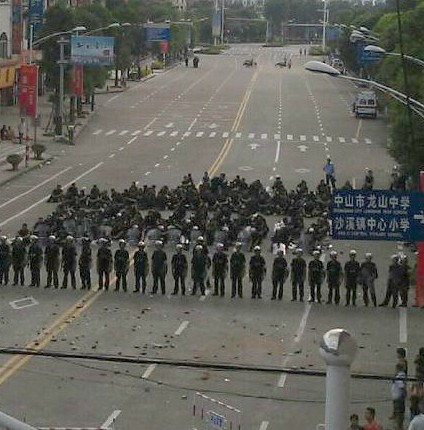 As of June 27, the following search terms are blocked on Weibo (not including the “search for user” function):

Riots in Zhongshan, Guangdong: On Monday a fight broke out between a child from Sichuan and local children in the village of Haotu in Shaxi Township, Guangdong Province. The argument over began over picking mangos and lead to blows. A local security officer was beaten in the scuffle. Migrant workers from Sichuan then began to gather, protest and riot. Officials kept silent about the incident for two days before announcing “the scene is clear.” Video of the clashes have been removed from all major websites. More on the incident from CDT and the BBC.

Protest in Zuotan Township, Foshan, Guangdong: Residents encircled city hall for about 12 hours on Monday to demand an explanation of the cheap sale of their land from the village Party secretary. Riot police dispersed the crowd early Tuesday morning. More from CDT.