Diaoyu Protesters “Backed by the State” 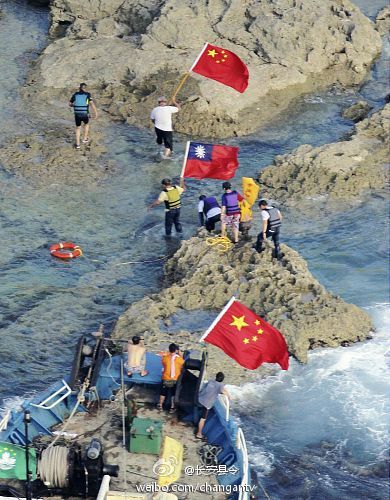 After the arrest of Hong Kong activists on the disputed Diaoyu (Senkaku) Islands, Photoshopped images are not the only thing rankling netizens today. People have also called foul on a Global Times editorial titled “Coordination Needed to Succeed in Diaoyu.” Besides the expected claims to Chinese sovereignty over the uninhabited islands, the paper sternly lectures:

Chinese society needs to understand that grass-roots activists for Diaoyu are being backed by the State. While there is no open official support of the activists landing on Diaoyu, that does not mean these activists are acting on their own. Their safe trip to Diaoyu, and eventual safe return, are both the result of China’s national strength.

…Meanwhile, Chinese need to be clear that China cannot retrieve the Islands now. This would mean a large-scale war, which is not in China’s interests.

Plenty of netizens are not buying this argument, but they are quickly being shushed. Sina Weibo has disabled the commenting function on some posts linking to this article, including, ironically, on @SinaComment (新浪新闻). (Since the screenshot below was posted, five bland comments have appeared.) NetEase and other portals have also limited discussion. CDT Chinese has gathered a few of the more interesting comments on the subject:

BlueNetizen: At the time of maintaining stability dominants everything elses, where do you get the strength to protect the Diaoyu Islands? When the underclass is looking down the barrel of a gun, how can they start a “war?” The subjects of the Celestial Empire need to be clear on this point: this country doesn’t belong to you, it belongs to the “representatives.” “Protecting Diaoyu” just causes trouble for the representatives! I bet as soon as the spotlight moves these protesters will be arrested.

LonelyParasolTree: F**k that, it’s not in the interests of a certain Party. Their wives and kids and assets are all in the U.S. Because the U.S. and Japan are on friendly terms, if we go to war with Japan the U.S. will confiscate or freeze all of their assets and take their families hostage.

HelpaBrotherMakeBooze: Reading this article is like swallowing a fly. The whole thing is for a domestic audience. If it isn’t blaming the outsiders it’s making hardline negotiations, like a little shrew of a woman.

FaroffQingpingBay: Medvedev can make a show of his visit Kunashir Island. Lee Myung-bak can pay a very public call on Dokdo. Instead of a bunch of ordinary people “backed by the State,” it would be better to send our esteemed Chairman HU to walk around Diaoyu himself and enjoy the sea breeze.

weiweizi_hw: Oh yeah, all their investment has gone into stability maintenance. There’s nothing left for retrieving the Islands.

TotalPossession: I demand the chengguan go to Diaoyu. Lend me 3000 chengguan and return the might of China!