Drawing the News: Of Melons and Men

City management officials (chengguan), a sort of para-police force patrolling the streets, are known for their brutality towards street vendors throughout China. But harassment and beatings are one thing. Rarely does a confrontation with chengguan end in death.

Watermelon vendor Deng Zhengjia died at the hands of chengguan in Linwu, Hunan Province this Wednesday. When the local government decided to take Deng’s body, hundreds of villagers came to stand guard. The face-off sparked bloody clashes with the police. Deng has been compared to Mohamed Bouazizi, the Tunisian fruit vendor who self-immolated after the police seized his cart, sparking the Arab Spring.

Cartoons reflecting on Deng’s death, the support of his fellow villagers, and the police response have cropped up on Weibo. CDT has collected the handful below. CDT Chinese has even more.

“This is called the civilized law enforcement all-in-one package…” A chengguan dealt Deng a fatal blow with a steelyard weight, which this officer has slipped off a handheld weight to swing around with pride. The man on the right holds the badge of the officer who hit Deng with the weight; Deng grabbed the badge as he was being assaulted. (Dashixiong)

A peaceful “Chinese dream” of sharing watermelon with chengguan, and the brutal reality. (Mengchenshang)

What is the “weight” of a human life? (Xiao Mao)

Can we measure its fragility? (Qin Chengzhen)

Crushed by the weight of Linwu, drenching all of China in watermelon juice. (Kuang Biao) 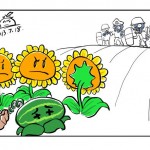 A chengguan lights the fuse while a SWAT officer stands by with gas. (Gouben)

Cartoonist Tantou Jieren wrote a poem to accompany his illustration, titled “Do You Know Why I’m Angry?”: Are the people your enemies? / Are the people your watermelons? / Aren’t you human? / Let me tell you / You have no idea what seed you’ve planted (《你知道我为什么愤怒么？》 人民是你们的敌人么 人民是你们的西瓜么 你们不是人生的么 那告诉我 你们哪一种动物杂交出来的) (Tantou Jieren)

“The people have steelyard weights in their hearts.” (Qiuqingzi)

Translation: Propaganda in Urumqi Amid Crackdown