Symptoms of the Hukou System and a Map to Reform 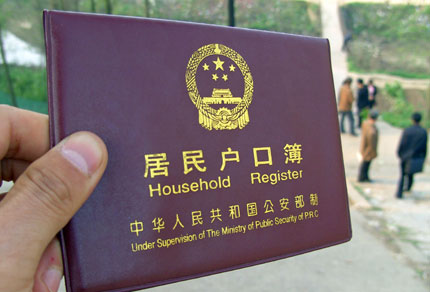 China Dialogue has republished a Caixin editorial from June outlining the benefits that overhauling the hukou household registration system would have towards urbanization—a key economic engine identified by China’s ruling administration—and laying out a step-by-step plan towards the long-awaited reform process:

As the country enters the urban age (more than half its population now lives in urban areas), a critical part of the Chinese dream is the “urban dream” – the promotion of urbanisation to generate household consumption to put the economy on a sustainable footing. Yet a third of the 700 million Chinese urban dwellers today are not truly “urbanised”. They are the migrant population or “floating population”, who do not have an urban hukou, or household registration. The hukou is a little red booklet that entitles the bearers to enjoy the full rights of urban citizens.

To accomplish real urbanisation, migrant workers need to become full urban residents. That requires offering them an urban hukou with the aim of ultimately abolishing the hukou system. It’s no small task, to be sure and can only be done gradually. In 2012, the size of the floating population was about 230 million. A rough projection shows that by 2030, the floating population, made up mostly of migrant workers from the countryside, will reach more than 300 million.

My proposal is to gradually open the gate of urban hukou to all migrants within the next 15 years. This means granting hukou to about 20 million migrants per year. How should this annual quota be allocated? It could work in several steps over a period of 15 years from 2015: young college graduates would have first priority, followed by skilled workers and stable self-employed workers. Last but most important would be low-skilled workers. My approach is to begin with the easiest, building up broad support and momentum, and proceed to the harder part. This will be more in line with the country’s economic and fiscal reality. […] [Source]

Also see other recent Caixin editorials on hukou reform and urbanization (via CDT). Amid the current hukou management system, Beijing grants a small fraction of recent college graduates from other provinces (10,000 out of 145,000) local hukou, and allows a few other ways to establish local residency—marrying a local, starting a business capable of paying 3 million yuan in taxes over 3 years, or being recruited into the local government. The Global Times reports on the black market that exists as demand for a Beijing hukou far exceeds what legal avenues towards residency allow:

The fierce demand for Beijing hukou has fueled an underground trade for the prized document.

In one recently uncovered case, a Beijing hukou was sold at the price of 720,000 yuan, reported the Beijing News. Several agents reached by a Global Times reporter posing as a buyer offered their services at about 150,000 yuan for those holding an overseas postgraduate degree and about 400,000 yuan for those with domestic degrees.

They said fewer companies are being granted quotas and applicants had to fulfill the requirements of the company’s quotas, with looser requirements applied to those with foreign degrees. One agent, surnamed Guo, boasted that he has been in this business for several years and he had acquired Beijing hukou for himself. [Source]

A report from The Economist looks at trends in juvenille crime to note how the urban-rural gap puts youth affected by migrant labor at higher risk of committing and being incarcerated for unlawful acts:

The number of juvenile criminals sentenced by courts each year in China more than doubled from 2000 to 2008, to almost 89,000, at a time when the population of young people was dropping. (The number of offenders has since decreased.) But violent crime appears to be rising substantially as a proportion of juvenile offences. In a 2010 national survey, 16% of juvenile offenders were arrested for rape, a 42% increase from a decade before; and 12% were arrested for aggravated assault, a 69% rise.

National surveys and data from big cities point to two particularly serious social issues behind those bald statistics. First, more rural children are committing crimes, whether as migrants in cities or among the 60m youngsters left behind by parents who have migrated. Two-thirds of juvenile offenders in the 2010 national survey came from rural areas, up from just over half a decade earlier; and in many of China’s bigger cities, where rural migrants account for a substantial portion of the young population, they can account for as much as 90% of juvenile offenders.

This problem is compounded by the second issue: migrant and left-behind juveniles are far more likely to be incarcerated than their peers who were brought up in the cities, even though surveys suggest that urban young people commit proportionately about the same number of violent crimes as migrant young. In Shanghai, juveniles without local household registration were given suspended sentences (or probation) in only 15% of cases in 2010; locally registered young folk went free on suspended sentences 63% of the time. [Source]