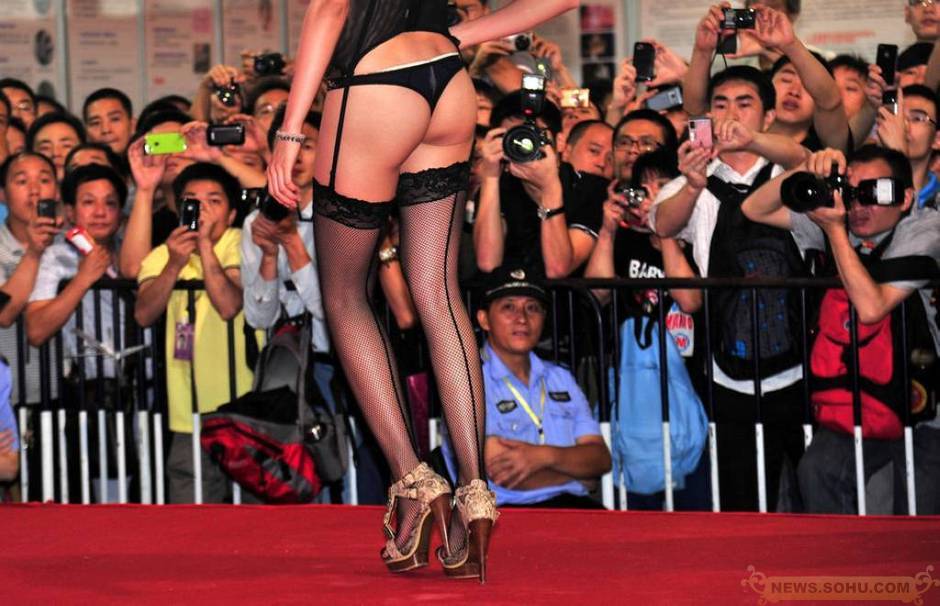 The 11th Annual National Sex Culture Festival (第十一届全国广州性文化节) was held in Guangzhou from November 8-10. A report from the New York Times describes the exposition as a place where capitalism and hedonism meet head on, all under the watch of the Communist Party:

Three decades after China began shedding its priggish Mao-era mores, sex is now a big business here. Across the country, pink-lit “hair salons” staffed by provocatively garbed women compete with massage parlors and late-night paid companions who slip their business cards under hotel room doors. Those looking to enhance their encounters can shop at countless “adult health product” stores and on the Internet.

In an attempt to give the sex festival a veneer of respectability, government-run medical organizations sponsored booths in a side room, which were, unsurprisingly, desolate. The main draw was lust.

Thousands of visitors, nearly all middle-aged men wielding cameras, poured through the aisles in search of any visible flesh. […] [Source]

Photo galleries from the Times or NetEase display scenes from the gathering, as does a video available on YouKu. The male-heavy attendance, directly reflecting China’s skewed gender ratio, is easily apparent.

Weeks after industry reps, models, sex toys, and potential patrons were gathered in Guangzhou, the government has ordered major Chinese Internet companies to clean up “obscene” and “lascivious” content. From Xinhua:

Popular websites, including news portal Sina, search engine Baidu and social networking Tianya, have been ordered to make changes after being found to have carried pornographic content, according to the National Office against Pornographic and Illegal Publications.

Authorities in Beijing have talked with the management of Sina and Baidu, ordering them to delete the vulgar content and clean up their blogging, file-sharing and social networking services. More than 145,000 posts containing vulgar information have been removed, and 103 user accounts were shut down.

Lu Wei Lays Out Four Rules for Being a “Good Netizen”