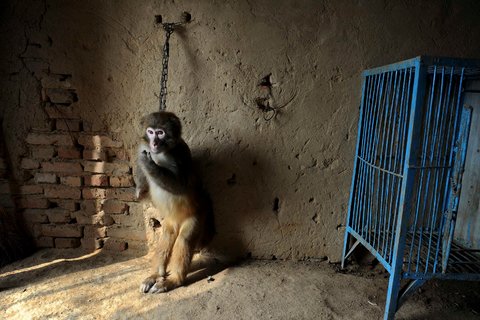 Chinese veterinarians, animal welfare advocates and ethicists say proposals by the State Forestry Administration to better “manage” wild animals may lead to their increased exploitation in the entertainment and traditional medicine industries, and strongly oppose the plan.

The proposals, dubbed the “Domestication and Breeding Licenses for Wild Animals,” would add two new licenses for wild animal use: in circuses and in “production and business,” according to those who have seen the official documents. This is in addition to three existing licenses, they said: rescue and protection, scientific research and popular science education.

[…] “These things — animal circuses and the trade in wild animals — have long existed and now they’re saying, let’s manage them better. So the government may mean to regulate and control it, but in the process it is legalizing it,” said Jin Yipeng, a professor at China Agricultural University in Beijing and a trained veterinarian, said after the event. “It’s a step backwards.”

[…] “The government can’t get away from seeing wild animals as a resource,” rather than a category of life that should be protected, said one animal welfare advocate who declined to give his name. [Source]

A post at Chinadialogue looks at data on the global black market trade of rhinoceros horn from the wildlife trade monitoring network Traffic to ask if China’s appetite for rhino horn is increasing:

“The rhino horn trade in China is more active than previously recognised and needs to be assessed more deeply,” said the international wildlife trade monitoring organisation Traffic earlier this year.

[…] The trafficking routes of rhino horns seized on their way into China vary in every case. Poached in Southern Africa, the rhino horns may be shipped in cargo holds from Cape Town or Maputo. They may also be transported to other African countries like Nigeria first and then shipped among timber or agricultural products to China. In other cases horns have been mailed or shipped to North America or Europe, and then flown on to China. [Source]

While traditional medicine and appetites for the exotic have long attracted criticism for fueling a global trade in protected animal products and promoting animal cruelty, a report from the Wall Street Journal notes that the retirement custom of “walking” birds in public parks along with continued development is a further threat to songbird populations:

On a recent weekend at the bird market near Fuchengmen on Beijing’s west side, dozens of older men sit in the sun surrounded by bird cages. One is jammed with a dozen small wild Common Redpoll birds—which sell for as little as 10 yuan ($1.65) for two—scrambling over one another, pushing against the bars of the cage. Another holds a large, brown-striped Mongolian lark singing a piercing song for 150 yuan.

Terry Townshend, a Beijing-based birdwatcher and birding blogger, sighs at the sight of so many captive wild birds. “I can’t believe they’ll survive very long” in captivity, he says.

Despite laws prohibiting the sale of wild songbirds without a license, it’s a common practice in Beijing and elsewhere in China. And what was once a quaint custom is today a practice that is cutting into a dwindling population.

As the country develops, birds are losing their habitat. For migratory birds, that means fewer areas to rest on their long tracks from Siberia to as far away as Australia and New Zealand, says Per Alstrom, a visiting ornithology professor at Beijing’s Chinese Academy of Sciences. [Source]