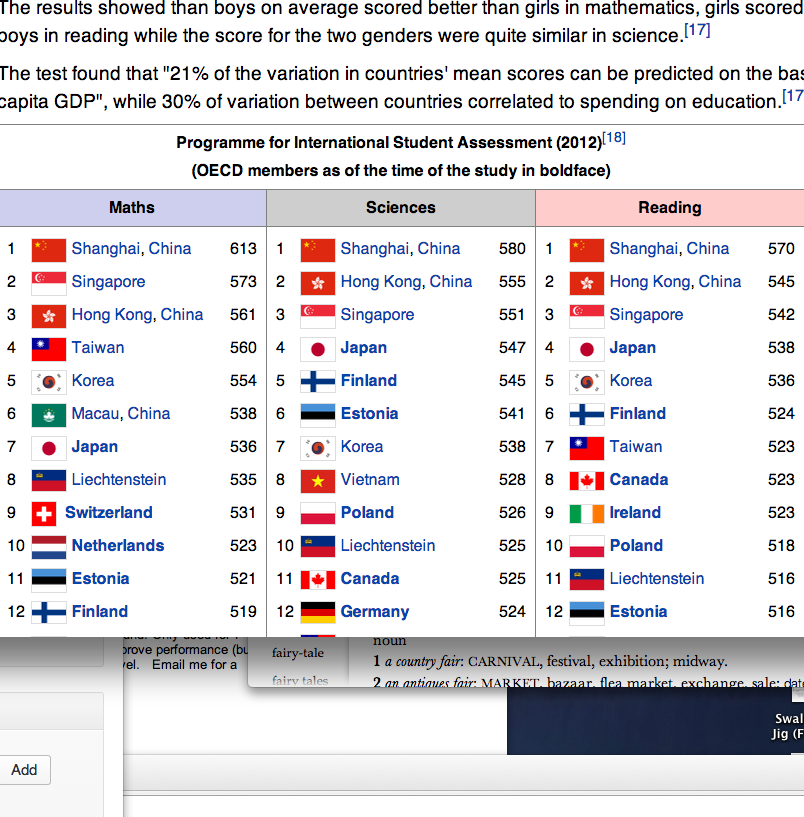 According to the recently released results of the OECD’s 2012 Programme for International Student Assessment (PISA), Shanghai 15-year-olds are at the top of global performance in mathematics, reading, and science. The Telegraph reports:

Shanghai has been crowned – for the second time – the champion of the Programme for International Student Assessment (PISA), an international ranking that compares the maths, reading and science skills of around 510,000 secondary school students around the world. Shanghai’s students came top of the global class in maths with an average score of 613 (up from 600 in the last PISA tests in 2010). That was 119 points, or the equivalent of nearly three years of schooling, above the average and placed Shanghai 25 places above Britain. Shanghai also came top in reading just ahead of Hong Kong and Singapore, which joined it on the podium in all three Pisa categories. Britain languished in 23rd place. Shanghai was also victorious in science (Britain came 21st) and excelled when it came to “top performers”. Twenty-five per cent of its students were placed in that bracket, the PISA results showed. [Source]

Shanghai beat its own 2009 results in all three disciplines. As Shanghai continues to climb in the rankings on the OECD’s assessment of secondary learning, the United States fell in all categories. Other east Asian regions also fared considerably better than their European counterparts on PISA. One analyst believes that this is an indication that creative thinking is taking hold in east Asia, an opinion contradicting common criticisms that China stifles creativity and encourages the test result-oriented rote learning. The Wall Street Journal reports:

The Organization for Economic Cooperation and Development Tuesday said its triennial testing of 510,000 students in 65 countries and regions around the world during 2012 found that the province of Shanghai in China once again produced the best results, followed by Singapore, Hong Kong, Taipei, South Korea, Macao and Japan. Tiny Liechtenstein, Switzerland and the Netherlands rounded off the top 10. Among Europe’s larger nations, Germany ranked 16th, France 25th, the U.K. 26th, Italy 32nd and Spain 33rd. […] Andreas Schleicher, special adviser to the OECD’s secretary-general, said that contrary to some characterizations such as the “Tiger Mom” stereotype, the success of east Asian students wasn’t down to endless hours of repetition. “East Asia is on a rapid track,” he said. “This is not a success of drilling. The emerging strength is in the ability to think creatively.” [Source]

Emma Vanbergen, a Shanghai-based study abroad director, doesn’t think that Schleicher’s assessment of east Asia accurately applies to Shanghai, though she does think that Shanghai reflects broader trends in China’s nationwide education system. From the Telegraph:

The best students are not in fact, super clever, great thinkers or the world’s future academics, they are simply extremely hard working, study machines who memorise and churn out answers for tests in mere minutes. They spend all their time on nothing but study, revision, homework, ‘pre-study’ (a term I’d never encountered until arriving in China), learning test techniques, and taking practice papers. Evenings, weekends, and even holidays are jam-packed with one activity after another with this sole aim in mind. In Shanghai this ‘cramming’ and out of class study is perhaps taken to greater extremes due to the considerable financial power of the parents involved. No expense is spared to insure children get top marks as parents are desperate to give their child whatever advantage possible at school. […] Shanghai is an extreme reflection of the Chinese system as a whole. The super competitive, overpopulated, high pressure nature of the schools, coupled with the significant financial backing of test fixated parents, means students are conditioned from a young age to out-perform the competition on tests. In that one respect, outperforming the majority of the world’s students on tests, in this case PISA, the system is clearly a great success. [Source]

While Vanbergen sees Shanghai as an “extreme reflection” of the flaws of China’s education system, a report from the Guardian presents Shanghai as an indication of national educational aspirations:

As China’s financial capital, Shanghai lies at the forefront of an ambitious national reform agenda – education authorities grant schools an unusual degree of curricular autonomy. While critics say China’s education system prioritises test-taking ability over creativity and critical thinking, the city is trying to buck the trend by introducing electives courses and phasing out multiple-choice tests. Yet Shanghai’s superiority reflects China’s ambition more than its reality. Its population is less than 2% of the country’s total, and its per capita GDP is more than twice the national average. According to Tom Loveless, an expert on education policy at Harvard University, 84% of its high school graduates enrol in college, compared with 24% nationwide. Although students from 12 provinces took the test in 2009, Loveless wrote on the Brookings Institution thinktank’s website, the Chinese government only shared Shanghai’s scores. “The OECD should be far more transparent than it has been about the agreements it has with the Chinese government concerning who is tested and which scores are released,” he wrote. [Source]

Slate also questions the legitimacy of allowing a municipality to compete internationally on the OECD study:

The three “countries” at the top of the PISA rankings are in fact cities—Shanghai, Singapore, and Hong Kong—as is No. 6, Macau. These are all big cities with great schools by any standards, but comparing them against large, geographically dispersed countries is a little misleading. Shanghai’s No. 1 spot on the rankings is particularly problematic. Singapore is an independent country, obviously, and Hong Kong and Macau are autonomous regions, but why just Shanghai and not the rest of China? […] [Source]

Also see the Brookings Institution report “PISA’s China Problem,” mentioned above, or a report from the Financial Times on the criticism China’s education system is subject to at home. For more more on PISA, see a recent blogpost from education researcher Sam Freedman.