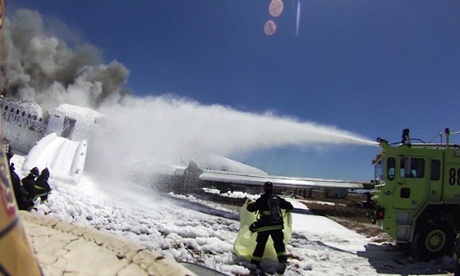 On July 6, 2013, the crash of an Asiana Airlines flight landing in San Francisco killed three Chinese teenagers traveling to the U.S. to attend summer camp. The third victim, 16-year-old Ye Mengyuan, survived the flight but then was killed after being run over by a rescue vehicle on the tarmac. Initially a California prosecutor declared the death accidental as her body was covered by fire-fighting foam amid a chaotic scene. But new footage obtained by CBS News shows that other first responders warned fire trucks about her presence as they were driving near the scene. From the Guardian:

The newly released footage has reignited controversy over Ye’s death, which a California prosecutor said was accidental and that the girl’s body was hidden by foam on the runway when she was struck after the crash, which killed three people and injured more than 180.

“Whoa, whoa, whoa! Stop, stop, stop!” the firefighter shouts before the driver stops and opens his door to talk. “There’s a body right there, right in front of you,” the firefighter says. About 15 minutes later Ye was run over, CBS reported. [Source]