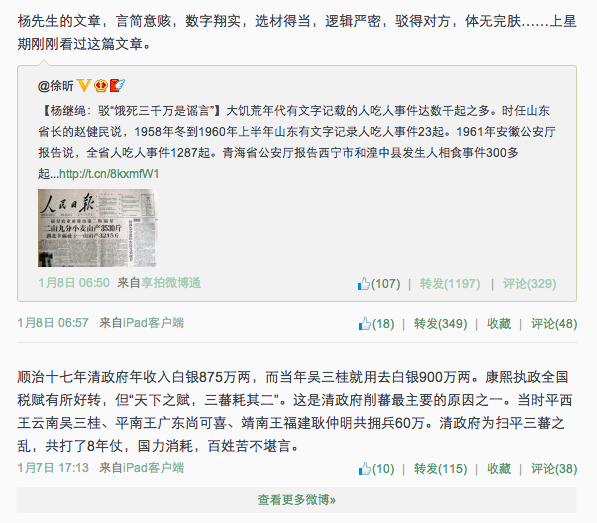 After central authorities began tightening their grip over the Internet last summer, China’s “Big V” celebrity microbloggers became primary targets in government efforts to gain control over online public opinion. One mechanism used in the ongoing Internet crackdown has been a campaign against online rumors—fit with a legal means to punish those whose false posts are forwarded more than 500 times or viewed by more than 5,000 people. Meanwhile, the following image, selected by CDT Chinese editors from FreeWeibo, was circulating on Chinese social media networks: In several years, my grandson will ask: Grandpa, were you one of the brave Internet-savvy who transformed China by standing up against tyranny and promoting democracy? I’ll say: No, child. But grandpa retweeted their weibo posts everyday. My grandson’s eyes will brim with reverence…

Around the same time, authorities laid out “Seven Base Lines” (七条底线), widening the definition of unacceptable online conduct to include much more than falsehood. In November, after an article from the Beijing Youth Daily [zh] told of Sina’s punishment of more than 100,000 Weibo accounts for breaching the new rules, netizen @隆裕太后 had this to say (also via FreeWeibo):

@隆裕太后：Zhang Qianfan, Zhang Lifan, and Murong Xuecun have been smothered… So what’s up with penalizing “100,000 Weibo accounts”? A strong nation sings of its endurance, and an ailing nation sings of its weakness. Without the spirit of independence and the freedom of thought, no nation can rise among the world of nations. Without sound modern rule of law, no country can sustain its path to glory. If a society cannot hear the sharp voices of criticism, than this society will undoubtedly perish under the euthanasia of laughter.