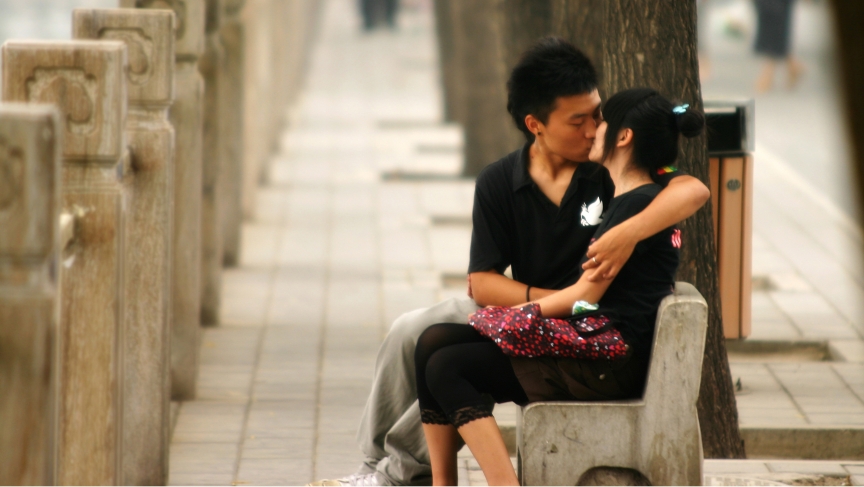 The South China Morning Post reports on Shanghai singles’ efforts to ensure that no lovestruck couples could sit side-by-side at the Valentine’s Day showing of Beijing Love Story (北京爱情故事) at a cinema in Shanghai’s Xintiandi district:

According to the Shanghai Morning Post, a group of internet users collaborated via a crowdfunding website to reserve every other seat at a Valentine’s night showing of Beijing Love Story at a movie theatre in the city’s Xintiandi shopping complex.

[…] “Want to see a movie on Valentine’s Day?” read an online message by the stunt organiser, who is known on the internet by the initials “UP”. “Sorry, you’ll have to sit separately. Absence makes the heart grow fonder. Give us singles a chance.”

“UP” described himself to the Shanghai Morning Post as a “computer nerd” who broke up with his girlfriend last year. The stunt was surprisingly difficult to pull off, he said. [Source]

Disappointed Shanghai couples will have another chance to festively enjoy a flick during China’s own holiday devoted to lovers on the other side of the lunar calendar. A country with a skewed sex-ratio, China is home to a huge number of young singles, who since 1993 have collectively celebrated their lonesome on November 11 (11/11). While Valentine’s Day is a significant contributor to revenue in the greeting card, confectionary, and flower industries of the West, China’s “Singles’ Day” set the global record for eCommerce last year. At the International Business Times, Michelle FlorCruz reports on the values and policies that have given rise to legions of unattached Chinese:

A mixture of changing societal values and old policies have contributed to China’s growing population of single people. The lasting effects of China’s One Child Policy, which was relaxed at the beginning of this year, can be seen in a subset of Chinese men that have been dubbed “bare branch bachelors.” As a result of the policy, Chinese families often resorted to abortion or infanticide of female babies to make sure they had boys, and that has created an extremely uneven gender distribution in the country. Recent research puts the ratio at roughly 122 males to every 100 females, making pairing off a woman’s game in China.

On the other hand, women have increasingly rejected the traditional notion of getting married and starting families in their early 20s as the population becomes more educated and career-oriented.

Despite these changes, the pressure to settle down can be felt by both genders. Single women in their late 20s and beyond are often given the unfortunate nickname of “leftover woman.” [Source]

On Valentine’s Day in China, PRI’s The World broadcast a China-focused story looking at the cultural relativity of romantic love:

Examining the cultural and chemical elements that make up love, the Catherine Winter reports from a marriage market in Shanghai. From PRI’s accompanying write-up:

[…] And Chinese culture may be changing when it comes to love and marriage.

Nowhere is that more apparent than in the marriage markets that have sprung up in Chinese cities in recent years. As millions of people have migrated to urban areas, old ways of negotiating matches have become impossible. You can’t consult with the neighbors if you don’t know the neighbors.

On a recent weekend in Shanghai, people looking for spouses filled People’s Park to look at personal ads laid out on the sidewalk or attached to walls. Many were parents looking for spouses for their adult children — sometimes without the children’s knowledge. Some opened umbrellas, set them on the sidewalk and clipped laminated sheets of paper to them, listing their children’s vital statistics — age, height, income.

Zhou Yun, senior matchmaker at Shanghai Hongyan Matchmaking Company, was at the market to help arrange meetings, for a fee. She says things have changed since she was a girl. […] [Source]

Women Shut Out of Wealth Accumulation

Tired Of Being Alone?: Singles’ Day Offers A Fix