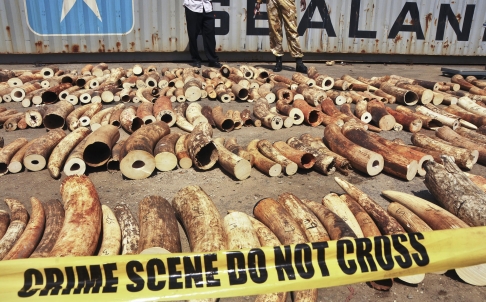 The AP reports on the apprehension and extradition of an alleged Chinese ivory smuggler in Kenya on Monday:

A suspected Chinese ivory smuggler has been apprehended in Kenya and extradited in the first time that China has arrested a wildlife crime suspect overseas, the country’s official news agency reported on Monday.

[…] Kenyan authorities working with Chinese customs officials and police apprehended the suspect with the surname Xue in Nairobi on January 17 and extradited him a day later, Xinhua said, citing China’s Endangered Species Import and Export Management Office. A man from the office’s law enforcement branch said the Xinhua report was accurate, but wouldn’t give further details. [Source]

The Guardian reports on the detention of two suspects linked to Xue—one a repeat offender who had earlier led authorities to Xue—while entering China:

Two other suspects – Xue’s girlfriend, a woman surnamed Li, and a man surnamed Zheng – were detained while trying to enter China in the days following Xue’s arrest, Xinhua reported.

[…] Zheng was allegedly caught smuggling ivory at an airport in north-east China in November 2013. Customs staff said they stopped him after an X-ray scanner showed that his suitcase was densely packed with spherical bags. Zheng told the inspectors that the bags contained nuts – gifts for his children – and opened one to prove his point; yet inspectors said some bags buried deep in the suitcase were significantly heavier and contained more than 1,200 ivory beads, weighing 8.77kg.

Zheng was detained, and ultimately led police to Xue, the group’s suspected ringleader, in Nairobi. [Source]

Xue’s extradition and the detention of his associates come as part of a China-led international campaign against illegal wildlife trafficking. A report from the South China Morning Post summarizes the campaign, known as Operation Cobra II:

The arrests were the first major success of Operation Cobra II, a campaign between 28 countries, including China, the United States and South Africa, to crack down on the illegal trade in protected species of wildlife.

Shi Jianbin, the China head of Traffic, a global network that monitors the trade, said the operation had uncovered a few hundred cases and a similar number of suspects had been arrested. About 60 per cent of the cases involve China.

“This reflects the reality that China is one of the countries where the illegal wildlife trade is most rampant,” he said. “It’s also a result of the tough measures China’s law enforcement agencies have taken against wildlife crimes.”

China is the largest market for illegal ivory and Kenya one of the main sources, even though elephant hunting is banned in the east African country. [Source

Last month, Beijing destroyed six tons of confiscated elephant tusks and carved ivory, a move that was praised widely by conservation groups while also criticized as being only a half measure in a country whose legal ivory trade does much to conceal the black market. Reporting from an antiques market in Beijing, the Telegraph’s Malcolm Moore looks at how China’s yearning for ivory and legal trade could prove to be a hurdle to international campaigns against the trafficking of wildlife:

As a high-level summit to combat wildlife trafficking and poaching opens in London on Wednesday, hosted by Prince Charles and the Duke of Cambridge, shifting Chinese attitudes towards ivory will be one of the most important goals, given that it is the world’s most populous nation with a strong appetite for elephant tusk.

It will not be easy, as Fu Junjun, who works at her father’s ivory shop in the 11-floor market, testified.

“The price of ivory keeps going up, and the government’s decision to destroy that ivory stockpile actually helped us,” she said, referring to the recent crushing of six tons by the Chinese authorities.

“The smaller stores now find it harder to get a good supply, but bigger stores like us have hardly felt any impact and it helped put the price up.” […] [Source]